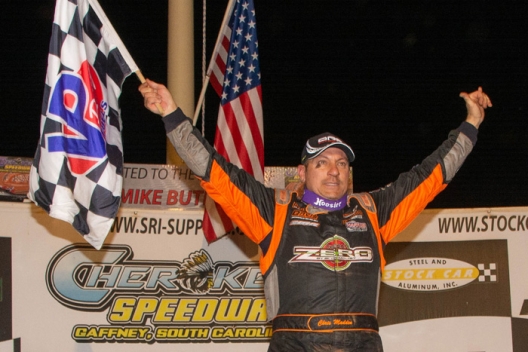 GAFFNEY, S.C. — Continuing the stellar second half of his 2019 campaign, Chris Madden of Gray Court, S.C., raced to a $10,000 victory Sunday evening at Cherokee Speedway. The seventh-starting Madden passed Jimmy Owens of Newport, Tenn., on lap 30 and led the rest of the way to win the 29th annual Blue-Gray 100, which was co-sanctioned by the Carolina Clash Series and the fledgling Xtreme DIRTcar Winter Series.

On the final restart, Owens, who started alongside Madden on the fourth row, gave up the second spot to Ross Bailes of Clover, S.C., who rallied from sixth to grab the runner-up position behind the wheel of Johnny Pursley's Longhorn Chassis. Owens, driving Alabama car owner Tommy Pope’s No. 22, settled for third after leading early. Michael Brown of Pageland, S.C., slipped to fourth after starting second, while third-starting Brandon Overton of Evans, Ga., dropped two spots to fifth in his second outing in the Wells Motorsports Longhorn.

While a victory by Madden in the second half of the season has become relatively old hat — he has nine wins since joining Scott Bloomquist Racing in July — so too has his prowess in the Blue-Gray 100. This was his sixth win in Cherokee’s signature event, with previous victories coming in 2004, '06 '10, '13 and '15.

“Man it’s been totally awesome ever since me and Scott (Bloomquist) put this deal together. And Cody (Sommer), he’s been a blessing to me and Scott both,” said Madden/ “That guy works his butt off behind the scenes. Man what a special person Cody Sommer is to us. Scott, he’s at home watching. … I got us another one brother.

“I can’t wait to get next year started. Scott’s going to (Georgia’s) Cochran (Motor Speedway) next week, so maybe he can pick up another win for us next week and we’ll keep on rolling.”

One of his favorite tracks, Madden certainly knows how to roll around Cherokee Speedway. He’s started 21 of the 29 Blue-Gray 100s, recording 18 top-10 finishes, 11 top-fives and three runner-up finishes to go with his six wins. The only position he’s finished in more than first is sixth place, which he’s done five times.

Polesitter Zack Mitchell of Enoree, S.C., led a handful of laps early before giving way to Owens, who used momentum on the topside to power into the lead. Following Owens to the front, Madden made his way to second just a few circuits later and tracking down the leader, he made his winning pass on lap 30.

Once in front, Madden made sure it was another victory he recorded, rather than another sixth-place finish as he cruised the rest of the way unchallenged. Bailes was in the right spot at the right time and managed to steal second from Owens following a late restart.

“I was telling Jimmy it seems like every year in this race I’m running third when it rubbers up and the second-place man choses the inside and it always works for me,” Bailes. “It worked again this year. I was hoping I’d get one more (position). I new once Chris and Jimmy got by me early in the race it was gonna be hard to get back by those guys. They did a good job and the track was in good shape, so we had a good run.”

Notes: Chris Madden was a bit emotional in victory lane as he dedicated the win to a close friend. “Man … I’m really kinda lost for words here,” said Madden. “We came into this deal this weekend with a dear friend of mine, Hoss, lost his daughter. So, you know … so it couldn’t happen at a better time, you know, to get a win for Hoss. He come over here today. Him and Cody, her son, were here. Lee Cooper and all of his family are really close with her. We have to dedicate this race today to her.” … Chris Ferguson of Mount Holly. N.C., endured a hard crash when, on a lap-eight restart, contact between he and Jimmy Owens sent Ferguson careening into a tire barrier at the infield entrance near turn three. Ferguson later said via his Facebook page that he was OK, but his heavily damaged car would need a new front clip or possibly a complete frame. He added that it was just a racing incident. … Owens was a bit hoarse following the race and didn’t give a post-race interview due to his scratchy voice. … The biggest pileup came on lap 86 when when Trent Ivey spun, collecting Brett Hamm. Derrick Ramey, Matthew Nance and Corey Gordon were also caught up. Ivey pitted and returned to finish sixth. ... The race was the Carolina Clash season-finale and the opener for the recently rebranded and newly-formed Xtreme DIRTcar Winter Series.