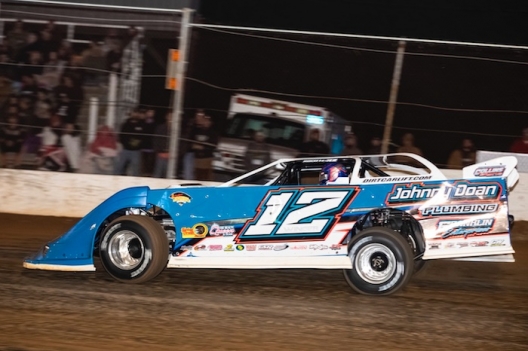 MERIDIAN, Miss. (Nov. 16) — Finding a balance between a steady pace and an all-out charge was paramount to Ashton Winger’s success Saturday at Whynot Motorsports Park. The Hampton, Ga., driver found just the right blend in winning a career-high $15,000 in the 25th annual Coors Light Fall Classic.

Winger, who started sixth, took the lead from Tyler Erb of New Waverly, Texas, on lap 60 and pulled away to lead the final 40 laps. He finished a comfortable 1.583 seconds ahead of Erb, while denying the young Texan his first ever victory in a 100-lap main event.

Winger, who was up to third by lap 17, cleared Lanigan for second following a lap-30 restart and doggedly pursued Erb over the next 30 circuits. Getting by Lanigan early gave Winger plenty to time to concentrate on Erb.

“I think it was huge,” said Winger of his pass on Lanigan. “The racetrack never cleaned up I felt like. It was really racy the whole time, but it got so slick that it was really hard to pass. I’m not sure, but it looked like Darrell pushed a little bit. I don’t know what happened there, if he just pushed or if him and Tyler got together a little bit. I was so focused on what I was doing.

“But it was huge because even whenever me and Tyler lined up next to each other (on two more restarts) I actually went down into (turn) one and did something a little bit different obviously trying to drive by him for the lead. It didn’t work out, but it actually showed me that there was another line there … what I wasn’t doing (correctly). So I think that was a really, really big part of it. Obviously the pass for the lead is the biggest one, but that one on Lanigan was really big too I think.”

Once in second, Winger continued to pace himself. Erb, who led laps 12 through 59 after taking the lead from Dalton Cook, was briefly held up behind a slower car, giving the trailing Winger a perfect opportunity to pounce.

“It was just one mistake behind a lapped car. I followed the 94 (Austin Rettig) too long,” said Erb. “I wasn’t gonna take the lead early, but I was just running the bottom there. I think I ran a really good race except for following (Rettig) for one lap too long on the bottom. I was following the 44 (Dalton Cook) and my lead went to nothing, so I got up the track and just barely got by him. Then I caught the 94 (Rettig).”

Winger rolled by to lead lap 60 and began to pull away. The race was slowed by caution — the fourth of the race — one more time after Winger took the point, but went caution-free over the final 34 laps, giving Winger a chance to exercise his pre-race strategy.

“I told everyone that I really wanted to get somewhere inside the top five and just sit there and ride for 40 or 50 (laps), but you just never know with the tires,” said Winger. “Like (Friday), we blistered three right rear tires. Yeah they’re all soft tires, but we blistered tree of them and I’ve never blistered a tire here in the five to six times I’ve raced here.

“I just wanted to get out there and run smooth and consistent for as long as I could and just pick one (position) off when I could. It all worked out and the cautions fell our way a little bit. Once I got out front, I had a pretty good idea of what I needed to do. It was really, really difficult early because it was patchy where there was some moisture on the racetrack.

“You know it’s kinda deceiving where you could run around that top and make up probably a couple of tenths, but the problem is you risk knocking the spoiler off. It was really harder earlier (to set a conservative pace) than it was later. I really felt like the longer we went and the more green flag laps we had the better I would be, so I was way more comfortable.”

The fourth-starting Erb, who has two top-five finishes in the last three Fall Classics, had a strategy of his own. And it almost came to fruition.

“I know I said I wasn’t gonna push it, but when I took the lead (from Cook) off of turn two, I was just running half throttle,” said Erb. “I was following those guys and they got out about a straightaway from me, but in about three laps they came right back to me. I was just running the middle there, searching around.

“When I passed them, I really thought a caution had come out. They kept saying over the Raceceiver to the lapped cars that you’re getting lapped, you’re getting lapped. When I went by them off of (turn) two, I was like, they must have thrown a caution. I was feeling really good and didn’t really think I was pushing it.”

Lanigan, making just his second career Coors Light Fall Nationals start, was never able to challenge for the lead after watching fellow front-row starter Cook, of Smiths Station, Ala., grab the lead on the opening lap. He stayed in second until Winger went by on lap 32. With 10 laps remaining, he managed to get close enough to Erb to look under his left quarterpanel, but was unable to make the pass.

“Definitely being in the lead makes a big difference, but I don’t know … we were a little free there at the end,” said Lanigan. “We needed a little bit. But all in all, we had a good weekend for (car owner) Randy (Thompson). I got under (Tyler Erb) there once, but that top had a little bit of momentum going and it was hard to clear him there. If I had a few more laps I might have been (able to pass Tyler Erb), but it was just hard to pass there at the end.”

Notes: There hasn’t been a repeat winner in the last 11 Fall Classics. … The win was Winger’s eighth of the season and third at Whynot. He won a Mississippi State Championship Challenge race there on April 20 — his first win of the season — and captured a Durrence Layne Chevrolet Series feature at the 1/4-mile oval on May 26. … The three victories give Winger $20,500 in first-place winnings at Whynot this season. … It was Winger’s second five-figure payday of 2019 following a $10,025 Schaeffer’s Fall Nationals win at Senoia (Ga.) Raceway on Sept. 29. … Last year’s winner, Devin Moran of Dresden, Ohio, ran in the top five for much of the race before settling for sixth. … Fourteen cars finished the race with nine completing all 100 laps. … David Breazeale’s bid for a third Fall Classic triumph ended with a ninth-place finish. … After leading the first 11 laps, second-starting Dalton Cook finished 14th, three laps off the pace.

The first call for Super Late Model drivers to line up (unbuckled and no helmets) was made at 6:36 p.m. ... After a chilly Friday night with temperatures dipping into the upper 30s, Saturday’s action began with a bit milder weather treating drivers and fans. With temp peaking near 60 degrees on Saturday, hot laps got underway at 4:30 p.m. as track officials hoped to beat the dropping mercury. … This year’s Fall Classic drew six fewer entries than the ’18 version, yet there were 19 drivers who attended last season who were not in attendance this year. …  After finishing second in the last two Fall Classics, Brandon Overton of Evans, Ga., is among those not in attendance this season. … The Fall Classic has been held at three different venues: Whynot (1995-98; 2006-present), Queen City Speedway on the west side of Meridian (1999-’04) and Jackson (Miss.) Motor Speedway (’05). … For the second year in a row, there are just two former winners in the starting lineup and David Breazeale of Four Corners, Miss., is again one of the two, joining last year’s winner Devin Moran of Dresden, Ohio. … Breazeale has a chance at a third Fall Classic victory. Of the event’s five two-time winners — Breazeale, Brian Birkhofer, Don O’Neal, Jim McDuffie and Mike Boland — only Breazeale, who won at Jackson (’05) and Whynot (’16), entered this year’s event. … Half of the 16 drivers who qualified through Friday’s heats were in the starting lineup last year also. … Las Cruces, N.M. driver Garrett Alberson’s night ended when he was caught up in a crash on the opening lap of the second consolation race. … Overall fast qualifier Jason Taylor of Amite, La., failed to transfer to the main event. Taylor pulled off the track while running last in the first consy. … No driver improved from qualifying to the end of the heats more than Justin McRee. The Woodstock, Ala., native qualified 15th in his group and started eighth in his heat before rallying to make he main event.

Sixteen cars are locked into Saturday’s 100-lap feature, with a pair of consolation races on tap to set the remainder of the 24-car field. In an effort to get ahead of expected cold weather, Saturday’s drivers’ meeting is scheduled for 3:30 p.m., with hot laps to follow at 4 p.m.

With the track getting faster throughout time trials, Jason Taylor of Amite, La., turned the overall quick lap among the 37 entries for Saturday’s 25th annual Coors Light Fall Classic. Taylor was the fifth driver in Group B to take the clock. His second lap of 14.121 seconds was easily quicker than Devin Moran’s time of 14.361 seconds. Moran, the 2018 Fall Classic winner, was the last driver to take the track, but still managed to turn the second quickest time overall. Taylor earned the pole position for the night’s first heat race, while Moran starts from the pole of the third heat.

Earning the pole for the second heat, Rick Rickman of Columbus, Miss., toured the 1/4-mile oval in 14.466 seconds, while Tyler Erb of New Waverly, Texas, stopped the clock at 14.577 seconds to claim the pole position for the fourth heat.

The track was a long way from last season’s record-setting speeds — Dane Dacus of Lakeland, Tenn., set the Whynot Motorsports Park track record at 11.928 seconds during qualifying for last year’s Fall Classic — but 24 of the 37 qualifiers did manage to dip into the 14-second bracket. Nineteen of the drivers clocked their fastest time on their second lap, including 11 in Group B.