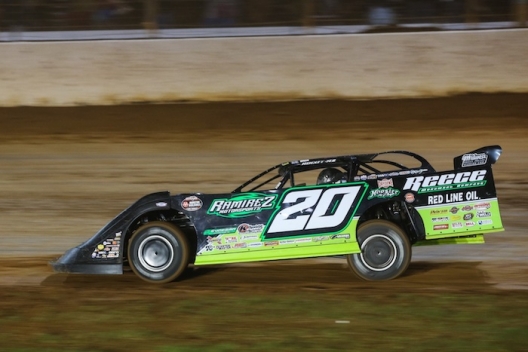 CONCORD, N.C. (Nov. 9) — Five years between Can-Am World Finals victories? Jimmy Owens of Newport, Tenn., was admittedly amazed when he was told the date of his last success in the annual season-ending World of Outlaws Morton Buildings Late Model Series event — a dry spell that he snapped with a $12,000 triumph in Saturday night’s 50-lap feature at The Dirt Track at Charlotte.

“Time does fly,” Owens said while standing alongside his Ramirez Motorsports in the frosty autumn air following Saturday’s A-main. “It doesn’t seem like it’s been that long since we’ve been in victory lane here.”

Owens, 47, is the winningest driver in World Finals history with seven victories after beating late-charging WoO Rookie of the Year Ricky Weiss of Headingley, Manitoba, to the finish line by 0.519 of a second, but all six of his previous checkered flags came from 2009-14. He finished no better than fourth in his three World Finals appearances since 2014 (he didn’t enter the ’16 edition) and last year didn’t qualify for the first feature and placed a dismal 17th in the finale.

With last year’s subpar outing still fresh in his mind, Owens was clearly satisfied to find himself never relinquishing the lead in Saturday’s headliner after seizing command for good on lap 21 from Jonathan Davenport of Blairsville, Ga.

“We didn’t run worth a flip last year,” Owens said, “so to come back this year and put this car up front is pretty awesome.”

The 31-year-old Weiss overtook Davenport for second on a lap-33 restart and fought off challenges from Dale McDowell of Chickamauga, Ga., while making a late run at Owens. But while Weiss drew his Bloomquist machine within a few car lengths of Owens with two laps to go, his bid fell short and he settled for his seventh runner-up WoO finish without a win this season.

McDowell, 53, finished third after starting 11th behind the wheel of his brother Shane’s Bloomquist car. Mike Marlar of Winfield, Tenn., made a late surge in his General Lee-lookalike XR1 Rocket car to place fourth (he was seventh at the lap-33 caution flag) and Friday-night winner Chris Madden of Gray Court, S.C., completed the top five in his Scott Bloomquist Racing team car.

Brandon Sheppard of New Berlin, Ill., who entered the weekend having already clinched the 2019 WoO points title, was officially crowned the champion of the national tour for the second time in three years in official ceremonies held on the homestretch after the A-main. He wasn’t a factor in the feature — he stopped on the backstretch running 12th on lap 23 to bring out a caution flag and went on to finish 11th in the Rocket Chassis house car — as he placed outside the top five in consecutive WoO races for the first time this season and failed to nab the one victory he needed to set the tour’s single-season win record, but the quiet World Finals didn’t diminish his spectacular campaign.

“It was just a phenomenal year,” said Sheppard, who will receive his $100,000 champion’s check during the WoO awards banquet on Sunday night at the Great Wolf Lodge in Concord, N.C. “I can’t say enough about my team. They’re just the best group of guys you could ever work with. They do such a phenomenal job on this race car and it’s a dream to drive.

“We wanted that 19th win (to establish a new single-season win mark) real bad, but like I told a few guys earlier, it gives me something to chase next year,” he added. “That record’s still out there and we’ve tied it twice now (he shares the 18-win standard with Josh Richards of Shinnston, W.Va.) so it’s definitely doable. As hard as my guys work, I don’t see no reason why we can’t have another good year next year.”

Witnessing Sheppard celebrate his WoO points crown was a quite familiar situation for Owens, who has recorded six of his seven career World Finals triumphs in the weekend’s Saturday-night finale. That means Owens has grown accustomed to having his own victory lane celebration overshadowed by the championship hoopla.

“It ain’t no big deal,” Owens said with a laugh when asked how winning the World Finals finale so often has, in a manner of speaking, tended to take some attention from his achievement. “The first couple of times it kind of bothered me, but you know what? It’s a World of Outlaws show. It’s all about those guys, so let them have their fun (celebrating their championship seasons). We’ve been there and done that and enjoyed it.

“I’d be alright if they just let me come back to the hauler,” the low-key driver added. “We don’t celebrate a whole lot. But it’s always cool to win here. I mean, it’s a big event. A huge crowd … it’s awesome to win in front of this crowd. It may not be the biggest crowd we race in front of, but it sure seems like it.”

Owens made Charlotte’s packed grandstand take notice of him early in the feature. He shot from the fourth starting spot to the lead by lap six, passing John Blankenship of Knoxville, Tenn., to grab control after the race’s first caution flag was displayed on lap five when Brian Birkhofer of Muscatine, Iowa, slowed in turn two.

“It really surprised we was able to get by J.D. (third-starting Davenport) and them guys (front-row starters Shane Clanton of Zebulon, Ga., and Blankenship) that early,” said Owens, who took advantage of the 3/8-mile oval’s racy surface. “The track was way better tonight. It was more versatile. We had up high and down low. We had multiple grooves, where last night was a lot drier and it kind rubbered up on us.”

Owens briefly lost the lead to Davenport on lap 20 while working through lapped traffic. The following circuit, however, Owens moved back in front as Davenport scraped the homestretch wall and then never relinquished the spot for the remainder of the distance.

“He just kind of got in lapped traffic,” Owens said, explaining how he regained the lead from Davenport. “He was on the high side and a lapped car kind of slid up in front of him and bottled us all up there, and I just had the preferred line. It just worked out for me there.

“After that, I just moved up and got to where he was at and was able to go on.”

With Davenport’s 2-race-old Longhorn car sporting right-rear bodywork damage from his encounter with the outside concrete on lap 21, he found himself unable to pressure Owens following the lap-23 caution period for Sheppard. Then Davenport lost second place to the sixth-starting Weiss on a lap-33 restart, which came after Ross Bailes of Clover, S.C., slowed with mechanical trouble and received a bump from behind that spun him on the homestretch.

As Davenport faded to a sixth-place finish over the final 17 circuits, Weiss turned up the wick in pursuit of his elusive first-ever WoO victory. He flashed some extra aggressiveness, first pulling a slider in turns one and two to snatch second from Davenport and then repelling Davenport’s attempt to regain the spot on lap 35 by crossing under him off turn two. Weiss later sailed around the 3/8-mile oval’s cushion to fend off McDowell, who nosed ahead of Weiss for second on lap 44.

But Weiss couldn’t summon enough speed to get on the WoO win list in the final start of his successful rookie season.

“We tried everything we could,” said Weiss, who entered the race fifth in the points standings but vaulted up to a third-place finish in the standings (increasing his points-fund take from $30,000 to $40,000). “We were gaining, gaining and gaining (on Owens). I looked up and I seen 45 (laps) and then Dale got under me, and that was one of the hardest five laps I’ve ever driven in my life.

“I didn’t want to give up second. I knew second was gonna be pretty good in gaining us some points there, but I really wanted to get that win so we were just driving as hard as we can drive. I was hoping the tires would stay underneath me and maybe a lapped car would hold (Owens) up just a little bit.”

Owens made the right moves in the race’s final moments to tally his third WoO triumph of the season. He previously won on March 23 at Smoky Mountain Speedway in Maryville, Tenn., and July 24 at Davenport (Iowa) Speedway.

“I just know the laps I was running and the area I was running, it felt way slower than it needed to be,” said Owens, who registered the 15th WoO win of his career. “I couldn’t hardly move up because my car was way too tight, but we was able to hold ‘em off there by getting through the traffic a little better.”

McDowell, who fell one spot short of matching his career-best World Finals finish of second (2008), was pleased with his performance but expressed some agitation with Weiss’s aggressiveness in a post-race interview over the p.a. system.

“Ricky and I raced last night and he didn’t leave me quite as much room, and I want him to watch this video and realize that I left him room,” said McDowell, who previously finished third in World Finals A-mains in 2008 and ’11. “But that’s how I liked to be raced and I like to race. It’s just one of those deals. It’ll all come around. It was fun battling there.”

Clanton slid from his pole starting spot to a 12th-place finish, but it was enough for him to claim the $60,000 runner-up spot in the WoO points standings by 10 points over Weiss. Chase Junghans of Manhattan, Kan., finished fourth in the standings (16 points behind Clanton) after an 18th-place run and Darrell Lanigan of Union, Ky., took fifth in the points (36 points in arrears of Clanton) after struggling to a 19th-place result.