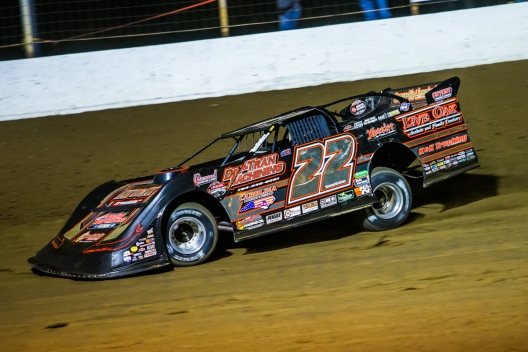 Clocking the night’s overall fast time and winning the first heat race, Ferguson was the top points earner in Group A, securing the pole position for Saturday’s $100,000-to-win main event. Clanton was also among Friday’s heat race winners, garnering the most points in Group B to start outside the front row.

Sixteen drivers were locked in to Saturday’s feature based on points earned in Friday’s time trials and heat races. A pair of consolations and series and track provisionals will set the remainder of the feature lineup.

Rolling around the high side, outside polesitter Jason Jameson took an early lead. Dave Hornikel and Bobby Pierce battled for second in the early running, with Pierce pulling ahead on lap five. After starting sixth, Tim McCreadie advanced to run in fourth by lap six, fighting off Tyler Carpenter. A yellow flag waved on lap seven when McCreadie slowed on the backstretch with a flat right-rear tire. Pierce challenged Jameson on the restart, the pair crossing the line nearly side-by-side on lap eight. Another caution fell on lap 10 when Charlie Jude slowed off the pace. Sliding ahead of Jameson out of turn four, Pierce led the 11th circuit. Jameson lost another spot to Kyle Bronson on the following lap, with McCreadie charging from the tail to run in third. Pierce won the heat, with Bronson and McCreadie finishing second and third.

With outside polesitter Devin Moran slipping in turn one, fellow front-row starter Chub Frank pulled ahead to lead the opening lap. It was a three-car battle for third in the early running, with fifth-starting Shane Clanton overtaking Shannon Thornsberry and Brandon Fouts on the fourth lap. Continuing his charge to the front, Clanton shot ahead of second-running Moran on lap six, edging ahead of Frank at the line to lead the seventh circuit. A yellow flag flew on the eighth lap when Earl Pearson Jr. slowed off the pace, getting a push to the infield. Moran challenged Clanton for the lead on the restart, with another caution falling on lap nine when Fouts spun on the frontstretch. Maintaining his lead, Clanton won the heat, with Moran running second and Frank finishing third.

Polesitter Don O’Neal charged to the lead at the drop of the green flag, with Mike Marlar powering from fifth to second on the first lap. Along with Marlar, Jimmy Owens as on the move early, advancing from sixth to run in fourth on lap four. Don O’Neal held a comfortable lead at the halfway point, as Owens attempted to reel in third-running Hudson O’Neal. The top-two cars distancing themselves from the field late-race, Don O’Neal won the head, with Marlar and Hudson O’Neal rounding out the podium.

Pulling ahead of fellow front-row starter R.J. Conley out of turn two, polesitter Scott Bloomquist led the opening circuit, quickly extending his lead. Bloomquist held a full straightaway advantage by the fifth lap, with a yellow flag waving vwhen Robert Starett spun in the bottom of turn four. Using the restart to his advantage, Jason Covert shot to second, with Josh Richards advancing from sixth to third by lap seven. Charging the high side, Richards battled Covert, taking the second-place spot on the 11th lap. Holding more than a 4-second lead, Bloomquist won the heat.

With outside polesitter Ricky Weiss taking an early lead, a yellow flag flew on the first lap when Blake Naylor came to a stop in turn three. Overtaking polesitter Justin Rattliff in turns one and two, fourth-starting Jonathan Davenport pulled ahead of Weiss out of turn four to lead the second circuit. Fifth-starting Tyler Erb was on the move early, running in second by the fifth lap. A yellow flag waved on lap six when Rattliff slowed off the pace, retiring to the pit area. Davenport continued to show the way out front at the halfway mark, with Erb attempting to reel in the race leader. Erb closed the distance to less than a car’s length late-race, but was unable to seriously challenge for the lead.

Third-starting Scott James shot ahead the front-row starters Billy Moyer Jr. and Zack Dohm down the backstretch to lead the opening lap, with Shanon Buckingham in tow. As second-starting Dohm slipped to the rear of the field in the early running, Chris Ferguson made his way from the sixth starting spot to run in third by the fourth lap. A yellow flag waved on lap four when Allen Murray slowed off the pace. James held his lead on the restart, with Ferguson overtaking Buckingham for second. The top two cars began pulling away from the field at the halfway mark, with James holding a comfortable lead. James won the heat, with Ferguson and Buckingham rounding out the podium.

The 39th annual Rhino Ag Dirt Track World Championship at Portsmouth Raceway Park kicks off on a crisp fall day with sunny skies and temperatures peaking in the low 60s but expected to drop steadily during the night. … Friday’s 66-car field is up considerably from the 49 entries for last year’s event, which was contested one week after the rain-postponed completion of the World 100 at Eldora Speedway in Rossburg, Ohio. … The most eye-catching car in Portsmouth’s packed pit area belongs to Mike Marlar of Winfield, Tenn., who unloaded an orange No. 01 that resembles the famous General Lee machine from the Dukes of Hazard television series. … John Blankenship of Knoxville, Tenn., was scheduled to make one of his rare 2019 starts at Portsmouth, but he informed his car’s crew chief, Tom Buckingham, early Friday afternoon that he would not be able to make the trip. With Blankenship’s No. 23 already at the track, Buckingham tapped his crewman, Eric Webber of Morristown, Tenn., to pilot the car; a Late Model racer at such tracks as Tazewell (Tenn.) Speedway, Webber borrowed a uniform from Shane Clanton of Zebulon, Ga., because he did not one of his own along. … Ricky Thornton Jr. of Chandler, Ariz., is driving a second SSI Motorsports car as a teammate to Hudson O’Neal of Martinsville, Ind. … Dale McDowell of Chickamauga, Ga., is behind the wheel of the No. 18 normally driven by his teammate Brandon Kinzer of Allen, Ky. … The Wheelersburg, Ohio-based Conley Motorsports team is out in full force with four entries: family patriarch Delmas leads the charge that includes his sons R.J. and Rod and his grandson J.T. (R.J.’s son). … The youngest entrant in the field is 14-year-old Drake Troutman of Hyndman, Pa., who is making his DTWC debut in his grandfather Dave Troutman’s Dirt Late Model. Drake competed in Thursday’s modified program at PRP but failed to qualify after breaking a driveshaft in a B-main.

After four seasons of using the double-heat race format and passing points to determine feature starters, the DTWC returns to its more traditional format this year. Friday’s program will include time trials and heat races, with consolations and the 100-lap, $100,000-to-win finale slated for Saturday.

Friday's qualifying program isn't using the typical Lucas Oil Series format, however. Drivers will earn points for their results in time trials (100 for group fast time, 98 for second, 96 for third, etc.) and heat-race finishing positions (105 for first, 97 for second, 94 for third and a three-point decrease thereafter); the top-16 racers in the combined points will lock into Saturday's A-main with the remainder aligning heads-up from points results in Saturday's B-mains. In addition, Friday's heat races will have a six-car invert from time trials.

Josh Richards of Shinnston, W.Va., is the two-time and defending DTWC winner. Mike Marlar of Winfield, Tenn., and Jonathan Davenport of Blairsville, Ga., won the two prior Lucas Oil Series stops at Portsmouth this year.