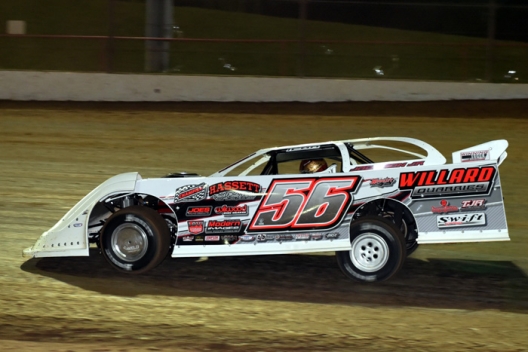 Jackson, of Lebanon, Mo., bounced back from a poor first night of the doubleheader by leading all 40 laps to take the $3,000 winner's check, finishing 4.3 seconds in front of runner-up Payton Looney. Vaught, meanwhile, finished third and the Crane, Mo., drivers's 33rd birthday turned into a celebration of his first Lucas Oil MLRA championship.

Jackson spun on lap one of Saturday's $5,000 feature — won by Ryan Gustin — and wound up 18th. He made up for it by dominating the final race of the MLRA season and helping himself in the Comp Cams Super Dirt Series points, where he's battling Timothy Culp for the championship. Two events remain in that series in 2019.

"We've had a good car ever since we unloaded and we broke a shock on the first lap last night," Jackson said. "We just kind of had to stay out there for points, but (tonight) we had a really fast hot rod."

Jackson set sail at the start from his front-row starting position and opened up a two-second lead over Looney. That margin was wiped out by a lap-13 caution for a spinning Reid Millard after the top two had more than a three-second gap over third-place Merrill and fourth-place Gustin.

The trend that Jackson started continued after the restart. He pulled away as the race remained green over the final 27 laps, lapping more than half the field while maneuvering through slower traffic to finish about a straightaway in front of Looney.

"Sometimes that lapped traffic helps you and sometimes it hurts you," said Jackson, who also earned a $750 bonus in the memory of Ron Jenkins, builder of the original Wheatland Raceway. "They had a really good pace tonight, so I wasn't real anxious to get by them. It was a good."

Vaught, who clinched the MLRA championship with a fourth-place run on Saturday, wound up third after starting 13th. He said it was nice to drive without worrying about points.

"Last night we missed the setup. That and being conservative don't ever go together," Vaught said. "We got a decent finish last night and the car was a lot better tonight. We changed a lot of things on the car and work hard to get it a lot faster.

"We just needed a caution there at the end. We were about a half-second faster than everybody. That would have been a good victory, but that's part of racing. We didn't qualify well."

Vaught said the first MLRA title was extra sweet after finishing as runner-up twice previously, including last year. His three children joined him atop the car in postrace festivities.

"This championship is pretty awesome," Vaught said. "We've never been a points racer and these last couple of years it's kind of fit our schedule with our kids playing sports and racing themselves. (Crew chief) Eric (Barnes) has worked really hard at the shop and a lot of this is for him.

"Just to be able to do it with my family is the biggest, most important thing to me."

Looney also enjoyed a strong bounce-back one night after an early race multicar crash left him upside and with a 24th-place finish. The crew worked late into the wee hours repairing the car.

"It was a pretty late night, but we got it patched back up," Looney said. "Fortunately it wasn't tore up too bad. The race track was pretty good tonight. Hats off to them. It's tough on track guys when you start during the day. They did what they could with what they had. Kudos to them.

"It was a really fun race. I kind of pulled up beside (Jackson) for a little bit and thought maybe we'd be able to race a little bit, but I just didn't have anything for him. So congrats to him and a good run."

Gustin finished fourth and Culp was fifth with 2018 MLRA champ Chad Simpson in sixth. Logan Martin of West Plains finished 10th, but that was enough to earn him the Sunoco Race Fuels MLRA Rookie of the Year Award.

"We enjoyed it and I can't wait until next season," Martin said.