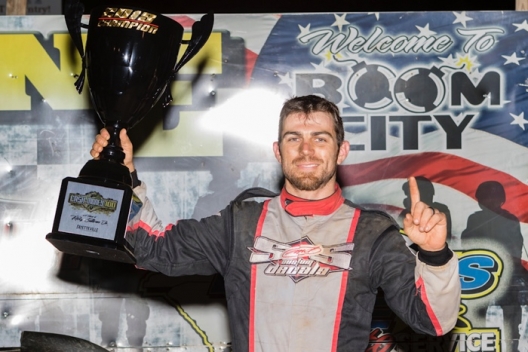 The 30-year-old driver added to his growing mastery of the 4/10-mile oval’s marquee Limited Late Model event, winning the 100-lapper for the third time in its five-year history on Saturday night.

Watkins was at a loss to explain his success in the race after capturing the $15,000 top prize with a powerful performance that saw him never relinquish the lead after passing Willie Milliken of Roanoke Rapids, N.C., for the top spot on a lap-two restart. He could only point to the hear-and-now rather than what he had done in the past to win the Cash Money 100 in 2016 and ’18 and finish second to Milliken in its ’17 edition.

“Man, I don’t know,” Watkins said, shaking his head in awe of his accomplishment. “We felt like we really got the car good and balanced today, so that really contributed to it.”

Making just his second Limited Late Model start of a 2019 campaign in which he has concentrated on Super Late Model competition, Watkins wasted little time hustling his Longhorn Race Car to the front of the pack. He shot from his sixth starting spot to second on the opening lap and then powered by Milliken for the lead after Delaware’s Kerry King Sr. brought out a caution flag on the second circuit.

Watkins didn’t make a mistake for a remainder of the distance as he kept Milliken at bay to beat the Tar Heel State driver to the finish line by 2.032 seconds. Daulton Wilson of Fayetteville, N.C., advanced from the 11th starting spot to finish third, 12th-starter Jason Fitzgerald of Middleburg, Fla., placed fourth and Shaun Harrell of Raeford, N.C., completed the top five after slipping backward from his outside pole starting position.

While Watkins has come to understand that patience is a virtue at Fayetteville, he decided that pushing the issue early in the race a bit more than he usually does at the track was a sound strategy for the century grind. He had an inkling that the track would likely lock down into one rubbered groove during the extra-distance affair so he wanted to try his best to be at the front of the pack when it happened.

“I knew we were moving a little harder than I wanted,” Watkins said. “But for some reason I just felt like I needed to go and then I could slow down.”

That’s what Watkins did, bolting to the lead quickly and then maintaining a steady-as-she-goes advantage for the final 98 laps.

“My light (signal) guy had me out (front), so I knew if I wasn’t getting pressed I needed to take care of my tire,” Watkins said. “I was just watching him, seeing how hard I needed to run. We just executed it.”

Milliken said that he initially “thought we had something for him” after losing the lead to Watkins, but the Fayetteville standout couldn’t summon the speed to pass the leader. He was able to regain second place from Wilson after running third behind his fellow North Carolinian for laps 10-24 — on a restart contact from Wilson caused Milliken to slide sideways but somehow still hang on, leading to the two drivers exchanging pleasantries under an ensuing caution — but he spent the remainder of the feature chasing Watkins.

In retrospect, Milliken felt he ran too conservatively early in the A-main.

“I over-thought it and just … I run too slow at the beginning of the race,” Milliken said. “I should’ve went on and picked my pace up and done what I needed to do.

“Ben’s a good racer. He done what he needed to do.”

Milliken’s runner-up finish, worth $8,000, came in a Mason and Lauren Price-owned Longhorn car that carried a brightly-colored scheme that resembled the last car late North Carolina racer Ricky Sullivan Jr. drove before his passing of a heart attack in 2014 at the age of 50. The Cash Money 100 honors Sullivan’s memory with its winner receiving the Ricky Sullivan Jr. Tribute Cup.

Watkins was certainly honored to hold that hardware in victory lane. As he pointed out, claiming a $15,000 first-place payoff — the richest of his career and the largest first-place prize Fayetteville promoter Jim Long Jr. has offered for the Cash Money 100, which previously paid $10,000 to win — was a big deal for him and his crew.

“We got a small team but a dedicated one,” said Watkins, whose only previous Limited Late Model start at Fayetteville this season resulted in a runner-up finish to Milliken last month. “We’re all working guys, blue-collar, and we work 40, 50, 60 hours a week and then go work on the race car and we’re away from our families.

“I can’t thank each and every one of their families, all the sponsors that helped us get here,” he added. “Man, this is just unreal.”

Several caution flags slowed the race’s pace, including a multi-car incident on lap 39 after which officials displayed a red flag so track crews could remove Michael Batten’s car from atop Dustin Mitchell’s machine.

The race was also stopped on lap 25 for a competition caution to allow teams to refuel their cars.