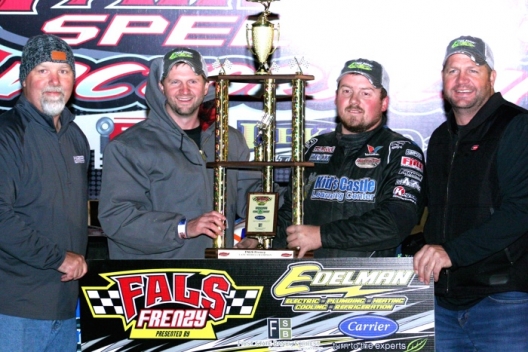 Instead, the problem ended up being the catalyst for Sheppard’s late-race rally to claim the unsanctioned event.

Sheppard, 26, of New Berlin, Ill., discovered that he didn’t need his XR1 Rocket car’s brakes as he ran down and passed Billy Moyer of Batesville, Ark., for the lead on lap 55 and then drove away to beat the Hall of Famer’s Capital Race Car by 2.242 seconds for a $15,000 paycheck. It was the second rich victory of 2019 at the quarter-mile oval for Sheppard, who on July 29 earned $30,000 for his dramatic last-lap triumph in the World of Outlaws Morton Buildings Late Model Series-sanctioned Prairie Dirt Classic driving the Rocket Chassis house car.

Shane Clanton of Zebulon, Ga., finished third in Greg Bruening’s Skyline Motorsports Capital car after grabbing the position on lap 47 from outside polesitter Shannon Babb of Moweaqua, Ill., who started swapped the lead with Moyer five times in the first 16 laps before fading during the race’s final third. FALS regular McKay Wenger of Fairbury, Ill., slipped by Babb on lap 55 to finish fourth, leaving Babb to settle for a fifth-place finish after leading laps 1-7, 10 and 13-15.

Sheppard only paced laps 55-60, but that’s all he needed to add another flourish to his spectacular 25-win 2019 campaign. It was just his second checkered flag behind the wheel of his family’s vehicle, however — and it came after the car’s brake trouble gave him a definite scare.

“It’s hard to believe there — about 35 laps to go, I lost pretty much all my brakes,” said Sheppard, who started sixth and had already reached third place when he had to deal with a major change in his car’s racing characteristics. “The last 30 laps I don’t think I touched the brake pedal, and that actually made me faster. I don’t know … maybe I learned something there.”

Indeed, without using the brakes to help guide his car around Fairbury’s banked corners, Sheppard shot by Babb for second place on lap 47 and proceeded to erase Moyer’s over 1-second edge within six circuits by powering around the outside of the track. Sheppard made his winning move by ducking underneath the soon-to-be 62-year-old Moyer entering turn three and surging ahead for good as lap 55 was scored.

“I was a little bit leery about going to the top because I couldn’t slow down any getting into the corner,” Sheppard said. “But I was just backing my corners up good enough and my car was really, really good tonight. This car was just flawless.”

Using a brand-new Ford engine built by Pro Power’s Bill Schlieper, Sheppard glided away from Moyer, whose bid to author a vintage FALS victory fell short after he led laps 8-9, 11-12 and 16-53.

Sheppard was thrilled to reach victory lane at FALS, a home-state track he’s come to adore.

“There’s no better crowd to do it in front of than the Fairbury crowd,” Sheppard said. “We’re definitely fortunate to be racing here at Fairbury in October, so I’m definitely excited, super pumped.

“The track was crazy tonight,” he added. “I think that’s the best it’s been in a long time. It was racy. Them (track-prep) guys worked their butts off on it the past two days (especially after rain washed out Friday’s scheduled $5,000-to-win preliminary show). They made a really great racetrack for us.”

Sheppard also thanked his Rocket Chassis house car owner, Mark Richards, and everyone at the Rocket shop and on Richards’s iconic No. 1 team for the blessings to “allow me to come out here and do this deal” with his family equipment on an off-WoO weekend.

What’s more, the victory certainly provided a nice pick-me-up to Sheppard, who has been in the midst of what can almost be called a slump according to the lofty standards he’s set. He failed to win a feature in September — his first winless month since January when he didn’t reach victory lane in six starts during the Keyser Manufacturing Wild West Shootout at Arizona Speedway — and he entered Fairbury’s program having gone 13 races without a triumph since his last win in an Aug. 30 WoO A-main at Sharon Speedway in Hartford, Ohio.

“I’m sure Mark (Richards) is gonna be happy that I got my mojo back here,” Sheppard said a smile. “I’ve been on a little bit of a drought, haven’t won in like eight or nine races (actually 13), which seems like not very many, but the way our year’s been going … we’ve had a good enough car every night (since Aug. 30), it’s just things haven’t worked out for us and luckily tonight we were able to get it done.”

The feature’s lone caution flag flew on lap 41 when Brian Shirley of Chatham, Ill., slowed after getting into the backstretch wall.