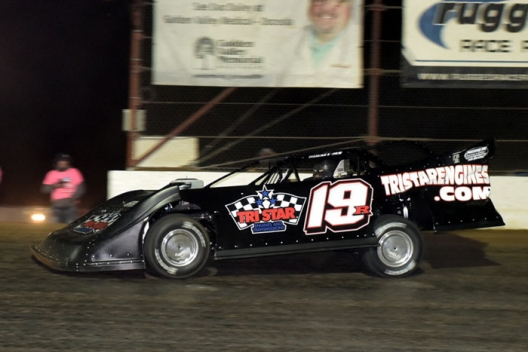 WHEATLAND, Mo. (Oct. 12) - As Ryan Gustin sat idle in the midst of a nine-car pileup that resulted in a lap-one red flag, little did he dream a trip to victory lane awaited.

But Gustin, driving a new Tri-Star Engines-backed Dirt Late Model after spending much of his year campaigning his Modified, achieved just that Saturday night. He took the lead just past the mid-point and went on to claim the 50-lap Lucas Oil Midwest LateModel Association Fall Nationals opening-night feature win at Lucas Oil Speedway.

Gustin, 28, of Marshalltown, Iowa, earned $5,000 — plus an additional $750 bonus on behalf of the family of Ron Jenkins, the original builder of the Wheatland Raceway — for his first MLRA victory since 2015. He outlasted runner-up Tyler Bruening of Decorah, Iowa, third-place Chad Simpson of Mt. Vernon, Iowa, and MLRA points leader Will Vaught of Crane, Mo., in a program that was co-sanctioned by the Comp Camps Super Dirt Series and attracted 38 entries.

"This Rocket (XR-1) was just on a rail," the 10th-starting Gustin said in victory lane, praising his crew for getting it prepared.

Saturday’s feature got off to a rocky start. Mitch McGrath spun to bring out a yellow in turn two in the first attempt to get going. Then nine cars were involved in a turn-three melee, bringing out the red flag before one lap could be completed. Fourth-starting Payton Looney of Republic, Mo., took the worst of it, winding up on his top as he had nowhere to go as spinning cars blocked the track in front of him.

Looney was not injured and his recently-new car did not suffer major damage but still enough to end his night. Among the others involved were Terry Phillips, Logan Martin, Scott Crigler, Hunter Rasdon, Joseph Gorby, Jason Papich, Timothy Culp ... and Gustin.

Fortunately for Gustin — and most of the others — there was little if any damage to their cars.

The third attempt to start worked as the polesitting Bruening wasted no time jumping out to the lead, opening a 2.5-second gap over Brian Rickman of Columbus, Miss., when the caution flew on lap eight.

After that early flurry of stoppage, the race remained green for the final 40 laps. Gustin gave close chase to Bruening until finally making the decisive pass on the high side, going around Bruening for the lead coming out of turn four to complete lap 29.

Gustin worked through lapped traffic and pulled away from there, finishing 1.474 seconds in front of Bruening. Simpson finished third with Vaught fourth and Rickman fifth.

“It feels good, man,” Gustin said of winning again in a Late Model after picking up six United States Modified Touring Series wins in 2019. “Never in my wildest dreams did I imagine we'd come back and win like that. But this XR1 is on a rail and it don't get no better.”

Bruening had the fastest lap in time trials for both Group A and B, at 16.740 seconds, then won his heat race to nail down the pole position starting spot for the feature. It was the Iowa driver's first trip to Lucas Oil Speedway.

"The car was phenomenal all night," said Bruening, who earned his second MLRA runner-up finish in four starts this season. "This is the first time we’ve ever been here and I’d say we have a pretty good hot rod for tomorrow night. We’ll learn from tonight, make a few adjustments and be better tomorrow.

“For the first time being here at Lucas Oil Speedway, it’s phenomenal. I love it.”

Simpson, who celebrated the Lucas Oil MLRA championship with a Fall Nationals feature win one year ago, said he was pleased with his run.

“Hats off to Ryan. He had a good race car and Tyler, too,” Simpson said. “We were all right, but we weren’t good enough to run up front and battle with those guys for the lead. We have to get a little tighter.”

Vaught solidified his hold on the MLRA points lead. He entered the night 89 points in front of McGrath and wound up three spots in front of him to put him closer to his first MLRA crown.

In the Comp Camps title chase, Prattsville, Ark.’s Culp finished eighth, which was 10 spots in front of second-place points man Jackson. The Comp Camps Series still has two races remaining after this weekend.