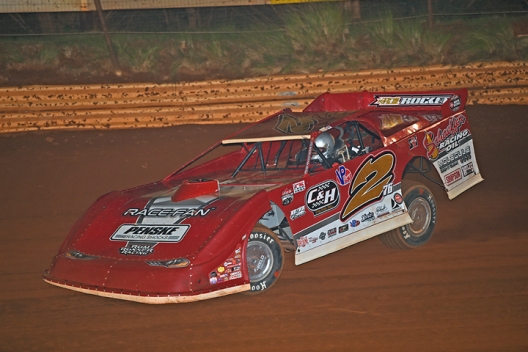 Charging to the lead at the drop of the green flag, the Evans, Ga., driver led the entire distance, holding off a hard-charging Kyle Hardy of Stephens City, Va., in late-race lapped traffic to score his third victory in as many starts.

“I hurt them tires at the beginning and I was really just hanging on,” Overton said after the race. “Lucky enough, our car’s been good lately. … We didn’t get rolling like we should have (at the beginning of the year). I’d rather it be this way than start off hot and fall off at the end. Just hard work. Everybody does their job and I feel like we’ve got one of the best teams in the country.”

Starting outside the front row, Overton dominated the first half of the distance, setting the pace over fourth-starting Dale McDowell of Chickamauga, Ga. As the race leaders entered heavy lapped traffic at the halfway mark, second-running Hardy charged the high side, challenging Overton at the front of the field.

But a caution would slow Hardy’s momentum and give Overton an open racetrack. The frontrunners entered lapped traffic again on lap 37, allowing Hardy to reel in the race leader. But his last-lap challenge came up short, with Overton taking the checked flag by 0.669 seconds.

“The racetrack moved around a little bit,” Overton said. “Right there when I was running that bottom, my car was too tight to get down there and I chunked my right-rear tire. When I moved to the top, I was alright. I just didn’t have no tire. But we held on to get it.”

Rolling off third in the feature, Hardy rolled the high side to overtake second-running McDowell early on. Despite making contact with the lapped car of Ross Bailes of Clover, S.C., late-race, he was able to challenge Overton for the lead.

“We got rolling really good there in the feature,” Hardy said. “I was half-throttle to keep from getting into him when I got some runs built up. Just didn’t need that yellow. We needed it to stay green. I had some good momentum built up.”

After starting outside the second row and running as high as second, McDowell said he was pleased with his podium finish. He led laps in last year’s Tar Hill 50 before a flat tire knocked him from contention.

“Early, I thought we was going to be okay,” McDowell said. “We was working middle-bottom there and was able to race Brandon pretty hard. I knew when we got in that lapped traffic it was going to get interesting. Then the top come in and we were passed on the top. There really wasn’t a lot of bottom left at that point in time, so it was all about lapped traffic. But it’s all about choosing the right line and getting things to go your way. We’re proud with top three.”