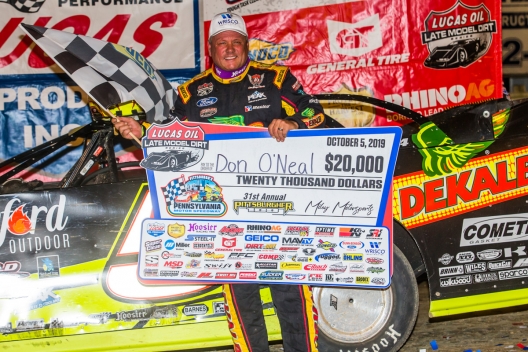 But considering the way the 2019 season has gone for the 55-year-old veteran from Martinsville, Ind., he figured that he was overdue to have something finally go his way.

So after O’Neal inherited the lead during a lap-93 caution period when race-long pacesetter Jonathan Davenport of Blairsville, Ga., ran out of fuel and then controlled the remainder of the distance to claim the race’s $20,000 top prize for the second time in his career, he was understandably ecstatic. The triumph was not only his first of ’19 on the Lucas Oil Late Model Dirt Series but his first of any kind in an injury-shortened campaign that saw him miss two months of action following knee surgery.

“Man, I’m just so glad to win this race,” said O’Neal, who was sidelined from his seat in the Clint Bowyer Racing XR1 Rocket No. 5 after a mid-June pit-area mishap tore ligaments in his left knee. “I just needed to win one so bad. I’m pumped.”

O’Neal, who previously won the Pittsburgher 100 in 2017, survived a one-lap dash to the checkered after a caution flew on lap 99 to beat the Black Diamond house car piloted by 23rd-starter Earl Pearson Jr., 47, of Jacksonville, Fla., to the finish line by 0.644 of a second.

Tim McCreadie of Watertown, N.Y., finished third in the Sweeteners Plus-backed Longhorn house car — but just barely. The 45-year-old rallied after pitting multiple times during the race’s first half — including on lap six when a cut left-rear tire caused him to slow while running seventh — and nearly relinquished a podium placing to a blown right-rear just yards before the finish line.

Jimmy Owens of Newport, Tenn., also salvaged a top-five finish with his Ramirez Motorsports XR1 Rocket car after twice experiencing trouble as he appeared to be mounting a serious bid for his first-ever Pittsburgher 100 trophy. He was battling for second with the winner’s 19-year-old son, Hudson O’Neal of Martinsville, Ind., on lap 48 when they tangled and spun together in turn four, and, after climbing back to third from the rear of the field, he clipped turn four’s inside guardrail on lap 79, bent his machine’s nosepiece and immediately fell back to fifth before regaining his rhythm to place fourth.

Gregg Satterlee of Indiana, Pa., completed the top five in his father Gary’s XR1 Rocket. He advanced as far as third place midway through the race from the seventh starting spot before spending much of the feature’s second half running just outside the top five.

Davenport settled for a ninth-place finish after leading laps 1-93 — often by a healthy margin during the race’s first half — and keeping O’Neal at bay late in the distance until his Lance Landers-owned Longhorn car’s fuel tank ran dry. He pulled up lame on the backstretch after a caution flag flew for O’Neal’s CBR teammate Josh Richards of Shinnston, W.Va., who slowed with a flat right-rear tire while running third and closing on the leaders, and was pushed to the pit area where his crew added gas and refired the car.

“I seen him coming down the back straightaway just pull over and stop,” O’Neal said of Davenport. “I didn’t know what was wrong with him, but I was like, ‘I’ll take it.’”

Davenport’s demise certainly made O’Neal worry about the amount of fuel remaining in his own tank, but a closer examination following the race revealed he had no reason to stress.

“(Fuel is a concern) always every year you come here,” O’Neal said, noting that PPMS’s sprawling half-mile layout and high speeds bring fuel into the mix as a factor. “But I had seven gallons of gas left so I was really good shape.”

Whether O’Neal would have been able to find a way past Davenport over the race’s final seven circuits is a question he fortunately wouldn’t have to answer, but he thought he at least had a chance. While Davenport dominated the action through the A-main’s halfway point — he built an edge that stretched as large as nearly a straightaway over the second-place battle that featured the O’Neals and, briefly, Hudson O’Neal and Owens — but didn’t open quite as much distance on the elder O’Neal after the race was red-flagged on lap 63 when Stormy Scott of Las Cruces, N.M., hit the turn-four wall.

O’Neal momentarily nosed underneath Davenport in turns one and two following restarts on laps 48, 62 and 63, but he didn’t force the issue at that point.

“I could’ve squeezed him a little harder down there in one and two and maybe made him think about it a little bit,” O’Neal said, “but I didn’t want to wreck us both.”

O’Neal stayed within striking distance of the leader during the long green-flag stretch between laps 63 and 93.

“I finally started finding that bottom (of turns one and two), but I had to be so patient and wait, wait, wait, because if I got on the gas too early I’d shove out a little bit,” O’Neal said. “That’s where I started making some gains.

“Actually I got pretty good on the other end (of the track) too, but if I got close to (Davenport) he’d change his line and I’d lose the air (on his car’s nose). The car would just take off on me and get real loose or shove. You lose air on the car and you lose five, six, seven car lengths on him, and then you have to try and make it back up.

“One time down there (turns one and two) I run through the middle toward the lower part of the racetrack and got beside him,” he added. “Then I come down here and lost the nose. I just had to get back there to him. I think if I was patient enough, I was a lot better getting off four than he was.”

Davenport’s empty fuel tank made things much easier on O’Neal, but he wasn’t about to apologize for the circumstances of his long-awaited victory. He was just relieved that his perseverance during a frustrating season had finally paid off.

“I want to thank my guys,” O’Neal said, crediting his crewmen Brian Leonberg and Chris Jayco. “I want to thank the 14 team (of Richards) too. Josh has really helped me and worked with me. He’s part of the reason why I won this race.”

Pearson, meanwhile, materialized as a contender so unexpectedly due to late-race circumstances — and was in such dire need of a strong finish to right a frustrating slump — that he wasn’t about to try any rash, go-for-it-all move to pass O’Neal on the lap-99 restart. He was more than satisfied with a $10,000 runner-up finish in a new Black Diamond car he debuted the previous night at Raceway 7 in Conneaut, Ohio.

“I hear some of the guys run out of fuel, and some guys wrecked, which all that was benefitting us, there’s no doubt,” said Pearson, whose only Lucas Oil Series victory this season came on Feb. 2 at Golden Isles Speedway near Brunswick, Ga. “On them restarts we was pretty good. We were able to get by Jimmy (Owens) and McCreadie on that (lap-93) restart there and come second, but we didn’t have anything for Don or Davenport.

“We’ve been struggling the last two months, so we’re proud of this.”

McCreadie also was happy to salvage a $6,000 third-place finish after all he went through during the century grind.

“I don’t know what happened early, whether the body rubbed on it or what cut it down,” McCreadie of his lap-six flat tire. “But we battled. The guys did a great job. We pitted a bunch of times to try and make the car more balanced (including making a right-rear tire change) and it got better. We got it manageable to where I could get up through there. I just couldn’t get it parked the right way to do what I wanted to do.”

McCreadie did find himself sitting in second place behind O’Neal after Davenport’s lap-93 misfortune, but he didn’t have the speed to challenge for the win nor remain in the runner-up slot.

“I thought we were gonna have some luck,” said McCreadie, whose best finish in five previous Pittsburgher 100 starts was sixth, in 2017 and ’18. “I thought I could get in there and park it in the infield, and it was just so rough down there and tacky that I couldn’t squirt and then Earl got me (for second).”

Eight caution flags dotted the feature, including a lap-26 slowdown for Scott Bloomquist of Mooresburg, Tenn., who was stricken with a flat left-rear tire after marching from 20th into the top 10 (he pitted again later and finished eighth) and the final yellow on lap 99 when Johnny Scott of Las Cruces, N.M., stopped in turn four because his car was out of fuel.

Scott’s twin brother Stormy escaped the lap-63 red-flag incident with only a sore left hand, but his car appeared in need of a new front clip after his hard impact with the turn-four wall. Stormy was running fourth — Owens had just taken third from him — when he clipped the inside guardrail in turn four, folding his car’s nosepiece under and sending him straight across the track.

The 10-minute horn to line up the feature was blown by Lucas Oil Series officials at 8:45 p.m. … Polesitter Shanon Buckingham is among seven first-time Pittsburgher 100 starters in the feature field, joining Stormy and Johnny Scott, Billy Moyer Jr., Ryan Montgomery — who is also making his first-ever Lucas Oil Series appearance — Tyler Erb and Bryan Bernheisel. … Former Pittsburgher 100 winners in the A-main lineup are Don O’Neal, Josh Richards, Gregg Satterlee, Chub Frank and Scott Bloomquist, who missed his heat race due to a broken rearend during time trials but recovered after repairs to transfer through the second B-main. … Mason Zeigler’s night ended due to mechanical trouble during his heat race while Dylan Yoder experienced problems during time trials that ended his evening.