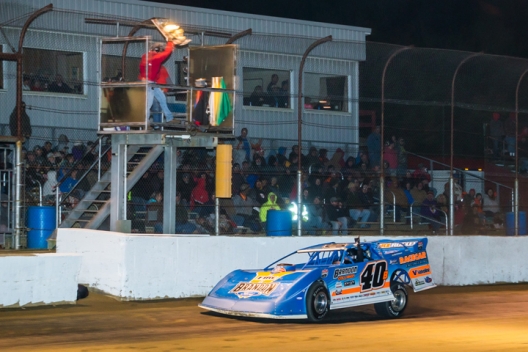 Winning his heat race to start on the outside pole of Friday’s 50-lap feature, Bronson led the first nine laps before falling to Owens, who quickly stretched his lead to more than a four-second advantage. Running second, Bronson assumed the point when Owens retired on lap 46, going on to capture his third career Lucas Oil Series victory.

“This things are tough to win,” Bronson said. “I feel terrible for Jimmy because he definitely had the car, class of the field. He was gone, in a different zip code. Jimmy’s been helping me a lot with a lot of these different racetracks these last few weeks, teaching me how to drive and stuff like that. Just being around that guy is helping me a ton. Terrible luck for them guys, but I’ll take these wins however I can get it.”

It was just after the five-to-go signal had been shown that Owens fell off the pace, slowing his No. 20 machine after holding a commanding lead in heavy lapped traffic. Bronson charged to the front of the field on the ensuing restart, leading the final five laps and finishing 1.548 seconds ahead of fifth-starting Tim McCreadie of Watertown, N.Y., at the checkered flag.

“I don’t know if he broke an axle or something like that,” Bronson said of Owens’s demise. “His car got really out of wack there for a couple of laps. I think he broke an axle … I’m not really sure. But I’ll take it whatever way I can get it. Terrible luck for them guys and I feel sorry. But hopefully I can go win another one tomorrow.”

Unable to seriously challenge Bronson in the final laps, McCreadie finished a comfortable second. With his runner-up finish he continues to sit second in the Lucas Oil Series standings with a 60-point advantage over Richards.

“Once it got a little clean in the middle, we just couldn’t maneuver no more,” McCreadie said. “I really thought once the track got all the dirt off it it would get a lot better. It was probably the smoothest track we’ve been on in a month and a half, so that’s pretty nice. We’ve got a car in one piece to go tomorrow.”

After a tight battle with McCreadie and Davenport through the middle stages of the race, Richards was happy to close the night with a podium finish.

“I thought we were going to be better than we were,” Richards said. “I was just way too loose to start the race. We had a third or fourth-place car. Those guys did a great job. … Towards the middle of the race, I felt like the car got better once the right-rear got a little bit of heat in it. We was actually gaining on McCreadie, but not enough to pass him or anything. We just need to be just a tick better. We missed it a little bit tonight.”

Notes: Bronson scored his second Lucas Oil Series victory of the season, his first coming on June 13 at Fayetteville (N.C.) Motor Speedway. … The race was slowed by two cautions. … Don O’Neal lowered the previous track record in time trials, tripping the clock with a time of 17.054 seconds. … The Lucas Oil Series made its first-ever visit to Raceway 7. … The Great Lakes 50 kicked off the tour’s doubleheader weekend. … The series heads 135 miles south to Imperial, Pa., for the 31st annual Pittsburgher 100 at PPMS on Saturday.