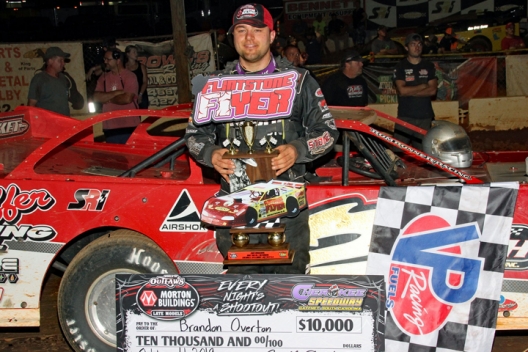 The polesitting Evans, Ga., driver had to shift gears on Friday at Cherokee, learning how to use a little patience up front in racing to a $10,000 World of Outlaws Morton Buildings Late Model Series victory in the inaugural Mike Duvall Memorial.

The 28-year-old Overton survived an early challenge from Chris Madden and led the rest of the 50-lap national touring feature that honored the late Hall of Fame driver who famously piloted the Flintstone Flyer.

"It's way harder to win ’em like that, trying to be patient, than it is to go all out. Usually I'm running around this place at the top," the Rum Runner Racing driver said. "The last couple of times we've been over here, we've gotten beat on the bottom (with) a little different tire. So we changed our car up a little bit tonight, and man, it was really good. I know I was out front, but our car was really maneuverable, it ran really good. ... everything went our way."

Overton collected his third WoO victory of the season, taking the checkers 1.601 seconds ahead of Madden, the Gray Court, S.C., driver who had won the previous night's WoO feature at Lavonia (Ga.) Speedway. Chase Junghans of Manhattan, Kan., was third with series points leader Brandon Sheppard of New Berlin, Ill., and Darrell Lanigan of Union, Ky., rounding out the top five.

Overton cruised most of the race, but things were tense early in the race when the frontrunners first approached traffic. As Overton tried to work around the slower car of Blake Spencer, Madden pulled alongside and Junghans stuck his nose into contention for a three-way battle for the lead on the ninth lap.

Madden nosed ahead briefly, but when a lap-nine caution appeared, it reset the field and Overton never faced such a serious challenge again.

“I got into lapped traffic one time and was able to capitalize on it, made the pass on Overton and then the caution came out and had to go back," Madden said. "He made a mistake that one time and then didn’t make it again."

Overton, who never officially lost the lead, said he wasn't too worried. “My car was right and doing its thing, it felt good. So, I wasn’t panicking," said Overton, whose previous 2019 WoO victories came at Screven Motor Speedway in Sylvania, Ga., and Cochran (Ga.) Motor Speedway.

Overton celebrated in victory lane at Cherokee with a trophy depicting the Flintstone Flyer car of Duvall, the late driver who was South Carolina's lone World 100 winner and a frequent victor at Cherokee during a long career.

"I know how much Mike meant to a lot of people around here — hell, to all of us — he was a racer," Overton said. "It's kind of neat, Bobby Kay was with me last night, and you know, Mike drove for Bobby back in the day, so I've heard many stories about him and I know how much he means to all ya'll, so it's an honor to win it."

Madden echoed Overton's thoughts on Duvall, whose family members were part of a big weekend at Cherokee scheduled to continue Saturday with a $5,000-to-win event for Crate Late Models.

"We spent a lot of time with Mike there at the end of his racing career," Madden said. "It was a special race for them and congratulations to Brandon and (winning crew chief) Harold (Holly) and those guys on their win. Those guys work hard too. We worked hard. We just came up one spot short tonight."

With his third-place finish, Junghans moved into the second spot behind Sheppard in series points. The move was aided by the misfortune of Shane Clanton, who wasn't able to complete a lap.

"It's unfortunate for (Clanton) to have that failure, but we'll take his bad luck and turn it into good luck for us," Junghans said. "Hopefully we can just finish out the year strong. There's still three more races left. A lot can happen, so we've just gotta be on our A-game."

The feature was slowed by six cautions, none for serious incidents. G.R. Smith slowed on the 12th lap, Zack Mitchell parked on lap 15 and Madden's teammate Scott Bloomquist retired at halfway. Chris Ferguson drew a lap-42 caution while running fifth and the final caution appeared for Boom Briggs on lap 47.

Notes: Shane Clanton, who entered the race second in WoO points, was scheduled to start fourth but mechanical woes forced him to scratch. ... Sixth-finishing Derrick Ramey of Mooresville, N.C., who started 17th, posted a sixth-place finish in his first career WoO start ... Corey Richmond, the crew chief for third-place finisher Chase Junghans is back home in Kansas battling mononucleosis. ... The event drew a capacity crowd.