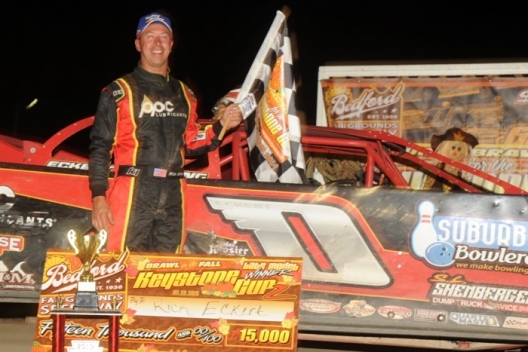 With Eckert — unlike some of his rivals — not convinced that the feature would be shortened by the approaching rain which led Bedford promoter Joe Padula to hastily put the Super Late Model feature on the track without any introductory fanfare, he stuck with his plan to utilize hard-compound rubber and it paid off with a dominating performance.

The 53-year-old veteran from York, Pa., came on during the race’s second half, exploding past Scott Bloomquist of Mooresburg, Tenn., for second place on lap 34 and doing the same to race-long pacesetter Gregg Satterlee of Indiana, Pa., to grab the lead on lap 36. Eckert never looked back en route to claiming the $15,000 top prize by a monstrous margin of 15.687 seconds — more than half of a lap on the sprawling half-mile fairgrounds oval — over Satterlee.

“I stayed with harder tires because they kept saying the rain wouldn’t get here till 9, 9:30, and it was (a bit past) 7:30 when we were starting (the A-main),” said Eckert, who did not compete in last year’s inaugural Keystone Cup. “I knew it was lightning and stuff (beyond the backstretch throughout the feature) so (the precipitation) looked close, but on the radar it didn’t look that close.”

While the 35-year-old Satterlee was hampered more during the race’s second half by his car’s damaged spoiler than his tire choice (like Eckert, he ran harder-compound rubber), Bloomquist had his hopes dulled after advancing from 21st to second in 29 laps by his decision to bolt on softer tires in hopes that he could hustle to the front before rain arrived to cut short the feature. Bloomquist couldn’t keep pace down the stretch and settled for a third-place finish, just a half car length in front of 13th-starter Dylan Yoder of Selinsgrove, Pa., who came on strong to place fourth.

Fourth-starter Matt Cosner of Ridgeley, W.Va., completed the top five after running third for the headliner’s first 12 laps but then hanging on the rest of the way due to his deteriorating softer tires.

What happened with the rain that was, in some way, on everyone’s mind before they hit the track? It began to spit just as Eckert pulled into victory lane and shortly thereafter turned into an thunderstorm deluge, sending teams scurrying to load up their trailers and forcing officials to postpone the remaining Late Model Sportsman and open-wheel modified features to late Sunday afternoon.

Racing at a track where he won four consecutive track titles from 1989-92, the third-starting Eckert settled into fourth place with his self-owned XR1 Rocket car during the feature’s early circuits. He overtook Cosner for third on a lap-12 restart and passed polesitter Ross Bailes of Clover, S.C. — another driver who anticipated a rain-shortened A-main and thus faded as his soft tires wore out — for second on lap 19, but his first attempt to grab the lead from Satterlee was stifled when he ran out of room behind Satterlee on the homestretch and grazed the outside wall.

After a pair of caution flags on lap 29 — the first coming when 14-year-old Drake Troutman of Hyndman, Pa., slammed the tire barrier in front of the turn-three wall due to contact from Satterlee as he was lapping the teenager — Eckert briefly lost second place to Bloomquist. He knew, however, that he still had the speed to deal with the 55-year-old Hall of Famer as well as Satterlee.

“On that last restart (on lap 29), when Scott was beside me, I’m sure he was soft on tires so he beat me (to take second),” Eckert recalled. “I was like, ‘Well, OK, I’m not gonna panic.’ Then he got to racing Gregg (for the lead), and that let them both get worse, and I could get a big run off of four.

“I had a really good line through (turns) three and four and made some speed. (Bloomquist) got to racing Gregg and slowed ‘em both up, and he slipped off four just as I had a big run so I crossed him over (to the bottom) down the front straightaway (to snatch second on lap 34). I think the next lap I crossed Gregg over the same way (going into turn one) and got the lead.”

And that, basically, was the race. Eckert glided away from Satterlee and Bloomquist, racing in a league of his own for the remaining distance. His march to victory was essentially a matter of managing his huge advantage.

“He (his crewman Bob Miller) told me I had a big lead, so the last 15 laps, after I cleared the 06 car (Mike Lupfer) and there was a big gap, I was like, ‘OK, I’ll just ride here,’” Eckert said. “Well, I was riding, and I caught a bunch of guys with like five to go and I’m looking and (Miller’s) telling me I got a big lead and they were having a dog fight for position in front of me, about six of ‘em, so I was like, ‘I’ll just ride here. If I have to go at the end, I’ll go. But if I don’t have to, I won’t.’

Eckert flashed under the checkered flag on the 60th lap while Satterlee was still working his way along the backstretch. He left 12 drivers on the lead lap in a race that represented Eckert’s ninth overall victory of the 2019 season, his first spent racing regionally rather than chasing a national tour in over two decades.

“It’s awesome,” Eckert said when asked about the significance of earning $15,000 so close to home. “My (travel) expenses are way down. I fill the truck up (with fuel) about once a month now instead of three or four times a weekend.”

The triumph was also Eckert’s second at Bedford this season. On Aug. 30 he captured the Labor Day 55, his first win at his old home track in 25 years.

“Winning at Bedford is great,” Eckert said. “Winning that last one was really great. I came here and won the championship for four years in a year and was really good here. I didn’t come back for about 10 years, but I’ve been back about a dozen times since then and didn’t run worth a s—, so to win last time I was here was a relief. Most people here probably don’t even know I ever won here, so to do it again feels good.”

Satterlee, who led laps 1-35 off the outside pole, felt quite fortunate to salvage a runner-up finish after his lap-29 scrape with Troutman left the right portion of his XR1 Rocket car’s spoiler flapping in the breeze along with other right-rear bodywork damage. There was no doubt Satterlee was at an aerodynamic disadvantage.

“It was just loose. Half my spoiler was gone,” said Satterlee, who earned $6,000. “We had harder (tires) than some of the other guys. We were good I think. Eckert passed me and drove away, but half a spoiler makes a pretty big difference at these big places.”

Bloomquist, meanwhile, rebounded well after engine trouble during Friday’s time trials forced him to sit out his qualifying feature and transfer through a Saturday B-main with another powerplant in his self-built car.

A winner of a 2011 Lucas Oil Late Model Dirt Series feature at Bedford, Bloomquist appeared primed to bid for Keystone Cup glory after reaching second place. He was unable to mount a serious challenge, however.

“The track blacked up,” Bloomquist said, describing his ultimate downfall.”We ran soft tires … we just didn’t know, and there was rain around. That (soft tires) got us there (to second from 21st), but they really started giving up. The right-front gave up first.

“Rick (Eckert) obviously had something hard on because he could just push it hard. I could see he was trying to pass Satterlee when I was behind him. I was catching him, and then all of a sudden I was just holding my own. Then, with the caution (on lap 29), I thought, Maybe I can fire off the caution, and I did at first, but I’d say the left-rear and right-front (tires) are shot.”

Added Bloomquist, “It (the weekend) turned out fine for how it started.”

Bailes, who on Friday set fast time and won a qualifying feature and the dash to earn the pole position for Saturday’s 60-lapper, ran second for the race’s first 18 circuits before starting to fade. He pitted during a lap-29 caution period to changes tires on his Barry Wright Race Cars house car and finished 11th.

“We just made the wrong tire call,” said Bailes, who made his first-ever appearance at Bedford. “We were expecting it to rain early (and shorten the race). We gambled and it didn’t work.”

Six caution flags slowed the feature. The first came on lap nine when Jayme Beck ended up stopped against the turn-one wall after Satterlee made contact on the homestretch while lapping her. Subsequent cautions flew for John Weaver slapping the turn-four wall on lap 10; Kyle Lear spinning in turn four on lap 12; Matt Sponaugle stopping in turn two on lap 17; Troutman’s accident on lap 29;and a Sponaugle/Lear tangle in turn four on the lap-29 restart.

Ross Robinson of Georgetown, Del., won Saturday’s B-main after a frustrating Friday that saw him hit the wall in turns one and two during time trials and his qualifying feature, but he scratched from the Keystone Cup due to terminal engine trouble that he discovered after transferring to the main event.

Making his first career start at a track in Pennsylvania, Bailes was flawless behind the wheel of the Barry Wright house car. He led all the way in both his qualifying feature and the 6-lap Pole Dash, beating Rick Eckert of York, Pa., to the finish line by 0.676 of a second in the former and outdistancing Gregg Satterlee of Indiana, Pa., by 1.470 seconds in the latter.

The sweep of Friday's action was worth $900 to Bailes, whose $500 qualifying feature payoff was topped off by the $200 DirtonDirt.com Fast Time Award and the $200 Troy Swindell Trucking Pole Award.

Satterlee will share the front row of Saturday's 60-lapper with Bailes after finishing second in the Pole Dash, which pitted the top-three finishers from each qualifying feature in a race for starting positions. Eckert finished third in the dash, followed by Matt Cosner of Ridgeley, W.Va., who scored a flag-to-flag win in the second 16-lap qualifying feature, Jason Covert of York Haven, Pa., and Tyler Bare of Rockbridge Baths, Va.