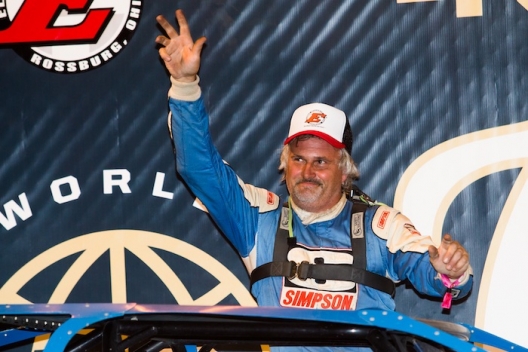 After taking the lead on the third circuit, a lap-11 collision with a lapped car knocked Henry, a former Eldora track champion, out of contention. Grabbing the lead on the restart, Erb cruised to the Big E’s victory lane, finishing 1.719 seconds ahead of runner-up Chris Madden of Gray Court, S.C., at the checkered flag.

“The car was a little lazy on the restarts there,” Erb said after the race. “But once we got rolling I knew the car was feeling pretty good. We had a little help there, but we were able to get back out there and jump up front and held on.”

It was outside polesitter Hudson O’Neal of Martinsville, Ind., charging to the front of the field at the drop of the green flag, falling to Henry just two laps later when the fourth-place starter shot ahead down the backstretch. Five laps in, Henry had stretched his lead to a 1.306-second advantage over second-running O’Neal.

As the race leader approached the rear of the field on lap 11, disaster struck. Preparing to slip past the lapped car of Kody Evans of Camden, Ohio, on the low side, the pair made contact, sending both cars into the outside retaining wall in turns three and four. Henry limped his damaged car back to the pit area.

Suffering right-rear quarter panel damage in the incident, O’Neal was able continue on, bringing the field to green on the restart. But the yellow flag would wave once again when the 19-year-old driver cracked the wall in turns one and two, bring his No. 71 pitside.

Erb assumed the point, stretching his lead late-race as a tight battle for second ensued behind him. The 2016 Dream winner notched his third victory of the 2019 season, his first since scoring a weekly triumph at Fairbury (Ill.) Speedway on June 29.

“The top was pretty dominant,” Erb, who chose to restart from the outside lane, said. “I always try for that bottom. I tried for a little bit but it wasn’t working so I had to get up onto the top. We had a good car.”

Charging from the 14th starting spot and overtaking Jason Jameson of Lawrenceburg, Ind., late-race, Madden finished runner-up, with Jameson settling for third. Shanon Buckingham of Morristown, Tenn., ran fourth with Ricky Weiss of Headingley, Manitoba, advancing from the 12th starting spot to round out the top five.

Madden, Jameson and Buckingham raced three-wide for second through the final laps, with the Scott Bloomquist Racing pilot holding the advantage at the checkered flag.

“We definitely have a long-lap running race car,” Madden said. “All of our races we’ve won here the last month, we started mid-pack or so and that kind of showed tonight. Twenty-five laps is just not long enough. But man, we’ve got an awesome hot rod for tomorrow.”

After getting a good lap-11 restart and losing position when the race went green for the second time, Jameson charged around the high side late-race, swapping position with Madden and Buckingham. After a disappointing Thursday performance, he was happy with his podium finish.

“Tonight we had a good car,” Jameson said. “It sucks being that close. I think I could have got it done. I got behind (Shanon) Buckingham too long, we had a hell of a race going on. I’ll take that after last night. Hopefully it will help us out tomorrow for a good starting position.”

Polesitter Chris Simpson took an early lead, as a four-car battle ensued for second in the opening laps. Running the high side, second-starting Ashton Winger got into the wall in turns one and two to draw a caution on lap five. Another yellow flag waved on the restart when Zak Blackwood made hard contact with the wall in turns one and two. Simpson held his lead as race race went back green, as he and second-running Earl Pearson Jr. began pulling away from the rest of the field. Fourth-running Mike Marlar slowed with a flat tire to draw a caution on lap eight. Simpson won the heat, with Pearson holding off Kent Robinson to take the second and final transfer spot.

Pulling ahead of fellow front-row starter Rusty Schlenk out of turn two, polesitter Josh Richards took an early lead. It was a three-car battle for second on the third lap, with Schlenk holding the advantage over Jimmy Owens and Gregg Satterlee. Owens slid ahead out of turn four to overtake Schlenk on the fifth lap, with Richards continuing to show the way out front. As the laps clicked off, Owens began reeling in the race leader, with Satterlee running a close third. Richards won the consolation, with Satterlee overtaking Owens on the final lap to run second and transfer to the feature.

With a victory in the first heat, Michael Norris rebounded nicely from an opening-lap heat incident on Thursday that forced him to replace his car’s nosepiece and bumper. He also went very fast on a track that still had plenty of traction in it. “That was a pretty elbows up heat race,” he said. “I didn’t do much lifting of the gas.” … Hot off his first career Eldora win on Thursday, 19-year-old Hudson O’Neal took advantage of his pole starting spot to win the second heat and set himself up for another $10,000 victory. “This thing is a dream to driver right now,” he said of his Todd Burns-owned Longhorn. “We’re starting up front (in the feature), so we put ourselves in an excellent position again.” … After barely missing the spinning car driven by 80-year-old Vern LeFevers midway through the third heat, Jonathan Henry went on to win the prelim in just his fourth start of 2019 in a Heckenast Racing car backed by sponsor Jim Weber. “I’m just racing to prove to everybody that I can win and I can get up on the wheel,” Henry said. … After registering a fifth-place finish in a Thursday feature, Dennis Erb Jr. said changes he made to his mount made it feel better in his Heat 4 victory. He’s never won a World 100 preliminary feature, but he captured Dream prelims in 2015 and ’16.

Polesitter Dennis Erb Jr. shot to the lead at the drop of the green flag, as fifth starting Tyler Erb powered past Billy Moyer Jr. to take second on the second circuit. Sixth-starting Ricky Weiss was also on the move early, running in third with two laps complete. D. Erb stretched his lead to nearly a full straightaway at the half way mark, as T. Erb and Weiss battled door-to-door for second. Holding more than a 3-second advantage, D. Erb on the heat, with T. Erb running second and Weiss finishing third. Don O’Neal and Moyer Jr. transferred to the feature.

Outside polesitter Jonathan Henry slid ahead of fellow front-row starter Kody Evans in turns three and four to take an early lead. It was a close battle for third in the opening laps, with Chris Simpson and Shanon Buckingham racing side-by-side for position. A yellow flag waved on lap six when Vern LeFevers spun in turn four, narrowly avoiding contact with the race leader.  Mike Marlar used the restart to his advantage, powering around the top side to advance from sixth to fourth in one lap. Dalton Polston slowed off the pace to draw a caution on the seventh circuit. Just as Buckingham was set to challenge Henry for the lead on the restart, Marlar and Ashton Winger made contact in turn four to draw another caution. Henry held on to win the heat, with Buckingham and Michael Page rounding out the podium.

Polesitter Hudson O’Neal shot to the front of the field at the drop of the green flag, with Chris Madden overtaking outside polesitter for second on the first lap. It was a tight battle for third in the early running, with Shannon Babb sliding ahead of Hoffman to claim the position at the halfway point. Jon Hodgkiss slowed off the pace in turn three to draw a caution on the ninth circuit, backing the race up a lap and setting up a green-white-checkered finish. Restarting from the inside lane, O’Neal held his lead on the restart, with Madden slipping back to fifth. O’Neal won the heat, with Babb finishing second and Hoffman running third. Madden edged out Mason Zeigler to finish fourth, with Zeigler running fifth to transfer to the feature.

Polesitter Michael Norris edged ahead of fellow front-row starter Tim McCreadie out of turn four to take an early lead, as Steven Roberts challenged third-running Shane Clanton in the opening laps. Norris held a comfortable lead at the halfway mark, while fast qualifier Josh Richards worked his way back to sixth after losing a position. Finishing 1.473 seconds ahead of McCreadie at the checkered flag, Norris won the consolation, with Clanton rounding out the pdoium. Jason Jameson ran fourth, with Roberts taking the fifth and final transfer spot.

Overcast conditions with cool temperatures (highs reached the lower 70s) prevailed on Friday; once again no rain appears to be in the forecast, however. … One record was set on Friday: the largest age difference in preliminary night feature winners since Eldora’s pair of crown jewels went to the three-day format with two nights of twin 25-lap A-mains leading into Saturday’s finale. The gap between victors Billy Moyer of Batesville, Ark. (61) and Hudson O’Neal of Martinsville, Ind. (19) is a robust 42 years, 10 months and 17 days. … Hudson O’Neal became the first teenager to score a feature win during a crown jewel weekend at Eldora since 19-year-old Bobby Pierce of Oakwood, Ill., captured a preliminary A-main and the World 100 in 2016. … Pierce, who survived an original start scrape in a Thursday B-main to transfer and then advanced from 23rd to finish 11th in his feature, is using a Pro Power engine owned by Viper Motorsports’ Shawn Martin of Carlisle, Pa., who is at the track spectating this evening. … Dream XXV winner Brandon Sheppard of New Berlin, Ill., experienced a rare off night on Thursday, finishing 18th in the second 25-lapper with crunched right-rear bodywork on his Rocket Chassis house car. He timed eighth-fastest in his qualifying group but was a victim of the six-car invert; he fell from fifth to sixth early in his heat and wasn’t able to move up to transfer, forcing him to run a B-main. … Tim Lance of Brimfield, Ill., has moved into Bloomington, Ill., driver Jason Feger’s backup car for Friday’s action after the Bobby Pierce Racing machine he started the weekend in was damaged in a qualifying smack of the outside wall. … Australian Paul Stubber has scratched for the remainder of the weekend after slamming the turn-three wall hard in his Thursday heat, damaging a left-side frame rail in his car. He still is fielding his team car driven by his crew chief and fellow Aussie Kye Blight. … Kyle Strickler of Mooresville, N.C., and his Wells and Sons Motorsports team relocated their hauler from the infield to the upper pit area to get away from the noise and activity inside the track. He’s hoping the different perspective jump starts his effort after a frustrating opening night during which he finished 21st in the second preliminary feature. “(Racing in) dirty air is so bad, I thought my car was broke last night,” Strickler said. “It really messes with your head. The veteran guys, they know how to adjust. I have to learn.” … Dale McDowell of Chickamauga, Ga., made a solid charge forward in the first feature, finishing 10th after starting 22nd. His crew had to scramble to get him out for the B-main after a broken fan blade at the end of his heat forced them to install a new blade and radiator. ... Josh Hampton of Crab Orchard, Ky., tagged the turn one wall during hot laps, severely damaging his red No. 4c. Hampton nursed his machine back to the pit area with the right front tire and wheel kicked back under the car showing heavy damage.