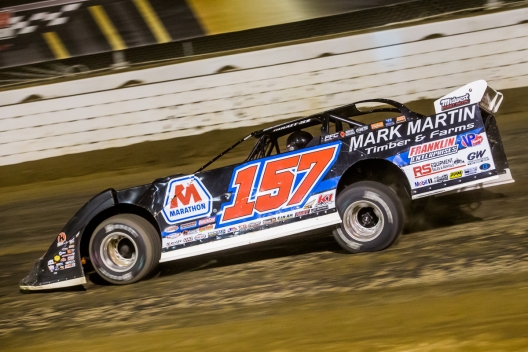 Winning his heat race and redrawing to start on the pole of the 30-lap Second Duel for the second straight night, Marlar led the entire distance, outrunning third-starting Chase Junghans of Manhattan, Kan., to earn a $10,000 payday and a guaranteed starting spot in Saturday’s Dirt Million finale.

“It’s hard to win a heat and get up front, so it’s bad when you let one get away like that,” Marlar, who finished fifth in his Thursday prelim, said. “Tonight the car was way better. I had something I could deal with out there today.”

Marlar shot to the lead at the drop of the green flag, with the frontrunners racing single-file through the early distance. As the race leaders approached the tail of the field one lap shy of the halfway mark, second-starting Michael Norris of Sarver, Pa., was able to close in on Marlar. But the reigning World of Outlaws Morton Buildings Late Model Series champion successfully navigated lapped traffic, to again hold a comfortable lead.

As the frontrunners continued to work through the back of the field, Junghans overtook Norris on lap 20 and began reeling in Marlar. But in putting a lapped car between himself and Junghans in the final circuits, Marlar was able to cruise to his eighth victory of the 2019 season.

“There for a little bit it was pretty tough, but then I realized they were actually helping me at the end,” Marlar said of lapped traffic. “Just don’t move from where they are. I can’t pass them, so he’s going to pass me. It was definitely elbows up early there and then there at the end, Dale (McDowell) is really good at hugging that bottom and making good laps. I knew if I was gaining ground on him late in the race like that, I would be fine.”

Finishing runner-up for the second straight night, Junghans was among the weekend’s highest points earners. As one of six drivers qualifying for the Dirt Million Dash, he is locked in to Saturday’s main event.

“The third time’s a charm tomorrow, right?” Junghans said. “Mikey’s hard to beat. I wish the track would have got a little bit wider there for us. We’ve still got a little bit of tuning to do on this thing but it’s really good. Just build off it tonight and last night and I think we’re in the dash, so we’ll just throw a couple things that we’re thinking about and go from there.”

With a pair of top-five finishes in Thursday and Friday’s preliminary events, Norris too earned a starting spot in Saturday’s Dirt Million Dash and 100-lap finale. He said he’s finally starting to find a rhythm with the Clint Bowyer Racing team.

“Just to run with these guys was pretty awesome,” Norris said of his competitors. “The car was really good there. I thought we might actually have a shot at Mikey there. But we got a little snug there at the end and lapped traffic kind of played a factor. We’re happy to have two solid nights. We’ve kind of been struggling lately in the No. 5 and it feels good to feel like me again, getting the consistency back.”

Outside polesitter Dale McDowell edged head of fellow front-row starter Mason Zeigler out of turn four to take an early lead. McDowell maintained a comfortable lead at the halfway mark, with Zeigler racing nearly a half straightaway ahead of third-running Devin Moran. Charging around the high side, Moran closed in on Zeigler late-race but was unable to make a pass. McDowell won the consolation, with Zeigler taking the second and final transfer spot.

Third-starting Michael Norris slid ahead of front-row starters Jared Landers and Jonathan Davenport in turns three and four to take an early lead. Landers slipped back to third, as Davenport closed in on Norris at the halfway mark. As Norris continued fend off Davenport at the front of the field, Landers fought back challenges from a hard-charging Darrell Lanigan. Pulling away in the final laps, Norris won the heat, with Davenport finishing second. Landers held off Lanigan to run third.

Polesitter Mike Marlar charged to the front of the field at the drop of the green flag, with third-starting Boom Briggs shooting past Josh Richards to run second. Marlar stretched his lead at the halfway point, as Richards began reeling in Briggs. Leading by a half straightaway, Marlar won the heat, with Briggs running second and Richards third.

Outside polesitter Chase Junghans shot ahead of fellow front-row starter Tyler Erb out of turn two to take an early lead. The frontrunners raced single-file at the halfway mark, with the top four cars distancing themselves from the rest of the field. Moving to the high side, Erb closed in on Junghans late-race but was unable to challenge for the lead. Junghans won the heat, with Erb finishing second and Rick Eckert third.

Tripping the clock with a time of 17.350 seconds, Tyler Erb of New Waverly, Texas, was the quickest qualifier for Friday’s Second Duel. He’ll start on the pole of the evening’s fourth heat race. Mike Marlar of Winfield, Tenn., and Jared Landers of Batesville, Ark., will join Erb as heat race polesitters in the Second Duel.

Wonderful weather conditions prevail for the second night of the Dirt Million weekend with high temperatures settling in the lower 70s under partly sunny skies. Almost fall-like temps dropping into the 50s are expected this evening with virtually no chance of rain; Saturday’s forecast is nearly identical. … The 54-car field is down two from Thursday’s roster following the early departure of Zack Dohm of Cross Lanes, W.Va., and Dave Hess Jr. of Waterford, Pa. Both drivers experienced problems at the start of Thursday’s program. … Chase Junghans of Manhattan, Kan., was extremely happy with the performance of his XR1 Rocket car after finishing a close second to Jonathan Davenport of Blairsville, Ga., in Thursday’s second 30-lap Duel. “My car felt good all over the place honestly,” Junghans said. “But we’ve been good in shows like these (preliminaries to major events) and then sucked on Saturday, so hopefully we put together a complete weekend this time.” … Michael Norris of Sarver, Pa., registered his first top-five finish since joining Clint Bowyer Racing in late June as the fill-in driver for the sidelined Don O’Neal of Martinsville, Ind., placing fourth in the first 30-lap Duel after falling from the outside pole to sixth and then rallying late in the distance. “It feels good to run like that,” Norris said. “My car really felt good. I’m excited for the rest of the weekend.” … The 55-year-old O’Neal, who has been out of action since undergoing surgery for torn ligaments in his knee, is spectating at Mansfield to watch Norris and his son Hudson. O’Neal also has another duty this weekend alongside his wife: they’re babysitting Don’s toddler grandchild, the daughter of his older son Houston. … Gordy Gundaker of St. Charles, Mo., was the only driver not running at the finish of Thursday’s first Duel. He retired with five laps remaining after his car’s motor mounts broke; his engine then dropped down slightly, causing the fan to get into he rack-and-pinion and bust the radiator. His crew welded the motor mounts back to the frame for Friday’s action. … Ryan Markham of Ashland, Ohio, has his battle-tested 2016 Swartz car repaired from significant damage it sustained when he smashed the inside wall entering turn three during Thursday’s time trials. He had to use a Port-A-Power to straighten the mount’s front clip and replace most of the front suspension components and the radiator, but he’s ready to go. “I went home last night, went to O’Brien’s (a favorite bar) and a couple beers and something to eat and then went to sleep,” Markham said. “I got up this morning and we worked from about 11 (a.m.) to 3:30 (p.m.) to get the car finished up.”

The Dirt Million action continues Friday at Mansfield Motor Speedway with another set of $10,000-to-win preliminary events. The winner of each of the night’s features is guaranteed a starting spot in Saturday’s finale.

Scott Bloomquist of Mooresburg, Tenn., and Jonathan Davenport of Blairsville, Ga., were the winners of Thursday’s prelims. The pair is among the six drivers that will be locked in to the Dirt Million Dash, which will set the first six rows of Saturday’s feature lineup.

Friday’s program will be identical to Thursday’s, with the field split into two duels. Drivers will qualify within their respective group, with each program including three heat races, one consolation and a 30-lap feature. The top six finishers from each heat will transfer to their respective feature, with the heat race winners redrawing for starting spots 1-3 and second-place finishers redrawing for spots 4-6.

Drivers will earn points based on their performance in Thursday and Friday’s preliminary events. Saturday’s heat race lineups will be determined by points accumulated over the first two nights of preliminary action.