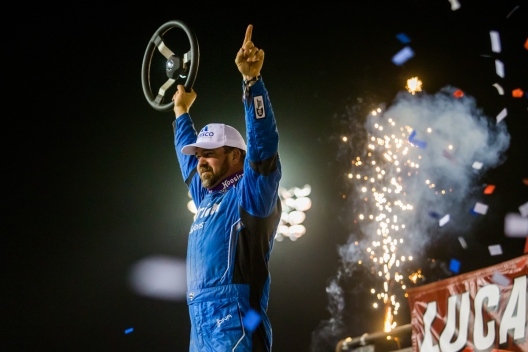 Sliding ahead of polesitter Mike Marlar of Winfield, Tenn., in turns three and four, the third-starting Davenport assumed the point on the fifth circuit, holding off the hard-charging Junghans and Pierce in late-race lapped traffic to win the second of four 30-lap Dirt Million preliminary features.

“I was looking around,” Davenport said after the race. “I couldn’t really tell (who was behind him). I couldn’t here nobody under me but I was trying the bottom, the top. I couldn’t ever make the middle work. It was just way too dirty. The hole was bigger in the middle getting in three.

“I finally got Stormy (Scott) beside of me on the bottom, so I knew I had that lane blocked, because he was pretty good. He was actually a little better than I was off the corner. I knew if I could just stay there, maybe I could be too wide for the second-place guy.”

Winning his heat race and redrawing to start on the pole, Marlar led the first four laps as Davenport battled his way past second-starting Ricky Weiss of Headingley, Manitoba. With Davenport powering to the lead on lap five, Marlar slowed up in turn four, allowing Weiss to slip into second. As the frontrunners entered lapped traffic at the halfway mark, Weiss would start reeling in the race leader.

But Weiss wasn’t the only driver to get within striking distance of Davenport. Nosing ahead of Weiss to take second on lap 24, Junghans set his sights on the race leader, just as fifth-starting Pierce began his charge around the high side. In heavy late-race lapped traffic, Davenport fought back both Junghans and Pierce, finishing just 0.551 seconds ahead of Junghans at the checkered flag.

“I could barely see (crew chief) Jason (Durham),” Davenport said. “It’s really hard to see here. It’s really dusty. I could see him, but the straightaways are pretty treacherous. There’s so much loose crumbs up next to the wall. If I got up there too close, it would make my car sit down and I would miss corner entry. So I tried to look at him when I could but I just tried to stay focused on what I was doing. I finally got a little better when I moved down in one and tried to stay around the outside of the lapped cars.”

After fighting his way past Marlar and then Weiss, Junghans finished a narrow runner-up, with Pierce running third. Weiss finished fourth, with Marlar rounding out the top five.

As Junghans closed in on Davenport in the final laps, he said he was hoping lapped traffic would work to his advantage. While he finished one spot out of victory lane, Thursday’s preliminary was an all around solid night for the Kanas driver, who clocked the fastest time for the Second Duel.

“Those lapped cars, it was like a hornets nest,” Junghans said. “I was hoping one of those guys would shove down there in three and four. I felt really good around the bottom. But to be that close, I guess, after what we did last year year, we got wrecked on the first couple laps of the big show … hopefully we can do it again tomorrow, one spot better.”

Like Junghans, Pierce said he knew lapped traffic was going to play a factor right down to the checkered flag.

“I think lapped traffic was my best shot,” Pierce said. “I really had a roll going there. I seemed like those guys were getting a little bit slower and I just had to finesse my lines a little bit with that big hole in turn three. I wanted to charge that corner to get a good entrance but every time you had to back off and float through there. Besides that, this weekend is an awesome weekend.”

Charging around the high side, Shane Clanton stretched his lead in the early running, as Greg Oakes and Brett Bee batted for third. Clanton held a half straightway lead at the halfway mark, with Stormy Scott running a comfortable second. Unchallenged, Clanton won the consolation, with Scott finishing second to transfer to the feature.

Polesitter Hudson O’Neal edged ahead of Ricky Weiss to lead the opening lap, with the pair crossing the line nearly side-by-side on the second circuit. Sliding ahead out of turn four, Weiss led the third lap, with Bobby Pierce overtaking O’Neal when his charge was slowed. Stretching his lead to nearly a full straightaway at the halfway mark, Weiss won the heat, with Pierce running second. O’Neal battled back past Devin Moran to finish third.

Front-row starters Jimmy Owens and Kyle Bronson raced door-to-door out out of turn four on the opening lap, with Bronson edging ahead to take the lead. With Bronson making contact with the turn-two wall on the fourth lap, Owens was able to reel in the race leader and the pair racing side-by-side on the seventh circuit. Charging around the high side, Jonathan Davenport joined the battle up front in the final circuits, a three-car race ensuing for the lead. Overtaking Bronson in the final turn, Davenport won the heat, with Bronson and Owens rounding out the podium.

Rolling around the top side in turns one and two, outside polesitter Mike Marlar took an early lead. It was a tight battle for third in the opening laps, with Dale McDowell overtaking Brandon Overton on the third circuit. Junghans challenged Marlar at the halfway mark, with Marlar maintaining his advantage on the high side. The pair crossed the line side-by-side on laps seven and eight with Marlar nosing ahead once again. Holding off Junghans, Marlar won the heat, with McDowell running third.

Tripping the clock with a time of 16.847 seconds, Chase Junghans of Manhattan, Kan., was the quickest qualifier for Thursday’s Second Duel at Mansfield. He’ll start on the pole of the evening’s fourth heat race. Jimmy Owens of Newport, Tenn., and Hudson O’Neal of Martinsville, Ind., will join Junghans as heat race polesitters in the Second Duel.

Rain that fell overnight and into the early afternoon has left some large puddles across the Mansfield Motor Speedway pit area, but the track surface was ready for the scheduled start of hot laps on opening night of the Dirt Million weekend. Temperatures are in the mid-70s and aren’t expected to climb much higher over the next two days, which currently boast sunny forecasts. … During the drivers’ meeting for the 56 entrants held under a tent in the pits, Mansfield promoter Cody Sommer spoke briefly to forcefully put to rest any speculation that his position as co-owner of Scott Bloomquist Racing creates a conflict of interest. He said he’s heard whispers about his dual roles potentially being a problem but said that should not be an issue and asked anyone who thought there was a conflict to approach him to discuss the situation. … Saturday’s finale will offer only Lucas Oil Series show-up points because no provisionals for tour regulars will be available. … Billy Moyer of Batesville, Ark., wasn’t pre-registered and didn’t have the event on his schedule at the beginning of the week, but he has his new white Black Diamond Race Car in the pits alongside his son Billy Jr. … Another driver who didn’t pre-register but is in the field is Jared Landers, also of Batesville, Ark., who is piloting a former Jonathan Davenport-driven Longhorn car owned by Richard Haven of Elizabeth, Ark. Landers made his first start of 2019 in the No. 777 machine last weekend in the Topless 100 activities at his hometown’s Batesville Motor Speedway. … Rick Eckert of York, Pa., is ready to make just his fourth start this season outside his home state with his self-owned No. 0. … Dale McDowell of Chickamauga, Ga., is driving Kentucky racer Brandon Kinzer’s No. 18. … Bobby Pierce of Oakwood, Ill., has a new wrap on his XR1 Rocket mount that features countless $100 bills and a winking Ben Franklin on its hood. … Johnny Scott of Las Cruces, N.M., is driving a second family-owned car as a teammate to his twin brother Stormy for the second consecutive weekend. … At the end of the drivers’ meeting, Lucas Oil Series director Rick Schwallie picked 10 qualifying pills to determine the drivers who will be required to undergo random drug tests on Saturday afternoon.

Mansfield Motor Speedway’s second annual Dirt Million kicks off Thursday with a pair of $10,000-to-win preliminary events. The winner of each of the night’s features is guaranteed a starting spot in Saturday’s finale.

Thursday’s field will be split into two duels. Drivers will qualify within their respective group, with each program including three heat races, one consolation and a 30-lap feature. The top six finishers from each heat will transfer to their respective feature, with the heat race winners redrawing for starting spots 1-3 and second-place finishers redrawing for spots 4-6.

Drivers will accumulate points based on their performance in Thursday and Friday’s preliminary events. Preliminary feature winners, along with the highest points earners, will be locked into Saturday’s Dirt Million Dash, which will set the lineup for the first three rows of the weekend finale. Six cars will start the dash.

Saturday’s heat race lineups will be determined by points accumulated over the first two nights of preliminary action. The top five drivers in Dirt Million Reward Points, earned through social media, representation and revenue, are guaranteed a starting spot in Saturday’s feature.