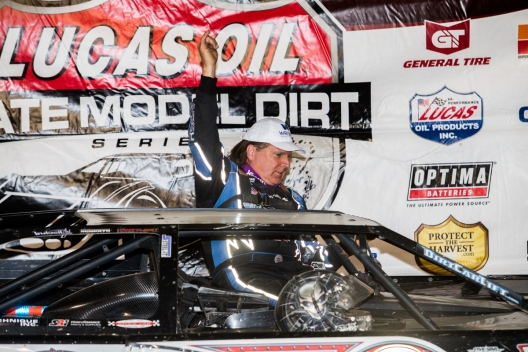 Racing at the track promoted by Cody Sommer — the co-owner of Scott Bloomquist Racing — the 55-year-old Hall of Famer from Mooresburg, Tenn., was without peer on the opening night of the second annual Dirt Million weekend. He shot into the lead at the initial green flag from the pole position and ran away from the field to register a runaway victory worth $10,000 in the first 30-lap Duel.

Bloomquist was never threatened in the caution-free preliminary feature. He dominated the action en route to piloting his self-designed car across the finish line a commanding 4.378 seconds ahead of Shinnston, W.Va.’s Josh Richards, who turned back several challenges from Brandon Sheppard of New Berlin, Ill., to secure the runner-up spot in his Clint Bowyer Racing XR1 Rocket.

Sheppard settled for a third-place finish in the Rocket Chassis house car. Outside polesitter Michael Norris of Sarver, Pa., placed fourth in the second Clint Bowyer Racing entry after slipping as far back as sixth and Darrell Lanigan of Union, Ky., overtook Dennis Erb Jr. of Carpentersville, Ill., racing down the backstretch on the final lap to complete the top five.

Bloomquist’s triumph guaranteed him a top-six starting spot in Saturday night’s 100-lap Dirt Million finale, which is likely to boast a winner’s purse over $100,000 after the final purse totals are announced by Sommer before the main event.

“It felt great ever since we figured out we needed to look at it after wrecking at Eldora (Speedway during June’s Dream XXV),” Bloomquist said of his car while standing in victory lane. “We put it on the jig last week and it was pretty far out. We got everything clipped and put back together and had a good run at Batesville (Motor Speedway’s Topless 100 weekend).

Bloomquist tallied his first win of the 2019 season — and first since his June return from right hip and leg injuries he suffered in a March motorcycle accident — just one week earlier in a Lucas Oil Late Model Dirt Series-sanctioned Topless 100 preliminary feature. He appeared primed to chase a bigger check on Saturday after his Thursday-evening cruise around the 4/10-mile oval where he tested earlier this year during his recovery.

Not surprisingly, Bloomquist expressed confidence about his chances in the weekend’s headliner while acknowledging that he’s still not quite 100 percent physically in the wake of his accident.

“Absolutely I think the car can do it, and I think I can stick it out,” Bloomquist said. “We’ve run some hundred-lappers now. I’m really sore afterwards, but the next day we can giddy-up and go.”

Richards, 31, started third and moved past his CBR teammate Norris for second on lap two but never drew close within striking distance of Bloomquist. He was preoccupied fighting off Sheppard’s attempts to grab the bridesmaid spot.

“(Bloomquist) He was pretty much in a league of his own,” Richards said. “When he got caught up in lapped traffic I thought we were gaining just a little bit, but that was just because he caught traffic and was probably riding at that point.

“We had a great night tonight, so that’s good. We definitely have to get a little bit better, but this place has always been pretty good to us as far as speed goes so hopefully we can try to get another solid run tomorrow (during another twin-feature preliminary night).”

Notes: Bloomquist dedicated his victory to Chris Madden of Gray Court, S.C., who had to abandon his bid for a fourth straight crown jewel win as Bloomquist’s teammate after suffering a fractured left eye socket in a fall from a golf cart earlier in the week on the Mansfield grounds. “I really hate that he’s not here,” Bloomquist said. “It was really a misfortunate accident that kept him from being here, but we’ve got some positive hope that he may be back here in a couple weeks for Eldora (the World 100).” … Dennis Erb Jr. ran as high as fourth and Tim McCreadie of Watertown, N.Y., climbed up to fifth before the pair settled for finishes of sixth and seventh, respectively. … Nineteen of the race’s 20 starters were running at the finish with 15 on the lead laps. … The feature’s lone early retiree was Gordy Gundaker of St. Charles, Mo., who pulled off the track on lap 25.

Outside polesitter Billy Moyer Jr. led the opening lap, with Kent Robinson shooting from fourth to second in one circuit. Moyer and Robinson raced door-to-door through the early distance, with Moyer running the high line to maintain the advantage. The top two cars distanced themselves from the field at the halfway mark, with Robinson continuing to challenge Moyer for the lead. Robinson slipped under Moyer in turns three and four on the white flag lap, but Moyer fought back his charge to win the consolation.

Polesitter Scott Bloomquist led the opening lap, with fellow front-row starter Doug Drown falling to the tail of the field after a miscue in turn four. Bloomquist began stretching his lead early, as Dennis Erb Jr., ran a close third to second-running Rick Eckert. Erb overtook Eckert for second on the sixth lap, as Drown attempted to work his way back from the rear of the field. Bloomquist won the heat, with Erb finishing second and Eckert third.

Polesitter Michael Norris took an early lead, with fellow front-row starter Jared Landers slipping to fourth in the opening laps. Fifth-starting Tyler Erb was on the move early, challenging Darrell Lanigan for second on the third circuit. It was a tight battle for fourth at the halfway point, with Gordy Gundaker advancing from the seventh starting spot to challenge Landers. Holding a comfortable lead, Norris won the heat, with Langian and Erb rounding out the podium.

Polesitter Brandon Sheppard shot to the front of the field at the drop of the green flag, as third-starting Tim McCreadie attempted to reel in outside polesitter Josh Richards. Sheppard and Richards crossed the line side-by-side on the fourth circuit, with Richards pulling ahead down the backstretch to take the lead on the fifth lap. Leading the remaining distance, Richards won the heat, with Sheppard finishing second and McCreadie running third.

Tripping the clock with a time of 16.645 seconds, Brandon Sheppard of New Berlin, Ill., was the fastest qualifier for Thursday’s First Duel at Mansfield. He’ll start on the pole of the evening’s first heat race. Michael Norris of Sarver, Pa., and Scott Bloomquist of Mooresburg, Tenn., will join Sheppard as heat race polesitters in the First Duel.

Rain that fell overnight and into the early afternoon has left some large puddles across the Mansfield Motor Speedway pit area, but the track surface was ready for the scheduled start of hot laps on opening night of the Dirt Million weekend. Temperatures are in the mid-70s and aren’t expected to climb much higher over the next two days, which currently boast sunny forecasts. … During the drivers’ meeting for the 56 entrants held under a tent in the pits, Mansfield promoter Cody Sommer spoke briefly to forcefully put to rest any speculation that his position as co-owner of Scott Bloomquist Racing creates a conflict of interest. He said he’s heard whispers about his dual roles potentially being a problem but said that should not be an issue and asked anyone who thought there was a conflict to approach him to discuss the situation. … Saturday’s finale will offer only Lucas Oil Series show-up points because no provisionals for tour regulars will be available. … Billy Moyer of Batesville, Ark., wasn’t pre-registered and didn’t have the event on his schedule at the beginning of the week, but he has his new white Black Diamond Race Car in the pits alongside his son Billy Jr. … Another driver who didn’t pre-register but is in the field is Jared Landers, also of Batesville, Ark., who is piloting a former Jonathan Davenport-driven Longhorn car owned by Richard Haven of Elizabeth, Ark. Landers made his first start of 2019 in the No. 777 machine last weekend in the Topless 100 activities at his hometown’s Batesville Motor Speedway. … Rick Eckert of York, Pa., is ready to make just his fourth start this season outside his home state with his self-owned No. 0. … Dale McDowell of Chickamauga, Ga., is driving Kentucky racer Brandon Kinzer’s No. 18. … Bobby Pierce of Oakwood, Ill., has a new wrap on his XR1 Rocket mount that features countless $100 bills and a winking Ben Franklin on its hood. … Johnny Scott of Las Cruces, N.M., is driving a second family-owned car as a teammate to his twin brother Stormy for the second consecutive weekend. … At the end of the drivers’ meeting, Lucas Oil Series director Rick Schwallie picked 10 qualifying pills to determine the drivers who will be required to undergo random drug tests on Saturday afternoon.

Mansfield Motor Speedway’s second annual Dirt Million kicks off Thursday with a pair of $10,000-to-win preliminary events. The winner of each of the night’s features is guaranteed a starting spot in Saturday’s finale.

Thursday’s field will be split into two duels. Drivers will qualify within their respective group, with each program including three heat races, one consolation and a 30-lap feature. The top six finishers from each heat will transfer to their respective feature, with the heat race winners redrawing for starting spots 1-3 and second-place finishers redrawing for spots 4-6.

Drivers will accumulate points based on their performance in Thursday and Friday’s preliminary events. Preliminary feature winners, along with the highest points earners, will be locked into Saturday’s Dirt Million Dash, which will set the lineup for the first three rows of the weekend finale. Six cars will start the dash.

Saturday’s heat race lineups will be determined by points accumulated over the first two nights of preliminary action. The top five drivers in Dirt Million Reward Points, earned through social media, representation and revenue, are guaranteed a starting spot in Saturday’s feature.