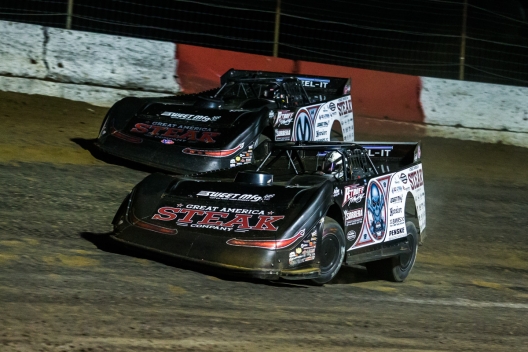 LOCUST GROVE, Ark. — Chris Madden’s win streak had to end sometime. Who better than his teammate and car owner Scott Bloomquist to end it? It was far from easy, however, as Madden didn’t go away without a fight and Bloomquist, still recovering from a March motorcycle accident that left the hall of fame driver needing extensive surgery to repair his injured hip and right leg, had to withstand a rugged track surface for 30 grueling laps.

Bloomquist, of Mooresburg, Tenn., turned back multiple challenges from Madden, of Gray Court, S.C. — the most significant following a pair of restarts before the halfway mark — to win Friday’s Topless 100 preliminary feature.

After the final caution on lap 21, Bloomquist pulled away to win by 1.305 seconds. His series-best 94th career victory on the Lucas Oil Late Model Dirt Series was worth $5,000 and ended a 13-month dry spell. Bloomquist, who is still feeling the pains from his accident, gave his familiar shaka sign with both hands before gingerly exiting his car in victory lane.

“When you don’t really know if you’re gonna race again, a lot of thoughts go through your head,” said Bloomquist. “It’s been a little bit of a struggle getting back. They weren’t expecting us to be able to race this year. I’ve been enduring a lot of pain. I knew that we were capable of doing it still. You know, working with Chris (Madden) that’s our car and engine and everything, so I knew our equipment was up to it. I just had to get back to where I could take it.

“We’re just glad everyone hung in there with us and hopefully we things will turn around in these final races of this year and we can mow some down. You know, Chris has been doing such a good job. It’s nice to have to compete against something that’s a win-win.”

Series leader Jonathan Davenport of Blairsville, Ga., advanced from eighth to finish third, while fifth-starting Shanon Buckingham of Morristown, Tenn., and fourth-starting Mike Marlar of Winfield, Tenn., completed the top five. None of them had anything for the two team Bloomquist drivers though.

Bloomquist bolted ahead of fellow front-row starter and overall fast qualifier Madden on the opening lap and quickly pulled away. Negotiating the tricky surface in turns one and two was one of the biggest challenges.

“Turn one was still really loose … dirt everywhere and it had that big dip in it,” said Bloomquist. “But we could go through that. I could time it right. But this end, (turns) three and four was just slick and the car was super through that. I thought I’d lose the front end with the softer front tires, that being mandated. I thought that end we’d lose the front end, at least halfway through the race, but the car stayed good.”

Madden managed to pull even after a caution on lap eight. He used a smooth crossover move exiting turn two to dive under Bloomquist as the raced down the backstretch. For two laps, the duo were side-by-side at the line, with Bloomquist barely inching ahead. With Madden to his inside, Bloomquist had to find a different way around.

“He was close enough beside me there that I had to change my line,” Bloomquist said. “I got through turns three and four good enough on the top and just edged him enough where I could get back in my line because (turns) one and two for me was definitely better in the bottom. You never know how good you are. You know when the guy who’s been winning all the shows is up underneath you, you kinda suck it up a little bit.”

After his early bid for the lead was denied, Madden’s charge stalled in the second half of the race, thanks in part to a deflating right rear tire. A couple of circuits following at the restart on lap 15 was all Bloomquist needed to ease away.

“We had a right rear flat right after halfway there,” said Madden, who’d won four straight races entering Friday, including three consecutive on the Lucas Oil tour. “We were kinda putting the heat on him there for a little while and we had a caution and I went up there and buzzed my tires in that loose stuff and probably run over a rock and poked a hole in it.

"But we was able to manage. After that I kinda had to get out in the banking of the racetrack and just take it easy on the right rear. I felt it going down and didn’t want to blow it out. We needed a good points night. We managed to run second and Scott got a win for us, so that’s great.”

While the Team Zero cars battled up front, Davenport motored from eighth. He was hoping he’d get one last shot at either Madden or Bloomquist on the restart following the final caution, but he wasn’t able to muster a challenge.

“I just never did get took off as good as them,” said Davenport. “We’re just not quite as good as Scott and Madden right now. Congratulations to him on his first win back. It probably took longer than everybody thought it would. He’s been really good though, just had some bad luck.”

Notes: Drivers will use points accumulated from their combined finishes in Thursday and Friday preliminaries to determine the feature lineup and the consolation lineups for Saturday’s 27th annual Topless 100. Madden by virtue of his Thursday victory and Friday’s runner-up finish will start from the pole position in Saturday’s  main event. Bloomquist, who has a first and third in the two prelims, will start alongside his teammate on the front row. … Bloomquist added to his series-high win total on a night when the Lucas Oil Series celebrated his 600th event in series history. … His last series win was July 18, 2018 at Jackson (Minn.) Motorplex. … Unlike Thursday’s prelim feature, Bloomquist didn’t have to worry with slower traffic. Thanks to three timely cautions, 23 of the 24 starters were still on the lead lap. … The first caution was for Josh Richards of Shinston, W.Va., who slowed on lap eight with a flat. … The caution waved on lap when when Billy Moyer looped his car as he exited turn two. Raymond Merrill was collected in that incident when he slid into Moyer’s stalled machine sitting on the backstretch. … The third and final caution was for New Mexico’s Johnny Scott, who gave up a top-10 spot when he too slowed with a flat.

Friday’s prelim is the 600th Lucas Oil Late Model Dirt Series race in series history. … Series iron-man Earl Pearson Jr. of Jacksonville, Fla., has never missed a series race. … Series announcer James Essex has only missed four of the 600. He hasn’t missed a race in 10 years. … Scott Bloomquist of Mooresburg, Tenn., who had yet to win a series race this season, has never gone a full season without at least one win on the Lucas Oil tour. … After his third-place finish on Thursday, Bloomquist said he hoped the track would be a little smoother on Friday. “The track’s a little bit rough for my hip. I hope they get it a lot smoother,” said Bloomquist, who is still feeling the pains from his March motorcycle accident. … Tyler Erb of New Waverly, Texas, advanced to fifth on Thursday before a faulty crank trigger ended his night. He said he didn’t have many concerns over the track surface, which was a little rougher than many anticipated. “It’s not bad,” Erb said. “I think it’ll race better like this because when it’s so slick and slow it’s like rubber and then it’s just all in the same line. I think he did a good job on the racetrack … maybe just work on the holes a little bit.” … Hunter Rasdon of Jonesboro, Ark., said he felt like the track was a little better when the Comp Cams Super Dirt Series visited Batesville on July 26. “You couldn’t move around on it as good (Thursday) as you could a couple weeks ago,” said Rasdon. … Logan Martin of Greenbrier, Ark., won that CCSDS event here in July, but had a disappointing 22nd-place finish in Thursday’s prelim. “We folded the nose under and had to pull in,” said Martin. “We got that fixed today and fixed the nose a little bot different.” … Hudson O’Neal of Martinsville, Ind., suffered a broken J-bar just as he began to take his qualifying lap and did not get a time. He will start in the rear of his heat race. … Batesville’s Billy Moyer debuted a brand new Black Diamond Chassis on Thursday.

Chris Madden of Gray Court, S.C., stayed hot as he turned the overall fast lap during Friday’s qualifying. Madden stopped the clock at 14.276 seconds in the second group and will start from the pole position of the third heat. Madden’s car owner and teammate, Scott Bloomquist of Mooresburg, Tenn., was the quickest in the first group and will start from the pole of the first heat. Bloomquist’s time was 14.331 seconds.

“It’s pretty awesome for both of us to be quick time in Group A and Group B fast time overall,” said Madden.

Friday’s event is highlighted by a $5,000-to-win Lucas Oil Late Model Dirt Series preliminary feature. The full program includes hot laps, time trials, four heats and two consolations to set the 24-car starting grid for the 30-lap feature. No provisionals are awarded on Thursday and Friday. Drivers accumulate points from Thursday and Friday preliminary features, which will be used to set feature and consolation lineups for Saturday’s $40,000-to-win program.