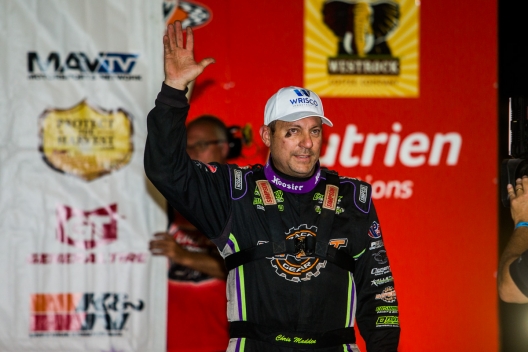 LOCUST GROVE, Ark. — Not so fast. Just when it looked as though Chris Madden’s three-race win streak might come to an end, the Gray Court, S.C., driver had an answer. Madden recovered from a lead-losing bobble on lap 20 of Thursday’s 30-lap Topless 100 preliminary feature to regain the lead on lap 22 and pull away for his fourth straight win overall and third straight Lucas Oil Late Model Dirt Series victory.

Drivers will use points accumulated from their combined finishes in Thursday and Friday preliminaries to determine the feature lineup and the consolation lineups for Saturday’s 25th Topless 100 at the 3/8-mile Mooney Starr-owned oval just west of Batesville.

Now enjoying a four-race win streak — a streak that includes a pair of Crown Jewel triumphs and $115,000 in winnings — since joining Scott Bloomquist Racing, Madden said he remains focused on keeping the streak alive. But while trying to stay perfect, a bobble entering turn one nearly cost him on Thursday.

“I went down there and was just trying to be too perfect and shut down early and tried to run through the holes straight, bottomed out and just got in a shove and just run across the racetrack and couldn’t get it back,” Madden explained. “Brandon made a perfect corner that corner as was able to get by me.”

Starting outside the front row alongside polesitter Mike Marlar of Winfield, Tenn., Madden grabbed the lead with a big run from the middle turns one and two and paced the field from the opening green. He had to muster a little extra, however, when Overton slipped by.

“I gathered it up and got a good run off of (turn) two over there and was able to stay to his quarterpanel,” said Madden. “When we went into (turns) three and four there, maybe a lap later or so, he bobbled and did the same thing and I had a good corner and I was able to get back by home. So, it worked out for us. Thank goodness we get another win, ‘cause it worked out for us.”

Overton started third and fell in line behind Madden and Marlar in the opening laps. He took advantage of a Marlar miscue on a lap-19 restart to move into second and quickly began to pressure Madden, taking the lead away just beyond the halfway mark. His time at the front was short-lived, however, as he made the same mistake Madden did.

“I just bottomed out. I tried to straighten up my entry just one time and the thing went bouncing up the racetrack … pretty much the same thing that happened to Chris,” said Overton. “Once it gets to bouncing you can’t stop it. Then you go back in there the next time and you ass-jack it to get it bent and the wheels spin. So anyway, I’ll take second. The way we’ve been doing, we definitely gained on it. The car’s definitely better from week to week, so I’m proud of that.

“Chris probably has the best car in the country right now, so to run second to him and then Scott (Bloomquist) run third. That’s pretty damn cool for me. The racetrack was cool. I know it was rough, but you really didn’t know who was gonna win and you know maybe if he’d hit it wrong again, maybe I could have snuck back in there.”

After advancing two positions, Bloomquist managed a third-place finish, but was hesitant when asked by DirtonDirt.com pit reporter Ben Shelton after the race if he thought he had enough to challenge the winner had he been able to get to Madden’s rear deck.

“It’d been hard to say. Chris did make a mistake there. Anything’s possible,” said Bloomquist, who continues to recover from injuries suffering in a March motorcycle accident. “I could go in on the bottom and rotate the bottom. The car was real maneuverable. It’s hard to say. I probably have a little bit of reserve right now. I don’t want to get out and hang myself out and end up causing an accident. We’re getting our reflexes and our speed back in our leg. It won’t be much longer.”

Notes: Madden’s third consecutive Lucas Oil Late Model Dirt Series victory is the 12th series triumph of his career and first-ever at Batesville Motor Speedway. His best Topless 100 finish was fourth in 2013. … Polesitter Mike Marlar was running second on a mid-race restart but slipped high and lost nearly 10 positions. He finished eighth. … The race was co-sanctioned with the Comp Cams Super Dirt Series. CCSDS points leader Tony Jackson Jr. of Lebanon, Mo., finished 10th, tops among Comp Cams tour regulars. … Eighteen of the 24 starters finished all 30 circuits. … The race’s lone caution came on lap 19 for Timothy Culp’s flat tire. … During the lap 19 caution, Tyler Erb gave up the fifth spot due to his engine’s faulty crank trigger. … Kyle Beard of Trumman, Ark., scratched from his consolation race after discovering a  water pump problem on his engine.

Mike Marlar of Winfield, Tenn., won the first heat to earn the pole for the 30-lap main event. “It was little bit of a wild heat race. The track is patchy and really fast right now. … But yeah, we have a good starting spot for the feature,” said Marlar. … Brandon Overton of Evans, Ga., didn’t mind the hooked up racing surface as he outran fellow throttle stomper Tyler Erb of New Waverly, Texas, to win the second heat. “As slick as everything’s been the last couple of weeks, it’s kinda fun,” said Overton. … Chris Madden’s impressive win in the third heat was perhaps more impressive knowing that the Gray Court, S.C., driver didn’t have his Scott Bloomquist Racing mount 100 percent to his liking. “We made just a little small adjustment before the heat race. Man this thing responds so well to adjustments. It responded, but a little too much, so well go back a little bit,” said Madden. … Without having to worry about passing points, Jonathan Davenport of Blairsville, Ga., was the fourth heat winner. He said the track was still very fast. “It’s just really aggressive right now,” said Davenport of the track surface. … Jared Landers of Batesville, Ark., was slated to make his season debut in a Richard Haven-backed machine, but didn’t qualify or start his heat at the Haven Motorsports team put finishing touches on their Longhorn Chassis. Landers said he could possible have been ready for a consolation, but opted to go back over the car before hitting the track. He hopes to compete in Friday’s program.

Entering the weekend on a three-race win streak that includes a pair of Crown Jewel victories and $110,000 in earnings, Chris Madden of Gray Court, S.C., said there’s no additional pressure. “It makes it easier to me,” said Madden. “You just keep going and keep digging.” … Devin Moran of Dresden, Ohio, is among drivers making their first Topless 100 appearance. Believe it or not, Moran’s hall-of-fame father Donnie never made a Topless 100 start in his driving career either. … Like Moran, Michael Norris of Sarver, Pa., who is subbing for Don O’Neal who’s out recovering from knee surgery, is making his first trip to Batesville also. … Johnny Scott of Las Cruces, N.M., will be aboard the family’s No. 1st this weekend as a teammate to his brother Stormy. … A year after following the Mississippi State Championship Challenge Series exclusively Neil Baggett of Columbus, Miss., has stretched his legs a bit and traveled some in 2019. “(Our schedule) is just hit or miss,” said Baggett as he finished up preparations on his car in the Batesville pit area. “It’s good to get away from home every once in awhile.” … Hall of Famer Jerry Inmon of Bruce, Miss., is in the stands Thursday taking in prelim action. “I still try to get to a couple (races) when I can,” said Inmon, who never made a Topless 100 start.