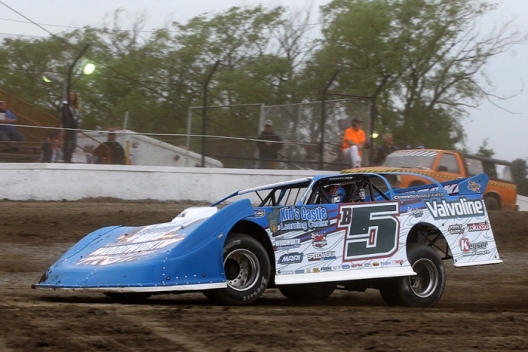 Rain that intensified shortly before Friday night's 40-lap DIRTcar Summer Nationals feature at Sycamore Speedway was to lineup forced the postponement of the $10,000-to-win event to July 8 or 9, depending on whether Saturday night's scheduled Hell Tour stop at Dirt Oval Route 66 Raceway in Joliet, Ill., is completed.

As the UMP Modified B-main was heading onto the track — the last race before the 40-lap Late Model feature — rain that had been spitting periodically since just before 7 p.m. CT intensified to the point that racing could not continue. Officials have the program under a rain delay as of 8:50 p.m.

Dennis Erb Jr. rolled to a flag-to-flag victory, beating a late-charging Allen Weisser by 1.997 seconds. Jonathan Brauns finished second after losing second to Weisser and Rusty Schlenk pulled off a last-lap pass of Spencer Diercks to place fourth in a race slowed by one caution flag.

Exciting his home track fans, Charlie Olson grabbed the lead on lap nine when race-long pacesetter Brian Shirley "just got in too hard" entering turn three and bounced through the thick cushion and went on to defeat Walker Arthur by 1.391 seconds. Paul Stubber finished third while Frank Heckenast Jr. rallied after sliding backward early to place fourth. Shirley slipped all the way to seventh in the finishing order.

Brandon Sheppard overtook Bobby Pierce on the final lap to steal the victory by 0.290 of a second. Jason Feger overtook both Rich Bell and Shannon Babb late in the distance to finish third. Bell also overtook Babb to claim the final transfer spot.

Bobby Pierce of Oakwood, Ill., was the fastest overall qualifier, turning a lap of 14.593 seconds to earn the pole position for the evening’s first heat.

Kankakee winner Brian Shirley of Chatham, Ill., was quickest in the second group with a lap of 14.605 seconds, putting him on the pole of the third heat.

Matt Shannon of Bartonville, Ill., didn’t turn a qualifying circuit after scratching from further competition due to terminal engine woes he suffered during hot laps.

After Thursday DIRTcar Summer Nationals opener at Kankakee (Ill.) County Speedway was run on one of the chilliest nights in recent Hell Tour history, Friday’s stop at Sycamore Speedway is producing some of the windiest Summer Nationals conditions ever. A steady breeze of 20-30 mph — with gusts even higher — has been swaying the limbs of the many large trees in the track’s park-like pit area. … Skies have been partly sunny throughout the day despite the stiff winds, but clouds began moving in shortly before the 5 p.m. CT drivers’ meeting. A chance of showers increases as the night goes on, though the biggest likelihood comes after midnight. … Sycamore management has spruced up the facility for their biggest Dirt Late Model event of the season. Among the noticeable items: the speedway’s walls boast a fresh coat of white paint and a giant American flag is flying high above the track on a crane positioned in the infield. … Brandon Sheppard of New Berlin, Ill., is making his first-ever start at Sycamore after making mechanical trouble during hot laps forced him to scratch from further action Thursday at Kankakee. He said he repaired the back of his car’s oil pump at his family-owned team’s shop. … Shannon Babb of Moweaqua, Ill., who won last year’s Summer Nationals feature at Sycamore, also had to make some repairs at his shop after dropping out of Kankakee’s feature with electrical problems. He’s hoping a master switch change has solved the problem. … Ryan Unzicker of El Paso, Ill., is in tonight’s field, but he said he expects to run only about 10 Summer Nationals events this season after being a Hell Tour stalwart for much of the past decade. He is planning to head to Fairbury (Ill.) Speedway on Saturday night for a regular #FALS Cup show rather than enter the Summer Nationals event at Dirt Oval Route 66 Raceway in Joliet, Ill. ... Dennis Erb Jr. of Carpentersville, Ill., has pulled out his second car for tonight's action after suffering engine problems in the machine he ran in Kankakee's feature.

The 2019 DIRTcar Summer Nationals makes its second scheduled stop with a visit to Sycamore Speedway, a track located in farm country about an hour’s drive west of Chicago. The oval hosts the Hell Tour for the third consecutive season and is offering a $10,000 top prize for the second year in a row.

Built by brothers Joe and Nick Fabrizius, Sycamore is now being operated by a third-generation of Fabrizius family members.

Previous Summer Nationals winners at Sycamore are Billy Moyer of Batesville, Ark. (2017) and Shannon Babb of Moweaqua, Ill. (2018). The two winningest drivers in Hell Tour history, both are expected to be in Friday’s field.