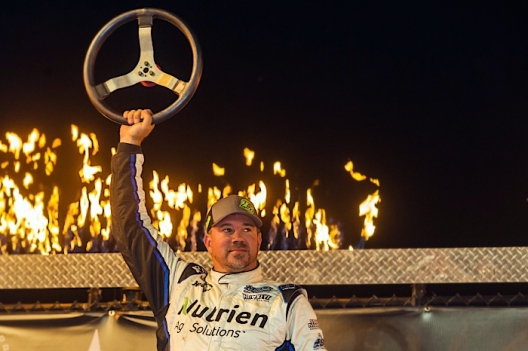 ROSSBURG, Ohio (June 7) — After finishing a narrow runner-up in a Thursday feature, Jonathan Davenport of Blairsville, Ga., was a man on a mission heading into Friday’s second round of Dream XXV preliminary action at Eldora Speedway.

The reigning Lucas Oil Late Model Dirt Series champion got the job done, leading all but the first lap of Friday’s first 25-lap feature to earn a $10,000 payday in his ninth victory of the 2019 season.

“We’ve been saving this car, this motor,” Davenport said in victory lane. “Everything’s just working just flawlessly. This car’s led almost every lap of competition its been in besides that heat race there. So I definitely got a great car.”

Racing side-by-side with polesitter Kent Robinson of Bloomington, Ind., down the backstretch, Davenport pulled ahead out of turn four to assume the point on the second lap. Sailing out front, the race leader caught the tail of the field on the ninth circuit, allowing Robinson to close the gap between himself and Davenport as the pair worked through lapped traffic.

But Robinson would never find himself in position to seriously challenge Davenport for the lead. Pulling away again in the closing laps, the two-time World 100 winner returned to Eldora’s victory lane, where he captured his $100,000 Dream victory back in 2015.

“I kept slowing down a lot,” Davenport said. “I was just afraid to move off the bottom. I was a little loose there, so I knew if I moved up, I’d be even looser. I went up just at the right time, I guess. I kept watching the board and I could see Kent (Robinson) close on me there. So I just took a chance, went to the top, barely caught the cushion and it give me a good enough run to get by Ashton (Winger).

“We tried a little bit different stuff tonight. I don’t think my car was quite as good tonight as it was last night. So we’ll just keep going through the notebook and keep fine-tuning on this thing. We’ve got a few more things we need to do and I think we’re going to be OK. Just as long as we get through these heat races tomorrow.”

After leading the first lap, Robinson slid up the track exiting turn four to fall to Davenport on the second circuit. But the former Eldora track champion was still pleased with his runner-up finish, a continuation of his early 2019 success that includes victories at Farmer City (Ill.) Raceway and Fairbury (Ill.) American Legion Speedway.

“I’m just happy to be here right now,” Robinson said. “They call it the world’s greatest dirt track and it continues to live up to that name. I’m just proud to be here and continue to get a little bit better in this race car. Small changes. It’s that close. It’s a really good feeling to be honest and a big improvement from last night. To run second to J.D. at Eldora, I’ll take it.”

“Normally we’re better on longer runs,” Weiss said. “We got it done yesterday and we just knew we needed a good points night tonight to start up front for the heat race tomorrow. We just that and the car’s in one piece. So we’ll get working on tires and we’ll be ready for tomorrow.”

Polesitter Shanon Buckingham took an early lead, with third-starting Ashton Winger in tow. Charging around the top side, fifth-starting Bobby Pierce overtook Jake Timm for third on the third lap, setting his sights on second-running Winger. Moving up to the high side, Winger held off Pierce at the halfway mark, as Buckingham stretched his lead out front. Making contact with the turn-four wall on lap nine, Winger allowed Pierce to close back in but he maintained his position. Buckingham won the consolation, with Winger fending off Pierce to run second and grab the final feature transfer spot.

Rolling around the high side, Chris Simpson pulled ahead of Brent Larson to take an early lead. After running side-by-side with the race leader, sixth-starting Ricky Thornton Jr. overtook Simpson to assume the point on the fourth lap. Simpson fell back another spot at the halfway mark, as Zack Dohm shot past to take the second spot. Holding nearly a straightaway lead, Thornton won the consolation, with Dohm running second to transfer to the feature.

A caution fell on the initial start when Jesse Stovall spun in turn four after several cars collided coming to the green flag. Challenging fellow front-row starter Michael Page for the lead on the restart, polesitter Jake Timm spun in turn four, collecting fourth-starting Scott Bloomquist. The race would be brought to another complete restart, with both stopped cars put to the rear of the field. As the green flag waved again, Page shot to the lead, with Trent Ivey and Dylan Yoder battling for third in the early running. By lap four, Bloomquist had made his way back to a feature transfer spot, overtaking Stovall to run fifth. Bloomquist’s charge continued in the late stages of the race, as he pulled ahead of Yoder to run third on lap seven. Holding a comfortable lead, Page won the heat, with Blankenship finishing second. Bloomquist ran third, with Yoder and Ivey grabbing the final two feature transfer spots.

With fourth-starting Jonathan Davenport attempting a slider out of turn four, polesitter Kyle Bronson edged ahead to lead the opening laps. Bronson maintained his lead at the halfway mark, as Andrew Reaume began reeling in third-running Kyle Strickler. Davenport closed the gap between himself and Bronson in the final laps but was never able to challenge for the lead. Bronson won the heat, with Davenport and Strickler rounding out the podium. Reaume and Mason Zeigler took the final transfer spots.

Slipping ahead of fellow front-row starter Ryan King down the backstretch, outside polesitter Darrell Lanigan led the opening lap, with third-starting Ricky Weiss in tow. Racing side-by-side out of turn four on the fourth circuit, Weiss nosed ahead of Lanigan down the backstretch to lead the following lap. Pulling away late-race, Weiss won the heat, with Lanigan finishing second. Brandon Sheppard, Tyler Bruening and Frank Heckenast Jr. grabbed feature transfer spots.

Polesitter Chris Madden edged ahead of Kent Robinson to take an early lead, as fellow front-row starter Chris Simpson slipped back to fourth on the opening lap. Rolling from the sixth starting spot, Jimmy Owens challenged Jimmy Mars for third at the halfway mark, the pair closing in on second-running Robinson as the laps clicked off. Stretching his lead to a full straightaway, Madden won the heat, with Robinson running second. Owens edge out Mars in the final laps to finish third.

DirtonDirt.com’s Andy Savary found a stat that he labeled “peculiar but true” when comparing the 2019 seasons of Thursday-night preliminary feature winner Darrell Lanigan of Union, Ky., and Scott Bloomquist of Mooresburg, Tenn., who is racing this weekend for the first time since February due to injuries he suffered in a March motorcycle event. According to Savary’s calcuations, despite his extensive layoff due to injury, Bloomquist competed in his 19th event of the season Thursday — and Lanigan also competed in his 19th event of ’19. … Brandon Sheppard of New Berlin, Ill., made some headway in Thursday’s second feature advancing from 16th to finish 10th, but he was hampered by right-rear spoiler damage from a scrape of the outside wall during the event. … Dylan Yoder of Selinsgrove, Pa., was a first-time Eldora starter who cracked the feature lineup through his heat. The Pennsylvania driver, who finished 23rd in the first A-main, said his experience running big, fast tracks in his home state definitely helped him get comfortable at the Big E. … Mike Mataragas of DeKalb, Ill., scratched from Thursday’s first B-main after his car sustained a busted radiator hose in heat action. He’s back and ready for action tonight. … Bobby Pierce of Oakwood, Ill., was never a contender in Thursday’s first feature, ending up as lapped traffic en route to a 20th-place finish. “Definitely need to get better today!” Pierce bottom-lined. … Kody Evans of Camden, Ohio, feared his weekend might be done after experiencing mechanical trouble during Thursday’s qualifying, but he’s back racing this evening after his crew discovered his problems related to a leaking oil line and issues causing his carburetor to be starved for fuel. … Andrew Reaume of Blenheim, Ont., enjoyed a solid Dream opening night, timing third-fastest in his qualifying group, transferring through his heat and finishing 13th in the feature. Considering it was just his second start since the 2017 season — he sat out the entire ’18 campaign because he needed a new car and engine and also became a father for the first time with the birth of his son Colton, now 9 months old — he was very pleased with his performance in his new XR1 Rocket. “Was I rusty? Damn right I was!” said Reaume, who debuted his car recently at Florence Speedway in Union, Ky. “The car was better than me.” … Michael Norris of Sarver, Pa., was scheduled to qualify in Group A tonight, but terminal engine trouble that knocked him out of second place on the last lap of a Thursday B-main forced him to head home early.