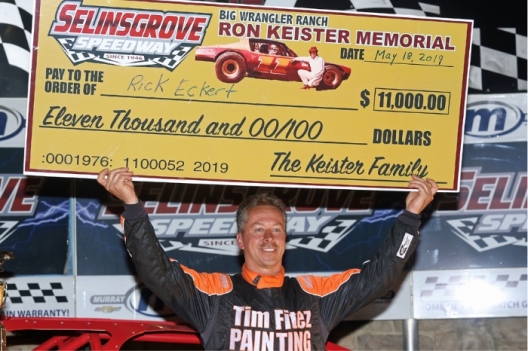 SELINSGROVE, Pa. (May 18) — Winning at Selinsgrove Speedway always will carry a special significance for Rick Eckert.

After the 53-year-old standout from York, Pa., overtook Mason Zeigler of Chalk Hill, Pa., with two circuits remaining to score a dramatic triumph in Saturday night’s 52-lap Big Wrangler Ranch Ron Keister Memorial, his eyes flashed with delight over the fact that he had returned to victory lane at a half-mile oval that effectively served as the launch pad for his stellar Dirt Late Model career.

“It’s awesome,” Eckert said while standing in his trailer cutting up a sheet cake he received for his $11,000 win in the unsanctioned event. “(In) 1984, the first Late Model race I ever drove was here. I was a senior in high school … and (had) the No. 0!”

Eckert is, of course, back behind the wheel of a machine adorned with his old No. 0 this year because he’s fielding his own equipment again. That fact added a bit more nostalgia to his second victory in five starts this season as an owner-operator, a success that marked his seventh career win at Selinsgrove and first since Oct. 6, 2012.

This one didn’t come easy. Eckert started third and immediately settled into second at the initial green flag, but, aside from when he nosed ahead to briefly lead the feature on lap 32, he spent his time chasing Zeigler.

Zeigler, 26, started from the pole position and appeared primed to make his first-ever appearance at Selinsgrove a triumphant one, but he couldn’t hold off Eckert. With the race winding down, the veteran slid underneath Zeigler rounding turns three and four and surged ahead to assume command as lap 50 was scored.

Moments later a caution flag flew for a multi-car tangle in turn three, but Eckert easily controlled the green-white-checkered restart to defeat Zeigler by 0.448 of a second.

Dylan Yoder of Selinsgrove, Pa., finished third, advancing from the ninth starting spot to claim the final spot on the podium. Fifth-starter Gregg Satterlee of Indiana, Pa., settled for fourth after ceding the third position to Yoder on lap 40 and seventh-starter Jared Miley of Pittsburgh, Pa., passed Kyle Hardy of Stephens City, Va., following the lap-50 restart to complete the top five.

Hardy finished sixth after running as high as third early in the race. He was surprise entrant at Selinsgrove after he and his car owner, Shawn Martin, decided to end their run following the World of Outlaws Morton Buildings Late Model Series on a full-time basis.

The race was essentially a nip-and-tuck battle between the XR1 Rocket cars piloted by Eckert and Zeigler, with Zeigler holding the upper hand most of the way. Eckert challenged Zeigler hard several times — most notably when he nipped Zeigler to lead lap 32 — but Zeigler continually  managed to briefly open breathing room on his pursuer.

“I watched for (Eckert), and I was trying to be conservative with my tires,” Zeigler added. “When I could hear him I’d really start to get on it and I’d create some distance, and then I’d sort of conserve a little bit.”

In the final analysis, though, Zeigler couldn’t get through turns three and four on the inside with quite the acumen that Eckert demonstrated. When Eckert stepped up his pressure following the race’s first slowdown — a caution flag on lap 41 that was mandated by event rules in order to set up an 11-lap sprint to the finish in honor of the late Ron Keister, who drove a No. 11 car before losing his life in a 1976 crash at Selinsgrove when he was a 28-year-old Late Model rookie — Zeigler was unable to survive it.

“He got to pushing,” Eckert said of Zeigler. “He did it earlier in the race a couple times and I got to him, but I just wasn’t close enough (to make a pass). So finally I said, ‘The hell with it. I’m just gonna run that top with him in one and two and try to keep as close as I can when we get to three.’ Finally, I stayed close enough down the back straightaway (heading to lap 50) that, when he didn’t turn for that bottom, when he went to that middle, I was like, ‘Oh, yeah.’ I shot in there and was fortunate to get by him.

“I seen his right-front (tire after the race), and his right-front was pretty well dying, and he was doing the best job he could to drive around it. And some laps he’d make a nice corner and then I didn’t gain anything, and the next lap I’d gain six car lengths. It was just hard for him to be consistent.”

Eckert also felt that leading the race hampered Zeigler — just like it had back on March 29 at Williams Grove Speedway in Mechanicsburg, Pa., where Eckert also drove the inside lane past Zeigler to grab the lead and win a 30-lap Zimmer’s United Late Model Series-sanctioned feature.

“He asked me why I beat him at Williams Grove the other week,” Eckert said of Zeigler. “I said, ‘I beat you because you watch your crew guys (signaling).’ And the worst part is, I could find his crew guys tonight. I knew where they were. The guy on the back straightaway had lights (to signal), so he was easy to find. The guy into one, he was a little harder to see, but he had to be hard for him to see too.

Zeigler conceded that he left the door open for Eckert.

“One of these days Rick’s gonna be leading and I’m gonna be searching behind and I’m gonna get his ass back,” Zeigler said with a laugh. “But no, the car was really good. The motor ran perfect. The car worked perfect. I just could not get through (turn) three. I’d bottom out real bad and push across the racetrack, and I knew Rick was probably hitting his marks every time. I just couldn’t get through the holes — I bottomed out every time.

“I was rolling the middle and felt better. I felt great in three and four when I’d roll the middle. But he just kept showing his nose down there, so I moved to the bottom and I kept bottoming out. I slipped up one time and there he was.

“Everyone said, ‘If you just got way, way down on the bottom, he couldn’t go around you,’” he continued. “I was like, ‘I was trying to do that, but when I’d bottom out, I couldn’t control where the nose goes.’”

Looking back on the race, Zeigler determined that he “just needed to run my own race and not worry about where anyone else in the past runs.” He had, after all, heard from several sources that moving off the bottom of the track in turns three and four could prove detrimental, so he resisted trying the top lane when Eckert was challenging down low and Zeigler’s crewmen were signaling that Eckert was coming on the inside.

“That top just looked so dirty and crumby, and everyone kept telling when we got here, ‘Don’t go in the top in three and four,’” Zeigler said. “If I didn’t hear it from 10 people, I didn’t hear it at all. In my head, I just thought, Don’t go up there.

“Well, then, the last lap, I said, ‘Screw it. I’m just gonna throw it out there.’ And I turned the fastest lap I turned all night. I just really wished I maybe went out there earlier.”

“Rick … he got me again,” Zeigler said, shaking his head.

Yoder, 27, was a solid third-place finisher in his family-owned 2016 MasterSbilt car. He would have preferred to see the race run without the mandatory lap-41 caution period because his hard-compound tire choice was working to perfection at that point.

“It took me like two or three laps to get going after that restart, and I just didn’t have enough time at the end after that last caution,” Yoder said. “The long green-flag run, we were really, really good. We were running them both (Zeigler and Eckert) down I thought. I didn’t want any caution, but it was mandatory from the start so you just go with it I guess.

“But still, it’s pretty good to start ninth and pass some of them guys and run right with them until the end.”

The race’s lone incident, on lap 50, came after Yoder’s father, Jim, and Jeff Rine of Danville, Pa., came together on the backstretch while racing at the back end of the top 10. Yoder hit the outside wall while Rine went spinning into the guardrail and came to rest sitting backwards in turn three. Also involved were Kenny Moreland and Shaun Jones.