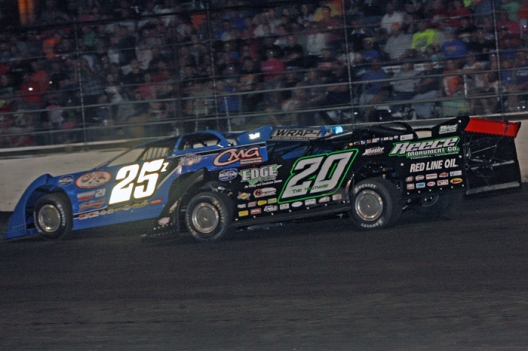 FAIRBURY, IL (July 25) — Two of the country’s hottest Dirt Late Model drivers — one an accomplished veteran superstar, the other a young up-and-comer who burst onto the national scene in the last week — played starring roles in the heat-race action that opened the 25th annual Prairie Dirt Classic weekend Friday night at Fairbury American Legion Speedway.

All six heat winners will redraw on Saturday night for starting positions in the first three rows of the Prairie Dirt Classic.

Coming off his WoO-leading 10th victory of 2014 on Thursday night at Independence (Iowa) Motor Speedway, Lanigan, 42, ran away with Friday’s sixth heat race. He burst from the third starting spot to the lead in short order and cruised to a final victory margin of 2.894 seconds — a full straightaway — over Dennis Erb Jr. of Carpentersville, Ill.

Lanigan’s run came one year after he struggled mightily at Fairbury. He failed to qualify through a heat race last year and was lapped twice during the feature, absorbing one of his worst outings of the 2013 season.

“I was kind of dreading coming here after last year,” said Lanigan, who holds a commanding lead in the WoO points standings. “But our (self-designed Club 29) car has been so good this year, I didn’t feel so bad about it. When you’ve got a car that’s as unbelievable as ours has been, you don’t mind going anywhere.”

Zeigler, meanwhile, proved his breakout showing last week on the UMP DIRTcar Summernationals — back-to-back wins at Brushcreek Motorsports Complex in Peebles, Ohio, and Attica (Ohio) Raceway Park — was no fluke with an electric run to the checkered flag in Friday night’s fifth heat. Making his first-ever start at Fairbury, the young Keystone State racer charged forward from the sixth starting spot to pass Jimmy Owens of Newport, Tenn., for the lead on lap 13 and then held off the Dirt Late Model superstar’s final-circuit challenge.

“It felt pretty good to do that,” Zeigler said of the slider he pulled to surge by Owens. “I hope I did it clean. I had my (crew) man Darrell on the back straightaway giving me signals telling me to go for the slide job. I knew when Darrell gave me the signal, it was time to go.”

Zeigler was almost at a loss for words after his latest success at an unfamiliar track.

“I stated sixth in the heat race and we were able to pass (Rick) Eckert, (Tim) McCreadie, Brady Smith, Jimmy Owens,” said Zeigler, who drove a family-owned Longhorn Chassis car. “I was just ecstatic as we were rolling through there. I didn’t even think what was happening, was happening. I was just sort of like, ‘Holy crap!’ I was just so excited.”

Saturday’s PDC finale, which also includes a full program of UMP Modifieds, is scheduled to begin with hot laps at 5:45 p.m. CDT. Two 20-lap B-Mains will lead off the Late Model portion of the action, with the 30-lap Prairie Dirt Shootout for non-qualifiers and the 100-lap feature to follow.

One year after struggling in the Prairie Dirt Classic — failing to qualify in a heat and getting lapped in the 100 — Darrell Lanigan completely dominated the final heat. He led all the way, beating Dennis Erb Jr. to the finish line by 2.894 seconds — a full straightaway. Morgan Bagley, meanwhile, held off a last-lap challenge from Billy Moyer to take the third and final transfer spot.

Carrying the momentum from his spectacular back-to-back Summernationals wins last weekend, Pennsylvania’s Mason Zeigler pulled off an impressive victory in the 15-lap prelim. Coming from the sixth starting spot, Zeigler overtook three-time Lucas Oil Series champion Jimmy Owens for the lead on lap 13 and turned back a last-lap challenge from the Tennessee superstar to emerge triumphant by 0.280 of a second. Tim McCreadie was a distant third. Brady Smith was a casualty, pulling to the infield on lap 11 while battling for fourth.

Brian Shirley burst into the lead at the drop of the green flag and rolled to a convincing victory by 1.813 seconds over Jonathan Davenport, who used an inside move to overtake Bobby Pierce for second on lap 11. Pierce attempted to regain the spot from Davenport with an inside thrust through turns one and two on lap 12 but ended up losing third place to Brian Birkhofer. Pierce settled for fourth, sending him to a Saturday B-Main.

Jason Feger grabbed the lead on an opening-lap restart after polesitter Scott Schmitt was put back by WoO officials for firing early at the initial green flag and never looked back en route to victory. Chris Simpson moved in to challenge Feger late in the distance but settled for second place with Scott Bull outdueling Wendell Wallace to place third. Schmitt, meanwhile, tumbled to sixth in the final rundown.

One month after making his Fairbury debut in the abbreviated Summernationals event, Gregg Satterlee rolled to a flag-to-flag heat-race victory. He easily outdistanced Eric Wells while Tim Fuller secured third place with a late-race pass of Fairbury favorite Kevin Weaver, who will have to run a B-Main on Saturday night.

Shannon Babb ducked underneath race-long pacesetter McKay Wenger to assume command on lap 10 and went on to capture the 15-lap heat. Wenger’s bid for a popular hometown triumph fizzled out due to a flat tire that forced him to pull to the infield one circuit after losing the top spot. Shane Clanton and Randy Korte moved up to second and third, respectively, after Wenger’s departure and finished there to move on to the 100-lapper.

Shannon Babb of Moweaqua, Ill. — the defending PDC champion who enters this weekend’s action hot off clinching his fourth career UMP DIRTcar Summernationals title — recorded the overall fastest lap in time trials, clocking in at 12.388 seconds in Group 1. He will start from the pole position in the first heat.

Bobby Pierce of Oakwood, Ill., who contended for victory in last year’s PDC, was quickest in Group 2 at 12.479 seconds. He will start on the pole in Heat 4.

Jonathan Davenport of Blairsville, Ga., had a rough start to his first-ever visit to Fairbury, breaking an engine during hot laps. He made a hasty switch to his K&L Rumley team’s backup car and timed 16th-fastest in Group 2.

Friday dawned cool and overcast over Fairbury, but rain that crossed the state of Illinois during the morning and afternoon stayed almost entirely to the south of the speedway. Just a few sprinkles fell at the track shortly after noon and temperatures rose as sun began peaking through the clouds late in the afternoon. … With a banner field of 60 cars on hand, WoO time trials will be split into two groups. Drivers in Group 1 will compete for starting spots in Heats 1-3 while those in Group 2 will battle for positions in Heats 4-6. … Six 15-lap heat races will be contested tonight with the top three finishers moving on to Saturday night’s 100-lapper. Each heat winner will redraw on Saturday for the top-six starting spots in the feature. … All 16 drivers already qualified for tonight’s postponed Summernationals feature are in attendance. Only three drivers scheduled to start in the Hell Tour B-Main are not on hand.

The biggest, most anticipated weekend in the history of the venerable Fairbury American Legion Speedway kicks off Friday night with a Prairie Dirt Classic qualifying program that includes an exciting added bonus.

After Friday’s WoO time trials and heat races are completed, the action will continue with the completion of the UMP DIRTcar Summernationals event that was postponed by rain on June 21. A 12-lap B-Main and a 50-lap non-point Summernationals feature paying $10,000 to win will close out the evening’s competition.

Brian Shirley of Chatham, Ill., and Rick Eckert of York, Pa., will share the front row for the start of the Summernationals feature, which has 16 drivers currently locked into the field. Two more starters will be added from the B-Main and four provisionals will fill out the lineup.

The Prairie Dirt Classic will conclude on Saturday night with WoO B-Mains, the 30-lap Prairie Dirt Shootout for non-qualifiers and the 100-lap PDC boasting a whopping $25,000 top prize.