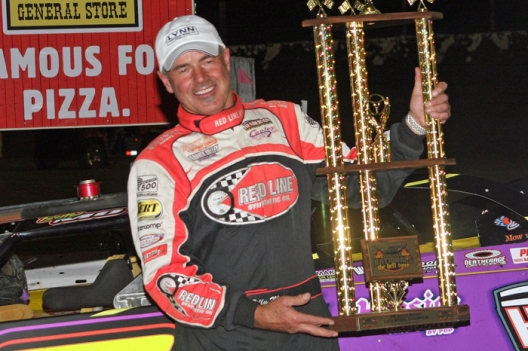 The $10,000 victory in a race postponed by rain on June 21 put a cherry on top of a spectacular summer surge for the 56-year-old Moyer, who won his last five Hell Tour starts of 2014. It was his series-best seventh win in just 12 Summernationals appearances this season.

Moyer also added to his already impressive win totals in Summernationals competition at Fairbury (seven victories since his first at the quarter-mile oval in 1994) and on the alltime Hell Tour checkered flag list, which he now tops with 89 career wins.

“We always like coming up through here and running,” said Moyer, whose last Summernationals score at Fairbury came in 2009. “(This area has) great dirt, great fans. It makes it fun to come up here.”

Righting an evening that began in frustrating fashion wen he qualified poorly and failed to transfer to Saturday night’s $25,000-to-win Prairie Dirt Classic headliner through a heat, Moyer marched forward from the seventh starting spot in the Summernationals A-Main to grab the lead from Brian Shirley of Chatham, Ill., on lap 18. He never relinquished the top spot as he turned back several bids from Ryan Unzicker of El Paso, Ill., over the race’s second half.

“We finally got it better here by main event time and that’s when it counted tonight anyway,” Moyer said of his Longhorn Chassis car. “We’ve got a long way to go tomorrow night (to contend in the 100-lap PDC) though.”

Unzicker, 33, settled for a second-place finish, 1.049 seconds behind Moyer. It was his eighth runner-up performance without a victory on the 2014 Summernationals.

Bobby Pierce of Oakwood, Ill., finished a distant third after starting 11th. The 17-year-old sensation reached third place with a low-side pass of York, Pa.’s Rick Eckert on lap 35 but never had a shot at the leaders because the race ran caution-free after a lap-one slowdown

Eckert, who started from the outside pole in the Rocket Chassis house car, dropped to fourth in the final rundown while Brady Smith of Solon Springs, Wis., placed fifth after surviving a spin on the inside of turn two in the midst of the lap-one tangle. Smith, who started third, did not have to restart at the rear of the field because his car never stopped moving in the incident.

Shannon Babb of Moweaqua, Ill., who clinched his fourth Summernationals title on July 19 at Oakshade Raceway in Wauseon, Ohio, advanced from the 15th starting spot to finish seventh.

Moyer’s most anxious moments came when he periodically approached packs of lapped cars during the race’s second half. Unzicker briefly pulled up to Moyer’s back bumper midway through the feature and drew nearly as close again in the final laps, but Moyer made the right moves to maintain command.

“When you’re leading, it’s the worst scenario when you get in them lapped cars like that,” Moyer said. “When you’re running behind you don’t mind to see that because the leader can make a wrong move, make a mistake.

“The track was just like so slippery, dusty, and I could roll in on about any of (the lapped cars) getting into the middle beside ‘em. But them you got a guy behind you and you don’t know how much room you really have. You’re just trying to play offense, defense, a little bit of everything.”

Unzicker seemed to be primed to overtake Moyer but couldn’t get the job done to end his frustrating succession of close-but-no-cigar outings on this year’s Summernationals.

“I thought we were gonna have a chance the last couple laps,” Unzicker said, “but once he got past that lapped car I figured it was kind of over.

“But you know, second to Billy Moyer is pretty damn good — just to be able to run with him is good.

“I don’t know what we need,” he added. “I guess we’ll just keep doing what we’re doing and we’ll get a win eventually.”

The race’s lone caution flag, on the first lap, was officially charged to Jimmy Mars of Menomonie, Wis., who was left stopped on the track after the chain-reaction scramble ahead of him.