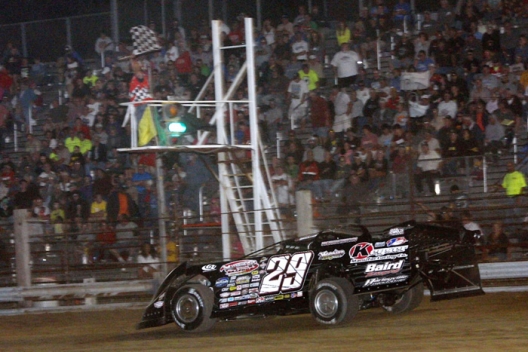 INDEPENDENCE, Iowa (July 24) — Darrell Lanigan is fast at most all of the tracks on the World of Outlaws Late Model Series schedule, but he may be best at Independence Motor Speedway.

The second-starting Lanigan, 44, of Union, Ky., led every lap of the 50-lap race to extend his lead atop the national tour’s all-time wins list with his 63rd career victory. Lanigan’s Club 29 Race Car crossed the finish line 3.2 seconds ahead of Heckenast, who also drove a Club 29 car in an event slowed by a single caution on lap 18.

Rick Eckert of York, Pa., advanced from sixth to finish third in the Rocket Chassis house car. Third-starting Tim McCreadie of Watertown, N.Y., used a high-side charge to move his Rocket Chassis to second early in the race before fading back to fourth at the finish. Billy Moyer of Batesville, Ark., finished fifth in his Longhorn Chassis.

Starting from the outside of the front row, Lanigan pulled ahead of Heckenast on the start of the 50-lap race and used the middle groove of the racetrack to quickly build a comfortable lead on the low-running Heckenast.

The high-running McCreadie briefly closed in on Lanigan when he took second around lap 10, but he faded following the lap-18 restart.

The resurgent Heckenast pressured Lanigan as the leaders raced through traffic around race’s halfway point, but Lanigan’s superior experience showed as he knifed his way through traffic and pulled away in the second half of the race.

“He’s got a good car and he’s definitely coming on here at the end of the year,” Lanigan said of Heckenast. “I never did see his nose there, but I had a guy on the backstretch giving my signals. He gave me a big signal there at the end, so I just kinda bided my time with those lapped car.”

Heckenast, who switched to a Club 29 car in late June, fell short of claiming his first career WoO victory, but the 26-year-old driver strengthened his command of the WoO Rookie of the Year chase with his solid performance.

“Everything went our way and we had a pretty good night,” said Heckenast, who recorded his first series top-five finish of the season. “Darrell, he’s got a lot of experience racing in traffic and being out front. I don’t have the confidence just yet to move around on the racetrack.

“He was so much better through traffic, so he’d get out on me. But after the restart ... my car was really good. I hung with him there for a while and didn’t wanna show him everything. But he’s so good, he normally gets faster from lap 40 to 50.”

The third-place finish leaves Eckert still looking for first WoO victory of the season, but the 2011 series champion was pleased with his team’s progress.

“It’s not from lack of effort because we’ve been working hard to get there,” Eckert said of the frustration of his current winless streak. “We couldn’t race by them tonight, but we were pretty close. We’ll take that.

“The guys have been working real hard and giving me a good car. Tonight was about as good as we’ve got. We had a really decent car, so I think we can work from that.”