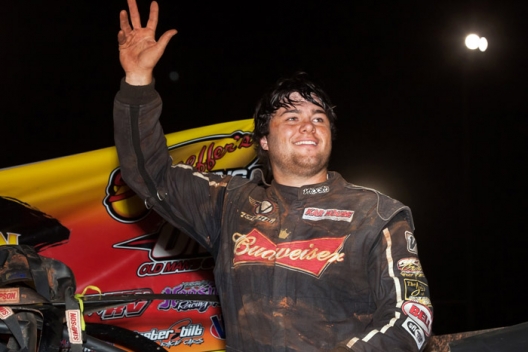 The Appling, Ga. driver captured his first-career Schaeffer Oil Southern Nationals Series by Old Man’s Garage victory and became the 27th winner on the Ray Cook-promoted tour when he overtook race-long leader Brent Dixon on lap 33 with a high-side pass and grabbed a $3,500 payday.

“This car has been just so good since we got in it,” Overton said of his Troy Baird-owned Bloomquist Race Car. “I went out West and raced two weeks, I can’t thank Troy Baird enough, all these fans, it’s good to be back home and to get one in front of everybody.”

Overton turned up the heat on Dixon late, desparate to find a way past before the checkers. A late caution helped him set up the winning pass.

“I finally rolled him. You know, it’s about time, we’ve been working hard,” the 23-year-old Overton said. “I can’t thank Cody Mallery, my little brother, he’s my new tire man, and my family, everybody that supports me enough, like I say Troy Baird, I couldn’t do it without him.”

Front-row starters Dennis Franklin of Gaffney, S.C., and Dixon brought the field of 22 to life with Dixon grabbing the early lead.

A caution flag flew on the second lap when the second-running Franklin and series points leader Chris Madden of Gray Court, S.C., made contact on the backchute, sending Madden’s machine towards the turn three wall. Madden would go to the work area and come back and tag the tail for the restart and work his way up to finish seventh in the final rundown.

A lap-three caution flag waved for Vic Hill when his No. 1 went over the turn two embankment on the third lap. Two late cautions also slowed the race with a lap-28 caution for debris on the backstretch and a lap-32 caution for Craig Vosbergen’s shredded right-rear tire.