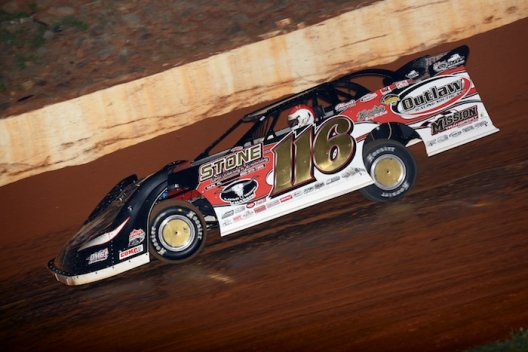 SEYMOUR, Tenn. (July 22) — Since beginning his battle with pancreatic cancer several months ago, Randy Weaver’s father, Glen, hasn’t been able to make many trips to the racetrack. But he was in the house Tuesday night at 411 Speedway in Seymour, Tenn., to see his son notch his fourth career Schaeffer Oil Southern Nationals Series victory.

Weaver started outside of the front row, jumping to the lead at the drop of the green flag and leading all 35 laps for a $3,500 victory. Staying perfect in his new Longhorn Chassis with his third victory since he climbed in the car July 11, Weaver dedicated the win to his father.

“This is definitely for Dad,” Weaver said in victory lane. “He ain’t got to go for a while, that old cancer’s got on him. The Lord’s been good to us, and he got to see me win one more race at least.”

“Madden, you got to watch him,” Weaver said. “This guy owns this series. Hats off to him, he’s been going through some stuff. Good to see him back racing. I looked up there and kept seeing that No. 44 coming and coming, and then the guy’s giving me signals and I was like, “Well, I’m just going to sit right here and hold on and hopefully he won’t pass me too fast.’ ”

Entering only his second event since taking a month-long break for a surgical procedure, Madden notched another podium finish after Monday’s third-place run at Wythe Raceway. Transferring to the feature event through a consolation race, Madden advanced from the sixth starting spot, taking second-place from King just before a lap-23 caution.

“We’ve been working on it,” Madden said of his No. 44 machine. “Can’t say enough about Scott (Bloomquist) and Ronnie Crooks from Penske … working on this thing the last three days. We’ve made miles of ground in just three days of scratching the surface. Those guys have really worked hard.

“We had a good race car tonight. I’d liked not to have seen those last few cautions. I think we had a shot for maybe racing for the win there.”

King, the evening’s fast qualifier, is a regular at 411 Speedway. After falling to the race leaders, he said he was happy with his podium finish.

“I thought there’d be a little more something on the bottom,” King said. “I had the advantage on these guys in qualifying. It took them a little longer for them to figure the racetrack out, where I’m used to running here every week. We just had to get up on the racetrack. I think I jumped down a little too soon trying to get by lapped traffic and let Madden get around me on the high side. I was just trying to hang on.”

The race was slowed by five cautions. The first yellow flew on the second lap when Bobby Mays of Jonesborough, Tenn., spun. Skylar Marlar of Winfield, Tenn., drew a second caution when he spun on the third lap. Another yellow flew on lap 12 when the No. 201 machine of Billy Ogle Jr. of Knoxville, Tenn., went up in smoke. Matt Henderson of Louden, Tenn., drew a lap-23 caution when he slowed on the racetrack. The fifth and final yellow appeared on lap 31 for a spin by Greg Roberson of Waynesboro, Va.

Notes: Weaver’s other victories in his new Longhorn came July 11-12 with a sweep of Ultimate Super Late Model Series events at Smoky Mountain Speedway in Maryville, Tenn., and North Georgia Speedway in Chatsworth. … Weaver's previous Southern Nationals victory came July 18, 2011, at North Georgia Speedway. ... The race marked the second of 10 events over 13 days on the Ray Cook-promoted miniseries. ... At Tuesday's drivers' meeting, it was announced officials from the Southern Nationals would officiate Oct. 24-25's Blue-Gray 100 weekend at Cherokee Speedway in Gaffney, S.C.; the event was originally sanctioned by NDRL, which folded.