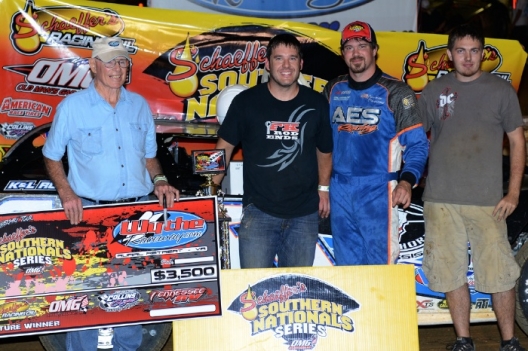 RURAL RETREAT, Va. (July 21) — Reigning Schaeffer Oil Southern Nationals champ Jonathan Davenport doesn’t plan on running the full tour in 2014, but that didn’t keep him from making his mark in the opener on the 10-race series founded by Ray Cook.

Davenport started on the pole Monday at Wythe Raceway and dominated all 35 laps for a $3,500 payday and his ninth career series victory. His No. 6 Rumley Enterprises-AES Racing entry was never seriously challenged on Wythe’s high banks.

“I just can’t thank this team enough. … it’s feels (like it’s been) so long since I’ve been in this thing. We took a couple of weeks off and regrouped, and (we’re) getting ready to go up north,” Davenport said. “I really wish we could’ve run this whole deal with ya’ll. Ray has a great series. We really have a good time.

Davenport took the checkers more than two seconds ahead of runner-up Dennis “Rambo” Franklin of Gaffney, S.C., while ninth-starting Chris Madden of Gray Court, S.C., advanced six spots for a third-place run. Outside front-row starter Stacy Boles of Clinton, Tenn., and Vic Hill of Mosheim, Tenn., rounded out the top five finishers at the half-mile oval.

“We just kind of rode around there. I never did push it to 100 percent — I did probably three laps there to go when we got that late caution. I didn’t really like to see that,” said Davenport, who plans to enter upcoming World of Outlaws Late Model Series events in Illinois and Wisconsin over the next two weeks. “We just keep on digging, making this thing better and better every time. We’ll see if we can’t get us one of these crown jewels. We’ve been so close this year, all these big races we’ve been to, we’ve been really, really good, and I’ve just gotta put 100 laps together and maybe we can pull one off.”

Driving a Longhorn Chassis like Davenport, Franklin debuted a new car and held the second spot all race long after starting inside the second row.

“We just couldn’t turn tonight. We was a little tight,” said Frnaklin, I wish we could’ve given him a run for his money, but for a brand new car, I’m pleased with it. Nothing fell off and we’ll go again next Thursday.”

Madden, back in action for the first time in a month after a break for a surgical procedure, had some help from chassis builder Scott Bloomquist in the pits on the way to his third-place run.

“We had a good car here coming up through there. (They) kind of got into my quarter-panel there and bent it up a little bit and hurt our aero (dynamics),” said Madden, the four-time series champion and winningest driver in history. “Overall we had a good night. Scott and them guys worked hard on the car tonight. We came out with a new (shock) package from Penske tonight. We’ve been working real hard on it and definitely made headway already in one night. Just as long as the driver can keep healthy long enough to make some more laps.

“We definitely didn’t need those cautions there. I felt like we had a good charge going on Rambo for second there, and I felt like we could’ve finished the pass, but the cautions came out and saved them guys.”

The race was slowed by four cautions, all for single-car incidents. Fourth-running Ty Dillon of Welcome, N.C., drew a lap-seven caution with a right-rear flat tire and another yellow flew on the 11th lap when Pierce McCarter of Sevierville, Tenn., slowed on the racetrack.

Brandon Kinzer of Allen, Ky., drew a lap-19 caution when his No. 18 machine began smoking and the last caution appeared on lap 27 as Davenport stretched his lead over the field.

Notes: Davenport’s nine victories are second on the all-time list behind Madden’s 23. … With 27 cars, Wythe more than doubled last year’s 13-car entry list for the opener. … Billy Ogle Jr. of Knoxville, Tenn., the champion on the sister series, the Old Man's Garage Spring Nationals, finished eighth at Wythe. … The five drivers with the highest combined point totals from the Spring Nationals and Southern Nationals will receive bonuses, with the top driver earning an additional $5,053. … Next up for the series is Tuesday's first-ever stop at 411 Motor Speedway in Seymour, Tenn.