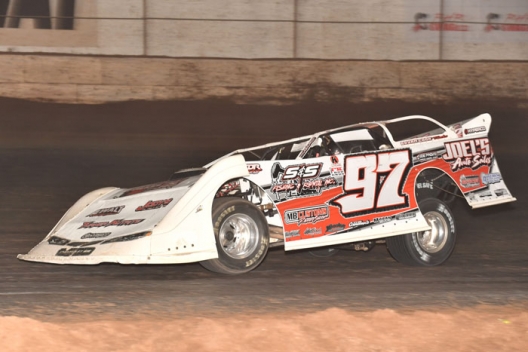 “It was pretty emotional out there,” Dillard said of victory lane, when he took a few moments to collect himself after firing off the event’s traditional celebratory six-shooters. “It’s just something that you work so hard for so long. Several years ago, I didn’t even think I’d still have the chance to be racing, much less in a Late Model. Just the opportunities I’ve had, I’ve been so blessed. And the people I’m racing with here, they have so much experience. … I’m still speechless I guess.”

Pierce led the first 17 laps from outside the front row but stopped in turn four after blowing a right-rear tire, handing the lead to the third-starting Dillard.

Bloomquist, of Mooresburg, Tenn., narrowly edged ahead of Dillard on the backstretch with six laps remaining as the frontrunners went above (Dillard) and below (Bloomquist) the slower car of Terry Phillips, but Dillard reaffirmed command when Bloomquist lost traction in the inside groove between turns three and four.

Bloomquist faded to finished 2.893 seconds behind at the checkers in a 40-lapper were rain fell the last several laps. Hudson O’Neal of Martinsville, Ind., was third ahead of Saturday’s opening race winner, Ricky Weiss of Headingley, Manitoba, and Brandon Sheppard of New Berlin, Ill., scored his fifth straight top-five finish. Polesitter Jimmy Mars of Menomonie, Wis., slipped back early and retired after 17 laps with a poor-handling car.

Dillard, who posted fourth-place finishes in his first two WWS outings and led an event at the third-mile oval last January, was confident while chasing Pierce.

“I knew we had a good car about halfway through when we got to second. I got to Pierce and I was just going to try and catch him in lapped traffic. Unfortunately for him, he had a flat,” Dillard said in victory lane. “(Crew chief) Donnie (Pederson) told me where I needed to be on the track the whole time … I don’t really know what to say.”

Dillard ran the high groove through the first half of the race, but with Bloomquist bearing down, he tried any groove that would help him navigate traffic.

“My crew guy told me they’d closed in there. I’d seen the top was getting pretty crumby in (turns) one and two, so I kind of found the bottom there — I’m not sure how close they were at the end — but that was definitely all she had,” Dillard said. “I knew there was a ton of good cars behind me and I was just trying to be smart through lapped traffic. But I couldn’t be too patient, because I knew they had to be there.

“Never in a million years would’ve dreamed this,” Dillard said, going on to thank all his supporters including Pederson. “I’m just so proud to do this for him as I am myself.”

Dillard made a key change that made the difference in Saturday night’s race, which came after a 45-minute rain delay on a night that precipitation eventually halted action before the completion of the USRA modified feature.

“Actually, we qualified good last year every time out,” Dillard said. “Actually I looked back at the notes today and there was one little thing I was missing out on. I did that and it just made the car drive better on the cushion early on. So hopefully we stumbled upon something. We’ve had a lot of good runs here and a lot of bad luck, so it’s nice to be able to capitalize on one.”

Bloomquist notched his third podium finish of the week, but his best shot at Dillard fell short as the leaders tried to put a lap on Phillips.

“(Turns) three and four was dominant up top. We could move around in (turns) one and two pretty good,” said Bloomquist, who’d been fighting fuel pressure issues. "We didn’t realize (the problem) because the gauge was reading (correctly), plenty of pressure, but it was the sending unit giving it a misreading. We chased that for a while and that’s messed up our past couple of races.

“I think we’re back on and we just need to keep on digging here. We’ve got one more. Hopefully we’ll get the big one.”

Pierce, whose defeat cost him a chance at reaching the five-victory plateau and $100,000 as part of the title sponsor’s bonus program, hated that something blew out his tire in turn four.

“We know it was something big or sharp. It was like instant — like BAM! It was so quick, I thought the rear end broke or something, it felt like that,” Pierce said. “I know Dillard was there, but I had more speed and definitely was able to show that after I had nothing to lose. I was really coming through there and it was early in the race and I had more laps and cautions, I think we could’ve gotten back up there. It happens, I guess.”

The miniseries concludes Sunday with a $14,000-to-win event with hot laps tentatively scheduled for 3:30 p.m. MST.

Polesitter Jimmy Mars raced to an eighth-lap victory, battling ahead of Joey Moriarty, Brandon Overton and a fifth-starting Chris Simpson. Overton and Simpson finished second and third after Moriarty got into the turn-two wall on the sixth lap. Moriarty held on for the fourth and final transfer spot over Stormy Scott and Pat Doar in the caution-free prelim.

Polesitter Cade Dillard took his first heat victory of the week, taking the checkers ahead of Scott Bloomquist. Garrett Alberson ran second early but settled for third while eighth-starting Terry Phillips got the final transfer spot. Dennis Souza spun in turn two for a lap-two caution.

Trying to get back on the winning track, Bobby Pierce raced to victory from the pole over Brandon Sheppard. Chase Junghans, who ran second early, and home-state driver R.C. Whitwell — who stole the spot from Don Shaw with a slide job after a restart — also transferred to the main event. Shaw retired after six laps. Two cautions appeared: Rece Vaught spun for a lap-three yellow and Thomas Hunziker spun on lap five.

Hudson O'Neal outdueled fellow front-row starter Earl Pearson Jr., on a frantic first lap, then fought off Ricky Weiss for an eight-lap victory. Pearson settled for third with Kyle Beard getting the final transfer spot in the caution-free prelim.

Three-race winner Bobby Pierce’s Keyser Quarter-Million Challenge chase continues. Five victories would give him $100,000 and four victories would give him $25,000 in bonus cash. … Saturday afternoon winner Ricky Weiss still has a chance at a $10,000 bonus if he can win the final two events; no other drivers are eligible for the bonus program. … Justin Duty of Mulino, Ore., bowed out of Saturday’s evening program while the team made an engine change to prepare for Sunday's finale; he hurt the engine on the last lap of his Saturday afternoon heat race. … Scott Ward of Watertown, S.D., hurt his motor early in Saturday afternoon’s program and scratched for the rest of the miniseries. … Among Late Model racers in the pits without: Nebraska’s Andrew Kosiski, Canada’s Mike Balcaen, Missouri’s Gordy Gundaker, Iowa’s Justin Kay and Florida’s Kyle Bronson.

Hot laps are scheduled for 4:30 p.m. MST with racing to start thereafter. Super Late Models highlight a card including USRA modifieds and X-mods.