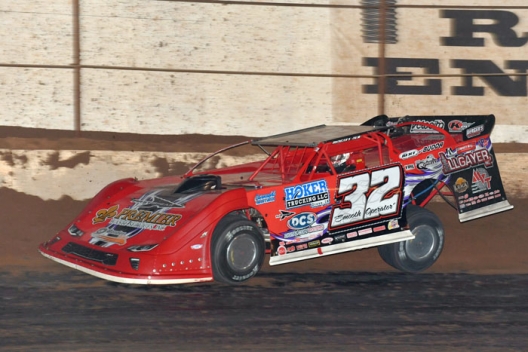 QUEEN CREEK, Ariz. — Three-in-a-row winner Bobby Pierce got a taste of the Keyser Quarter-Million Challenge bonus money with Friday’s victory at FK Rod Ends Arizona Speedway, but he’s not going to be satisfied with $10,000.

The Oakwood, Ill., driver's $5,000 victory kept him perfect after three rounds of the Keyser Manufacturing Wild West Shootout and guaranteed him an extra $10,000, but the triumph also kept alive his chance at a whopping $250,000 bonus if he can capture the final three races.

Pierce admitted that with the victory, “I’ll start thinking” about the possibility of six-figure bonuses. The bonus program also pays $100,000 for five victories, $25,000 for four victories and $10,000 for three victories at the third-mile oval southeast of Phoenix

In Friday’s 30-lapper, Pierce started on the pole but slipped back to fourth early before tracking down race-long leader Kyle Beard of Trumann, Ark., and taking command on the 20th lap. Beard, who lost momentum when he abruptly came upon the slower car of Billy Franklin on the backstretch, chased Pierce the rest of the way but couldn’t make a serious challenge in settling for a runner-up finish.

Hudson O’Neal of Martinsville, Ind., for third followed by Brandon Sheppard of New Berlin, Ill., and Jimmy Mars of Menomonie, Wis., who ran as high as second and fell from third to fifth in the final two laps.

Pierce, who took the checkers 0.765 seconds ahead of Beard and increased his week’s earnings to $25,000, was winded after the 30-lapper.

“I didn’t think I was going to (win). That was by far my hardest Wild West Shootout win. Kyle Beard, hat’s off to him. He drove a great race. Lapped traffic there really helped me out.

“We kind of missed a little bit on the setup — I know my dad will disagree — it was a heckuva car, but (we missed) just a little bit. We could’ve been a tick faster if we didn’t (make a change). I don’t know. The track was a lot different tonight. It wasn’t the same. Yeah, we were on top, but it didn’t have the holes as much, and really, we were carrying so much speed through there. Turn one, it’s been a little crumbly the past couple of nights, and (tonight) we were just hauling balls in there,” said Pierce, who has a five-race winning streak stretching back to 2018.

“I think Kyle, after racing his modified, had a little bit more track time than I did heading into the feature. Man, I thought he was going to hang on to that win. He drove a heckuva race.”

Beard, whose best previous Wild West Shootout finish was sixth in 2017, was also worn out trying to manhandle his car through the track’s roughest spots.

“I was so tired by then I was just holding on. I’ve gotta get to the gym a little bit,” Beard said. “When we caught up to one or two lapped cars, I kind of pulled back up on him. But I don’t think I had anything for him once he got in front of me.

“I was kind of disappointed and happy at the same time. Disappointed not to win and happy just to be able to run with these guys.”

O’Neal, the only driver with a heat race victory each night, posted his first top-five finish after fading with difficulties in the previous two features.

“We finally got all the bad luck out of the way breaking the last couple of nights and having some mechanical failures,” said the teen, whose Arizona action is his first since August shoulder surgery. “It feels really nice to just finish. I think we maybe could’ve had three of these top-threes if we wouldn’t have had any trouble.”

Two cautions slowed the action, first on the seventh lap when Scott Bloomquist slowed on the backstretch and headed pitside for a tire swap and again on the 10th lap when Chase Junghans slowed while running sixth.

Notes: Arizona native R.C. Whitwell was leading the first consolation but pulled off the track during a lap-four caution because there was a hole in his Jesse Hoskins-owned car's radiator. … Colorado driver Brandon Lewis was the lone newcomer in Friday’s action. California driver Rob Sanders returned after skipping Wednesday’s show. … Josh Cain won the X-mod feature while Rodney Sanders took the USRA modified main event.

Fast qualifier and polesitter Kyle Beard cruised all the way for an eight-lap victory in the third heat. Ricky Weiss finished second while outside front-row starter Tony Toste and Earl Pearson Jr. got the other transfer spots. Chris Simpson, who slammed the turn-one wall in time trials, didn't make the call.

Hudson O'Neal started outside the front row and stayed perfect in WWS heat competition, leading all eight laps. Brandon Sheppard chased O'Neal to the checkers while Chase Junghans turned back challenges from Scott Bloomquist in a battle for third. All four transferred while Billy Franklin finished fifth in the 11-car heat. Don Shaw came from the tail to sixth and Lyndon Bolt ran sixth early but pulled off just past halfway.

Kyle Beard of Trumann, Ark., topped 46 qualifiers. … Chris Simpson had lots of problems in time trials, First, he got into a slowing Brandon Lewis, and when getting back up to speed, Simpson went hard into the turn-one wall when it appeared his car wouldn’t turn. … Lewis, the night’s lone newcomer, pulled pitside before Simpson’s second incident. … Don Shaw, who switched to his backup car, lost a driveshaft and didn’t get a qualifying time.

He’ll go for win No. 3 Friday while four other drivers who’ve joined him in the top five in the first two features — Scott Bloomquist, Brandon Overton, Cade Dillard and Brandon Shepppard — will be among 40 or so drivers trying to deny Pierce the bonus cash, or get some themselves.

Hot laps are scheduled for 5:30 p.m. MST with heat races shortly before 7 p.m. USRA modifieds and X-mods are on the undercard of all miniseries events.

Friday’s action marks the start of four programs over a 48-hour stretch in the desert because of the makeup of the Jan. 6 rainout. Saturday’s schedule includes a doubleheader program with hot laps at 11 a.m. for the opener and 5:30 p.m. for the nightcap, while Sunday’s $14,000-to-win Super Late Model finale highlights the miniseries finale with hot laps at 3:30 p.m.