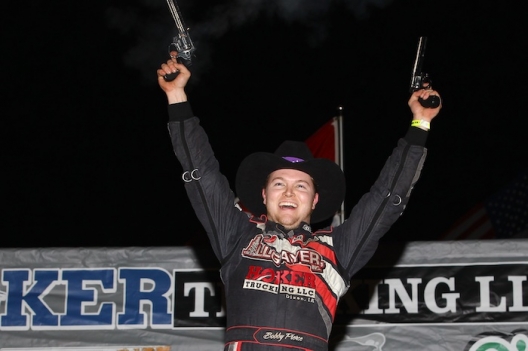 The 22-year-old Pierce led all but Wednesday's first lap at FK Rod Ends Arizona Speedway, fighting off a last-lap challenge from Brandon Overton for a $5,000 midweek victory in the second of six races on the miniseries at the third-mile oval near Phoenix.

“It’s definitely a little bit more pressure, but I’m a lot more relaxed to know that we’ve got a good car. Hopefully everything stays together … man, this is awesome,” Pierce said after his 30-lap victory gave him victories in the first two miniseries races for the second time in three seasons. “I love this track. It’s just the perfect shape and it just fits me really well and this Rocket Chassis was doing really good tonight.”

The other 40 or so drivers in the pits — including the same four drivers who joined Pierce in the top-five in the opener: Overton, Scott Bloomquist, Cade Dillard and Brandon Sheppard — will do their best to deny Pierce a bonus starting with Friday evening’s main event. A Saturday doubleheader and Sunday finale, which pays a series-high $14,000 to the winner, wraps up the miniseries that saw the opening Sunday’s event fall to rain.

Pierce’s previous opportunity at a Wild West Shootout bonus was doomed by Mother Nature in 2017 when the last two events rained out after Pierce won three of the first four features. (That season, the three-victory bonus of $10,000 wasn’t available).

“It’s always fun to come to Arizona,” said Pierce, who started outside the front row. “This year we’re real competitive, so heck, I can’t wait to get to the next one. It’s going to be a lot of fun.”

Overton, the Evans, Ga., driver who ran second the final 22 laps, dove under Pierce entering turn one on the final lap but fell short to second for a runner-up finish while Bloomquist, of Mooresburg, Tenn., picked up two spots on the 25th lap to finish third. Dillard, of Robeline, La., advanced seven positions for his second straight fourth-place finish and Sheppard, of New Berlin, Ill., rounded out the top five in the caution-free event.

Polesitter Chase Junghans of Manhattan, Kan., who led the first lap, fell out of the third spot on the 26th lap and settled for sixth.

Pierce built a comfortable lead of more than two seconds early in the race, but once Overton got into second, he continued to cut into Pierce’s lead, reducing it to 1.2 seconds at halfway, cutting it to less than a half-second with eight laps remaining, and drawing close enough for a last-ditch effort after seeing the white flag.

Pierce wasn’t sure it was Overton, asking in victory lane if Bloomquist had finished second after getting a brief glance at his closest pursuer.

“Brandon tried to slide me, showed his nose at me, and luckily we made a good (turns) three and four,” Pierce said. “I want to win and just have it be a little more comfortable. So we’ve gotta work on that.”

Overton said he “needed a little more” and wondered if he showed his hand too soon on the last lap.

“I probably should’ve waited until I got down here to (turn) four to slide him, but that hole was right there where I kind of needed to slide him at, and I didn’t want to hit him and knock us both out,” said Overton, who was making his second starter of Joey Coulter’s Rum Runner Racing. “All in all, ran fifth last time we raced, and to come back and run second, the car’s 100 times better than it was to begin with, so that’s a good sign. Like I said, just keep going. … maybe we’ll get one more here before too long.

“Everybody knows the first one’s the hardest one to get. It ain’t no big deal. I’m tickled to death just to be driving for these guys. I can’t thank the Coulters enough.”

Bloomquist switched grooves to reach the podium late in the race, but he wondered after the race whether his tire-cutting technique was working at a track he raced on for just the second time.

“We just tried to make the bottom work there for a while, and it just wasn’t happening,” he said. “So we got on top and we ran some good lap times there at the end on top … just a little too late. Just have to keep plugging at it.”

Twenty of 24 starters were running at the finish with 15 drivers completing 30 laps.

The third round of miniseries is scheduled for Friday with hot laps scheduled for 5:30 p.m. MST. Late Models chase a $5,000-to-win purse with USRA modifieds and X-mods on the undercard. Pierce is well aware another victory brings a $10,000 bonus.

Notes: Pierce notched his fifth career miniseries victory. … Terry Casey of New London, Wis., climbed into a race car for the first time in eight years but failed to make the feature field. He and fellow Wisconsin driver Steve Isenberg are sharing rides in the No. 942 car. … Alabama driver Billy Franklin broke a transmission and rear end while running in a transfer spot in a consolation race; the team plans to buy replacements or pull out the backup car Friday. … Attendance was the largest for a Wednesday night crowd in Wild West Shootout history. …Cole Searing repeated with an X-mod victory while Ricky Thornton Jr. won the USRA modified main. … Midweek practice has been moved to Thursday night; teams can practice for $200 per car and grandstand admission is free.

Polesitter Joey Moriarty failed to Arizona a home-state heat winner as Chase Junghans made  a lap-six slide job to win the eight-lapper. Moriarty settled for second while sixth-starting Cody Laney, piloting Pete Van Iderstine's No. 32B, finished third. Tony Toste slipped two spots but got the final transfer spot. Terry Phillips got up to second early but slipped back to finish fifth. A first-lap caution appeared when Lyndon Bolt spun in turn two, collecting Rick Ortega.

Bobby Pierce won a front-row battle of No. 32s, surviving a mid-race slip in turn four for a victory over runner-up Chris Simpson. Cade Dillard was a close fourth while R.C. Whitwell got the final transfer spots by stealing the fourth spot from Billy Franklin with two laps remaining. Thomas Hunziker spun mid-race but the race avoided a caution.

Polesitter Scott Bloomquist repelled Brandon Overton's first-lap charge and raced to victory in the second heat. Overton finished a solid second while Ricky Weiss was a close third and Jimmy Mars got the final transfer spot.

Following Sunday’s rainout, the second round of the Keyser Manufacturing Wild West Shootout is set for Wednesday evening at FK Rod Ends Arizona Speedway with a $5,000-to-win Super Late Model purse highlighting a program that includes modified and X-mods.

Hot laps are scheduled for 5:30 p.m. MST with heat races shortly before 7 p.m.

After capturing Saturday’s opener of the six-race miniseries, Bobby Pierce of Oakwood, Ill., will continue his pursuit of the Keyser Quarter-Million Bonus that pays $250,000 to any Super Late Model driver sweeping the Jan. 5-13 action.

The top four finishers in each of four heat races transfer to the 40-lap main event with the winners redrawing for the first two rows of the feature lineup. Two consolation races will transfer four drivers apiece to the 24-car field for the main event.

Wednesday’s event is the second of six races over the next nine days at the third-mile oval southeast of Phoenix. Action continues Friday and then Saturday with a doubleheader (hot laps at 11 a.m. and 5:30 p.m.) including a makeup of the rainout. Sunday’s finale includes a $14,000-to-win Super Late Model feature.