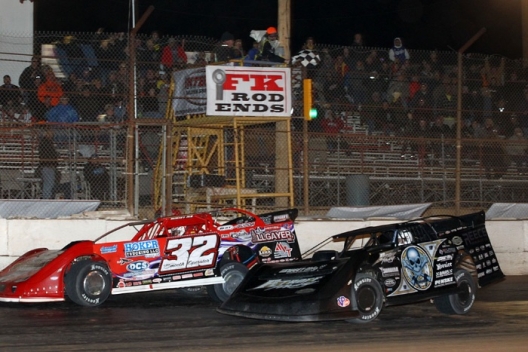 Hung up in traffic on the last lap at FK Rod Ends Arizona Speedway, Pierce fended off an inside move from Scott Bloomquist for a photo-finish victory in Saturday’s 40-lap Keyser Manufacturing Wild West Shootout opener.

“The picture showed I was just a nose ahead,” Pierce said. “I barely pulled it off. It was awesome."

Bloomquist knew Pierce’s traffic problems cost him what had been a comfortable lead, but he said in victory lane he’d like to watch the video to see how close it when he crossed the flagstand just inside the high-running Pierce.

“Most of the time black nosepieces lose photo finishes,” said the Hall of Famer from Mooresburg, Tenn.

The fifth-starting Pierce took the lead from outside front-row starter Chase Junghans on the 13th lap and led the rest of the way for his third straight victory since returning to his family-owned team after spending 2018 with North Carolina’s Dunn Benson Motorsports.

Bloomquist, making his miniseries debut, fell inches short of Pierce in settling for second while Brandon Sheppard of New Berlin, Ill., was third on a night when rain threatened the desert action. Cade Dillard of Robeline, La., improved 13 positions to finish fourth while Brandon Overton of Evans, Ga., rounded out the top five.

Smoke from under the hood as Pierce pulled into the infield after the race worried him of terminal trouble, but the team later discovered power steering issues that can be fixed — and caused Pierce problems late in the race.

“That was heckuva finish there and I’m so glad that it went my way. I was hustling the car really hard there to miss those holes and everything,” he said in victory lane. “I need to work out on my grip because every single hole you hit felt like you were hitting a pothole. It made for great racing. I was really surprised that bottom had a lot of grip down there. I might’ve been able to stay down there, but the top’s momentum just gets going and it’s hard to come off of there.”

Pierce knows a six-race sweep is a lot to ask — he’d wondered if a different driver might not win every night — but he’s glad to be in position to give it a shot against “the competition (that’s) stout out here right now. Scott, I didn’t really know how long it would take him to get rolling here, but with him being there right at the line, he’s got it rolling already.”

Bloomquist, who took second from Sheppard with two laps remaining, said his team has “a little bit of work to do” to dial in his Sweet-Bloomquist Race Car. The rugged conditions were tough on a 55-year-old racer who has struggled with shoulder issues.

“Usually when they drop the green you don’t feel nothing, but (if) you feel it while you’re racing, you hate to get up there and you know you’re doing damage (to your shoulder) but we decided we were going after it and that’s what we had to do,” he said. “Traffic came into play there at the end — and it was close.”

Sheppard held the second spot from laps 17-38 but was never able to seriously challenge Pierce.

“Definitely got something to work with for the rest of the week. We’re out on the six-night bonus, but realistically that’d be hard to do anyway. So I’m just glad to be up here on the podium and we’ll just give it all we’ve got the next five nights.”

The 40-lapper was slowed by three cautions, the first one on the second lap when California drivers Rob Sanders and Jason Papich were part of a turn-one scramble. The second appeared for a slowing Stormy Scott on lap 16.

The most significant yellow appeared on lap 25 with a turn-three tangle among top-five runners that knocked Junghans and Ricky Weiss out of contention as they battled in close quarters with Bloomquist.

The second round of the miniseries is scheduled for Sunday with hot laps at 3:30 p.m. MST with racing scheduled to begin about 5 p.m. Super Late Models, paying $5,000-to-win, are in action along with USRA modifieds and X-mods.

Notes: Pierce’s three-race win streak includes a preliminary victory at the Gateway Nationals. … Polesitter Hudson O’Neal battled tightly with Chase Junghans in the early laps but fell out of the top five before halfway and ended up seventh. … Jimmy Mars ran as high as third but retired with 12 laps remaining. … Despite failing to get qualifying times, Ricky Thornton Jr. (no transponder) and Rob Sanders (deck-height violation) fought their way through tail starting spots in heat races to transfer to the main event through consolation races. … Sprinkling rain begin during the X-mod feature but not enough to halt the program before the completion of the modified and Late Model mains. … Cole Searing won the X-mod feature and Casey Arneson won the USRA modified feature.

In his first competition since August, polesitter Hudson O'Neal cruised to victory in the fourth heat. O'Neal, who underwent shoulder surgery nearly six months ago, slid in front of Pat Doar at the outset and raced to an eight-lap victory. Doar finished second and transferred along with Stormy Scott and Joey Moriarty. Jason Papich's spin scrapped the first start.

Chase Junghans led all the way to capture the third heat, becoming the third straight outside front-row starter to win a heat. Polesitter Tony Toste transferred with a runner-up finished followed by Brandon Overton and R.C. Whitwell.

Brandon Sheppard squeezed past polesitter Scott Bloomquist exiting turn two on the first lap and survived Bloomquist's late charge to win eight-lapper. Bloomquist caught Sheppard in traffic late and dove under him to take the lead in turn three, but Sheppard went back ahead exiting turn four and held on. Bloomquist was second ahead of fellow Sweet-Bloomquist driver Ricky Weiss, a two-time WWS winner last season. Garrett Alberson for the final transfer spot while Nebraska teen Rece Vaught ran fourth early but retired just past halfway in the caution-free race.

Outside front-row starter Chris Simpson swept around polesitter Bobby Pierce at the outset and led all the way in the first eight-lap heat. The high-running Simpson wasn't challenged in taking the victory over fellow transferrees Pierce, Jimmy Mars and Earl Pearson Jr. Lyndon Bolt spun in turn four at midway to draw the race's lone caution.

Scott Bloomquist, quick qualifier in the second group, had battery problems on his second qualifying lap but wasn’t expected to have any issues for his heat race. … California driver Tony Toste, a 2016 SWDRA winner at Arizona Speedway, was quickest in the third group and is glad to be starting up front. Against such tough competition “you wanna start in front of ‘em,” Toste said while leaning against his car’s spoiler. “And you hopefully keep ‘em back there. … Ricky Thornton Jr. didn’t get a timed lap because he didn’t have a transponder on his car. … With his fast time, Bobby Pierce of Oakwood Ill., received $100 and a mini aluminum Late Model door sponsored by SportTruck RV. … Joey Tanner is piloting the car of fellow Oregon driver Thomas Hunziker after the team had a troubled trip to Arizona and spent time making repairs on the car after arriving; Hunziker is expected to compete Sunday with Tanner likely to drive some next weekend, too. … Western drivers were among the top five in each qualifying group and filled three spots in the fourth group (Arizona’s Joey Moriarty and Stormy Scott and California’s Jason Papich).

FK Rod Ends Arizona Speedway is set to host Saturday's first round of the Keyser Manufacturing Wild West Shootout, the six-race miniseries for Super Late Models with a $5,000-to-win purse on the line in the opener.

The 45 Late Models entered will be split into four groups for time trials with officials employing combination hot-lap/time trials to set the lineups for four heat races. Drivers start straightup by time.

The top four finishers in each of six heat races transfer to the 40-lap main event with the winners redrawing for the first two rows of the feature lineup. Consolation races will transfer four drivers apiece to the 24-car main event.

Because of the threat of late-night precipitation, the track plans to run the program in hurry-up mode, postponing grand marshal ceremonies and moving the $1,000-to-win Pro Power Dash for Late Model non-qualifiers to Friday evening.