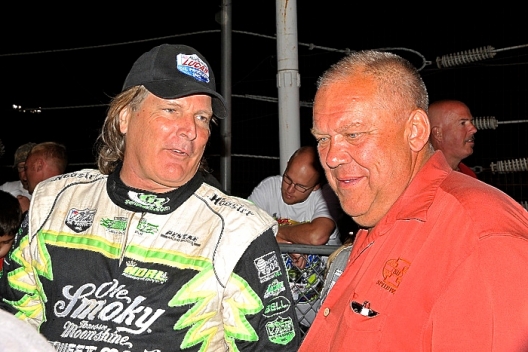 GREENWOOD, Neb. (July 19) — Scott Bloomquist had two words for his fellow competitors after emerging from his self-designed race car in victory lane Saturday at I-80 Speedway: “We’re back.”

Indeed, the 50-year-old Dirt Late Model Hall of Famer from Mooresburg, Tenn., was on Saturday night, collecting $30,000 for his triumph in the fourth annual Silver Dollar Nationals and ending an extended run of near-misses and second-place finishes. Bloomquist jumped to the lead at the drop of the green flag and never looked back, leading all 80 laps for his 50th career win on the Lucas Oil Late Model Dirt Series.

“We have run well all year long, but it has been frustrating the last month with all of the second-place finishes,” said Bloomquist. "Finally all the testing we’ve done has paid off. We had timing issues with the car yesterday, and seriously considered running the back-up, but the crew worked their tails off and got us out there. We were fortunate enough to start on the pole and the track was just tremendous. We could run anywhere on it.”

The polesitting Bloomquist darted out to the early lead over Jason Feger of Bloomington, Ill., and Chad Simpson of Mount Vernon, Iowa, who battled side-by-side for second in the opening laps before Feger gained the advantage. While Bloomquist cruised and the race for second cooled off, eighth-starting Jimmy Owens of Newport, Tenn., began his climb to the front on the bottom of the racetrack, moving into the top five on lap 12, taking fourth from Simpson on lap 20 and grabbing third from Brian Birkhofer of Muscatine, Iowa, just before a lap-24 caution for Jeremy Payne of Springfield, Mo., who slowed on the speedway.

On the ensuing restart, Bloomquist again inched away as Owens began to pressure Feger heavily for second, ducking under the No. 25 lap-after-lap. Owens would continue his assault until fifth-running Ryan Gustin of Marshalltown, Iowa, suffered a flat right-rear tire on the 38th lap to bring out a caution. The restart gave Owens an even better shot at Feger and the Lucas Oil Late Model Dirt Series points leader capitalized, taking second from the high-flying Feger with a move in the middle of the racetrack just past the halfway mark.

Birkhofer also came back to life with the restart, following Owens past Feger just a few moments later, before setting his sights on Owens and beginning an extensive battle for second that would last over the latter half of the 80-lap main event. After trying for over 10 laps, Birkhofer would eventually slip past Owens on lap 54 with a high-side charge off of turn two down the backstretch, but Owens would not go down without a fight over of the remaining distance and kept pace with Birkhofer.

The duo appeared to have a chance to catch Bloomquist when the leader approached three-wide lapped traffic on the 60th lap, but Bloomquist methodically worked past the slower cars on the bottom of the track and distanced himself from Birkhofer and Owens once again.

Shortly after Bloomquist re-established his cushion, Jason Papich of Nipomo, Calif., drew the final two cautions on laps 66 and 67. Papich tangled with fifth-running Don O’Neal of Martinsville, Ind., in turn four on lap 66, sending both drivers for a complete spin. Papich was charged with the caution while O’Neal was ruled to have kept moving on the racetrack and was allowed to keep his spot. One lap after the lap-66 incident, Papich spun again on the backstretch when a group of cars got bottled up in front of him at the tail of the field and left him no place to go.

Bloomquist again survived the late-race cautions and restarts. He went on to win without a serious challenge from Birkhofer, who was forced to turn back more pressure from Owens on the bottom in the final laps. Ninth-starting Billy Moyer of Batesville, Ark., came alive late to steal fourth from Feger, who rounded out the race’s top-five finishers.

While Birkhofer wasn’t a fan of the late-cautions, he conceded that he likely had nothing for the winning Bloomquist and was content with his runner-up finish.

“No, I didn’t want to see those last cautions,” said the pilot of the 15B. “Our car was better on the long runs. After those restarts, there was no way we could keep up with (Bloomquist). I was just trying to hold off Jimmy for second. Once (Bloomquist) cleared those three cars he had in front of him, it was pretty much over. I had fun racing these guys tonight and in front of this huge crowd. It was great to put on a show for the fans.”

Owens, who hasn’t finished worse than third in eight Lucas Oil Series events in July and picked up a $1,000 bonus from Crawford Supply and Traeger Grills for his performance in the tour's three most recent races, was also satisfied with his third-place run.

“We had a good car all night long,” said Owens. “We were able to roll through the corners better than almost anybody. Birky and I raced hard, and it seemed like we were out there forever. He was up top and I was in the bottom to the middle. I really like this track; we could run anywhere on it and I am sure the fans saw a good show these last few nights.”

The 80-lap, $30,000-to-win main event took the green flag at approximately 10:55 p.m. Central. ... 34 cars will start the feature. ... Rodney Sanders of Happy, Texas, earned $4,000 for his sixth straight victory on the USMTS circuit, outdueling Terry Phillips of Springfield, Mo., late in the feature for the second consecutive evening; both drivers will compete in the Late Model finale.

Tony Jackson Jr. held off multiple challenges from Chris Brown to win the 20-lap non-qualifiers' race. Jackson has elected to forego the $3,000 winner's pay and instead tag the tail of the 80-lap Silver Dollar Nationals main event, which pays $1,400-to-start.

I-80 Speedway co-promoter Joe Kosiski announced tentative plans to make the 2015 edition of the Silver Dollar Nationals $32,000-to-win and $1,500-to-start. ... Dave Eckrich slowed down the backstretch after making contact while racing with Jason Utter for a transfer spot in the opening consolation race won by polesitter Jeremy Payne; Bumper Jones scratched from the race which also transferred Terry Phillips and Utter. … John Anderson topped fellow front-row starter Jared Landers in the second consolation race with Jason Krohn claiming the final transfer spot; Chris Spieker slowed atop turn two to draw the race’s only caution. ... John Blankenship and Dennis Erb Jr. will receive Lucas Oil provisionals for the main event; other provisional starters are Dave Eckrich, Scott Lewis, Tad Pospisil, Bill Leighton Jr., Andrew Kosiski and Justin Gregg. ... Jason Papich will take a Lucas Oil emergency provisional. ... Drivers who did not transfer through consolation races and will not receive a provisional are scheduled to run the Belt Bash non-qualifiers' race; the winning driver has the option of a $3,000 payday or tagging the rear of the Silver Dollar Nationals starting field.

The three-day event kicked off Thursday with an open practice for Lucas Oil and USMTS competitors, along with a complete racing program for the Nebraska-based Super Late Model Racing Series, won by Kyle Berck of Marquette, Neb.

Friday's racing program included 10 total races for the 54 Late Model competitors, along with a complete racing program for USMTS drivers. No time trials were used for Late Models, instead, combined passing points from the heat races set the lineups for Saturday's action. The top 18 drivers in heat race passing points were locked in the 80-lap feature, while remaining drivers will run consolation races to secure feature starting spots.

Scott Bloomquist of Mooresburg, Tenn., is scheduled to start on the pole of Saturday's $30,000-to-win main event with Chad Simpson of Mount Vernon, Iowa., alongside. The pair of drivers earned an equal number of passing points Friday, with Bloomquist awarded the pole based on the drivers' fastest lap of the evening.

Jeremy Payne of Springfield, Mo., and John Anderson of Omaha, Neb., start on the pole of Saturday's consolation races. Each race will transfer three additional drivers to the 80-lap finale. The feature field of at least 32 cars will then be filled out with multiple rows of provisional starters.

Saturday's card, which also includes the $3,000-to-win Belt Bash for Late Model non-qualifiers, is scheduled to get under way with hot laps at 7:15 p.m. CST.

DirtonDirt.com is offering pay-per-view video coverage of the action. ... The race is co-sanctioned by the Lucas Oil Late Model Dirt Series and the Lucas Oil Midwest LateModel Racing Association. ... The Silver Dollar Nationals is Nebraska's richest dirt race, with the winner's purse increased from $27,000 to $30,000 and the starting purse increased from $1,300 to $1,400 this season. ... The event is apart of the ASi Racewear Crown Jewel Cup presented by DirtonDirt.com. ... No driver won more than a single heat race Friday. ... Previous race winners are Jimmy Owens of Newport, Tenn., Brian Birkhofer of Muscatine, Iowa, and Don O'Neal of Martinsville, Ind.; the red-hot Owens starts eighth in Saturday's finale, while Birkhofer rolls off fourth and O'Neal fifth. ... Ryan Gustin of Marshalltown, Iowa, with start sixth Saturday and hopes to duplicate his magical 2013 run at I-80 and seal the deal for his biggest career victory. ...  John Blankenship, Dennis Erb Jr., Jared Landers and Jason Papich are the only Lucas Oil regulars that are not locked in the 80-lap main event; Blankenship and Landers would be first in line for provisionals. ... Terry Phillips of Springfield, Mo., is not yet locked into Saturday's main event, but he is guaranteed a starting spot by virtue of an April 5 victory at I-80.