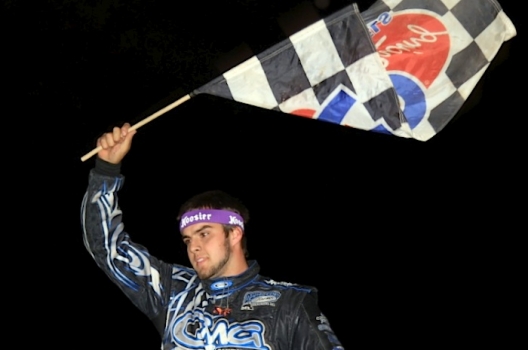 “It’s taken us seven years to get to this point,” said Zeigler, who registered his first-ever Summernationals triumph on Thursday night at Brushcreek Motorsports Complex in Peebles, Ohio. “We’re finally on the right path. I’m just so tickled to death with our whole program right now.”

Hot off the biggest win of his young career at Brushcreek, the 21-year-old Zeigler proved his breakthrough run was no fluke. He authored a virtual mirror-image performance at Attica, grabbing the lead from the outside pole at the initial green flag and maintaining firm control for the entire distance.

Actually, Zeigler’s run to Attica’s checkered flag might have been even more convincing. He wasn't threatened once in the caution-free race, racing alone at the front of the pack nearly a full straightaway ahead of his nearest pursuer for most of the 40 circuits.

Devin Moran of Dresden, Ohio, the 19-year-old son of Dirt Late Model Hall of Famer Donnie Moran, burst into second place on lap 15 and sliced more than a second off Zeigler’s 3.5-second edge by the 27th lap. But Moran lost ground in the closing stages, finishing in the runner-up spot a distant 3.689 seconds behind Zeigler.

Brian Shirley of Chatham, Ill., was even farther back in third place at the finish, ending the race more than three seconds behind Moran. Dan Stone of Thompson, Pa., started and finished fourth in his first career Summernationals feature start and Shirley’s Riggs Motorsports teammate, Jason Riggs of Harrisburg, Ill., recorded a Hell Tour career-best finish of fifth after wrestling the position from Doug Drown of Wooster, Ohio, on lap 33.

Shannon Babb of Moweaqua, Ill., put himself on the brink of a fourth career Summernationals championship by finishing seventh. He used a provisional to start the feature from the 19th starting spot after dropping out of his heat with a cut left-rear tire but steadily worked his way forward without the benefit of a caution flag.

The 40-year-old Babb crossed the finish line one spot behind Ryan Unzicker of El Paso, Ill., who entered the night trailing Babb by 45 points in the Summernationals standings. Babb left Attica with his advantage still at a healthy 43 points over Unzicker and 45 points over Shirley, unofficially putting him in position to clinch the $25,000 title with a 19th-place finish in Saturday night’s $10,000-to-win Hell Tour finale at Oakshade Raceway in Wauseon, Ohio.

Zeigler was victorious in his first career appearance at Attica, duplicating his successful debut at Brushcreek. His back-to-back scores left him shaking his head in amazement.

“We’re just super excited,” said Zeigler, who claimed just a handful of modest feature wins close to home over the past few years. “If we don’t do great tomorrow (in the Summernationals finale at Oakshade) we’re still gonna be happy with the weekend. How can’t you be?

“I think we finally have a good enough car and piece where we can be competitive at any level anywhere we go.”

Zeigler was certainly without peer behind the wheel of his family-owned Longhorn Chassis machine in Friday night’s headliner. After outgunning polesitter Duane Chamberlain of Richmond, Ind., for the lead off turn two on the opening lap, Zeigler built a half-straightaway advantage by lap 10 and extended it to a full straightaway only a couple circuits later.

With no caution flags to stymie him, Zeigler simply tore around the track, mastering the oval like a seasoned veteran.

“I felt like I was running a little bit different line than everyone else,” Zeigler said. “I was sort of (running) right through the dirty stuff right in the middle of the racetrack, and as I was lapping up through the field I noticed no one else was even trying (it). It was just real dirty, but there was a lot of traction there and I was able to motor up off.”

Zeigler noted afterward that he felt more comfortable in the cockpit than he ever had in his career.

“Ever since we got in this (Longhorn) car I feel like I can feel the changes I’m making,” said Zeigler, who debuted the machine less than two months ago. “Last year I worked with (mechanic) Austin Hargrove a little bit and I really started to understand the cars, and at this point now I can actually relate what the car’s feeling and I can talk to Kevin (Rumley of Longhorn Chassis) about it and make the car do what I want it to do.”

Moran attempted to make a run at Zeigler after climbing forward from the sixth starting spot in his MasterSbilt car, but he couldn’t catch the leader.

“We went underneath Shirley and them guys and I seen Mason and started running him down a little,” said Moran, who vaulted from fifth to second by passing Shirley, Stone and Chamberlain in the span of a lap. “But man, (Zeigler’s) on a rail right now, and we just didn’t have quite enough tonight.”

Shirley, 33, also had to be content with an outing that was overshadowed by the strength demonstrated by Zeigler and Moran.

“We were just a third-place car,” said Shirley, who kept alive his fleeting Summernationals championship hopes. “We drew third (starting spot) and we felt that with the same tires as everybody else we were probably gonna run there, and we did. Sometimes you take a shot at maybe having a tire come in and maybe making something happen, but we were just a third-place car.”

Shannon Babb took a few hot laps behind the C-Main and will use a Summernationals provisional to start 19th in the feature. Other provisionals went to Steve Lance Jr. (Summernationals), Steve Kester (UMP national points) and Ryan Markham (track). … At 9:35 p.m. EST, the Late Model feature is lining up in the pit area. Some light rain is to the south of the speedway, so officials are moving the program along in hopes of avoiding the weather.

Jason Jaggers advanced from the fourth starting spot to take the victory over Rocky Owens, who outdueled eighth-starter Matt Irey for the final transfer spot.

Bob Mayer emerged victorious in the 10-lap event after inheriting the lead when Ryan Markham pulled into the pits on lap seven. Josh Haynes and Jim Gingery also advanced to the back of the B-Main.

Duane Chamberlain led all the way to take the victory, but Rusty Schlenk made a late bid to steal the checkered flag. Schlenk pulled within striking distance with two to go, but Chamberlain dived underneath a lapped car rounding turns one and two on the final lap to build enough cushion to defeat Schlenk by 0.607 of a second. Tanner English, meanwhile, outdueled Larry Kingseed to finish third, with Kingseed settling for fourth.

Mason Zeigler picked up where he left off Thursday night at Brushcreek, storming to a flag-to-flag victory without facing a single serious challenge. Doug Drown finished 1.074 seconds behind in second, with Jeep Van Wormer and Brandon Sheppard close behind in third and fourth, respectively.

Dan Stone worked hard to emerge victorious — and qualify for his first-ever Summernationals feature — as he held off the relentless inside charges of Devin Moran for virtually the entire distance. Moran fell a half car length short at the finish, with Ryan Unzicker farther back in third and Devin Shiels placing fourth.

It was the Riggs Motorsports show in the first prelim, with Brian Shirley holding off teammate Jason Riggs to take the victory after leading the entire 10-lap distance. Riggs inherited second place during a lap-five caution period when points leader Shannon Babb drove into the pits with a left-rear flat tire; he didn’t return. Ryan Missler finished a distant third after surviving a lap-four scrape in turn four with Ryan Markham, who limped into the pit area moments later with damage and a flat tire, and Jeff Babcock repelled the challenges of Cody Scott to grab the fourth and final transfer spot.

Brian Shirley of Chatham, Ill., turned the overall fastest lap for the second consecutive night, stopping the clock at 14.465 seconds in Group 1. He will start from the pole position in the first heat.

Doug Drown of Wooster, Ohio, who won last year’s Summernationals event at Attica, was fastest in Group 2 with a lap of 14.489 seconds to earn the pole for the third heat.

Other heat polesitters will be Devin Moran of Dresden, Ohio, and Duane Chamberlain of Richmond, Ind.

With 37 cars signed in for action, qualifying will be split into two groups. Drivers in Group 1 will time for spots in heats 1-2 and those in Group 2 will compete for positions in heats 3-4. … Ryan Unzicker’s failure to convert a golden opportunity Thursday night at Brushcreek Motorsports Complex in Peebles, Ohio — he drew the pole position for the feature but faded to an eighth-place finish — while Shannon Babb enjoyed a solid third-place run left Babb on the precipice of a fourth career Summernationals title. Babb leads Unzicker by 45 points and Brian Shirley by 62 points; with a driver able to make up a maximum of 46 points in a 22-car field (the difference between first- and 22nd-place finishes), Babb will be able to clinch the title by merely starting Saturday night’s feature at Oakshade Raceway in Wauseon, Ohio, if he finishes ahead of Unzicker tonight and does not allow Shirley to close within 46 points. … Jon Henry of Ada, Ohio, is making his first Dirt Late Model start since rolling his car in a heat during the June 22 Summernationals event at I-96 Speedway in Lake Odessa, Mich. Henry has a new body and color scheme on the machine he flipped in hopes of “maybe changing our luck.” … Dan Stone of Thompson, Pa., has pulled out his own No. 21d for action at Attica after his Leo Milus-owned Super Deuce mount was sidelined by terminal engine trouble during heat competition at Brushcreek. Stone, who is making his first-ever visit at Attica and is still trying to crack his first Summernationals feature lineup after DNQs the last two nights, said his racing effort is down to its last powerplant after he’s experienced a broken engine in three of his last four starts.

The next-to-last event of the 2014 UMP DIRTcar Summernationals goes off Friday night at Attica (Ohio) Raceway Park, a high-banked, third-mile clay oval that hosts the Hell Tour for the fifth consecutive year. A 40-lap, $5,000-to-win feature headlines the evening’s action.

Summernationals points leader Shannon Babb of Moweaqua, Ill., is the only two-time series winner at Attica, claiming back-to-back victories in 2011 and ’12. Jason Feger of Bloomington, Ill., who is not on hand tonight, won the inaugural event in 2010 and Doug Drown of Wooster, Ohio, was triumphant last year.