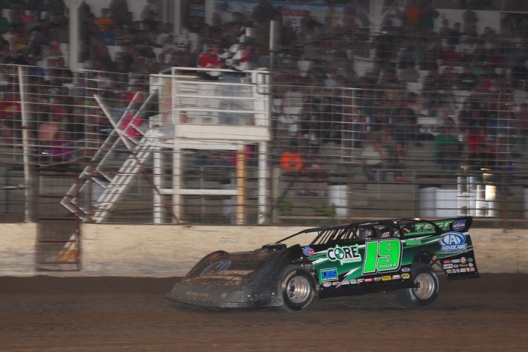 GRAND FORKS, S.D. (July 18) — A return to the site of his first career series victory was just what Tim Fuller needed to return to victory lane on the World of Outlaws Late Model Series.

Competing at the track where he earned his breakthrough series victory during his rookie WoO season in 2007, Fuller of Watertown, N.Y., overtook Tim McCreadie midway through Friday's race at River Cities Speedway and turned back McCreadie's late challenges to claim his first series victory since Aug. 17, 2013.

The fifth-starting Fuller made the winning pass as McCreadie, also of Watertown, struggled to clear traffic on lap 24 of the 50-lap race. McCreadie recovered to pressure Fuller through the closing stages of the caution-free event, but Fuller turned back each of McCreadie's challenges to earn $10,050 for the 14th WoO victory of his career.

"To be honest, I really don't even think of this place as one of my better tracks," said Fuller, who recently returned to full-time WoO competition after running roughly half of the national tour's races through the first half of the season. "It's not really my style of track, but for whatever reason we run good here. I guess there's something about the track that clicks with me, but I really can't tell you what it is."

Fuller's Clements-powered Kennedy Motorsports Rocket Chassis crossed the finish line 0.910 seconds ahead of McCreadie, who settled for second after leading the race's first 24 laps from the outside of the front row. Polesitter Brady Smith of Solon Springs, Wis., finished third with third-starting Shane Clanton of Zebulon, Ga., placing fourth. WoO points leader Darrell Lanigan of Union, Ky., improved one position from his sixth starting spot to round out the race's top five finishers.

Fuller put himself in contention early with a charge to third on the race's opening lap. He pulling away from an early back-and-forth battle with Jimmy Mars of Menomonie, Wis., Fuller began to pressure Smith for the second spot just after lap 10 as both he and Smith closed in on McCreadie in traffic.

As McCreadie struggled to find a way around the slower cars of Lance Matthees and Jordan Yaggy, Fuller took advantage to drive around both McCreadie and Yaggy to take the lead in a three-wide, race-winning move on lap 24.

Fuller opened a slight advantage after moving out front and used several slide jobs to clear traffic without opening the door for McCreadie.

"Timmy got hung on the bottom and I wasn't leaving the top," said Fuller, who survived a lap-33 scrape with Clint Smith while attempting to put him a lap down. "We had to slide lapped cars because everybody wanted to stay on the top. But we managed it and got through those guys like we needed to.

"This thing looked like it had been through a demolition derby anyway, so I didn't care if I wrinkled up a quarter-panel. You just had to be rude every now and then and take it."

Fuller's lap-33 contact with Clint Smith allowed McCreadie to close the gap. McCreadie kept pace with Fuller the rest of the way, but Fuller's aggressive handling of traffic prevented McCreadie from making a serious bid for the lead.

"I just never really had a chance," said McCreadie, who scored his third top-three finish in the past four WoO events. "We didn't get as many guys running side by side like they were early in the race. They all went to the cushion and left room where he could slide 'em. Early when I was stuck there behind them, they're running double file and there was no room to slide them.

"He did a good job. He knew what to do. When he got by me, he didn't mess around with anybody. He did it the way I should've done it, which was lay a fender on them. I was just being too nice to everybody and should've been more aggressive."

Mars faded to sixth at the finish after running as high as third early in the race. Rick Eckert or York, Pa., was seventh with Eric Wells of Hazard, Ky., eighth. After going to a backup car following hot laps, Chub Frank of Bear Lake, Pa., advanced from 18th to ninth in the main event with rookie contender Chase Junghans of Manhattan, Kan., rounding out the top 10 finishers.