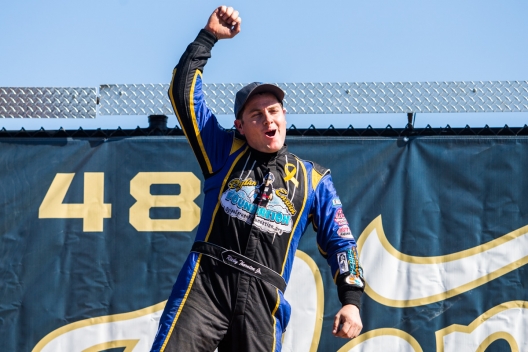 “It’s definitely up there in the top,” Thornton said of his victory. “Especially at a place like this. It’s just so huge. I’ve just got to thank Hudson O’Neal for letting me get in his car. Without him, we wouldn’t be here.”

Running second in his heat race and redrawing to start on the pole, Thornton shot to the lead at the drop of the green flag, successfully navigating mid-race lapped traffic to outrun fellow front-row starter Tim McCreadie of Watertown, N.Y. Filling the seat left vacant by the sidelined Hudson O’Neal of Martinsville, Ind., the modified ace earned a $10,000 payday.

“I felt pretty good through the middle there in (turns) three and four,” Thornton said. “But then I didn’t realize I had to get slow low getting into (turn) one. Luckily, I had (crewman) T.C. up there kind of giving me signals, kind of calming me down a little bit. Heck yeah.”

McCreadie finished runner-up, with Jimmy Owens of Newport, Tenn., who won a World 100 preliminary feature back in September, running third. Fifth-starting Chase Junghans of Manhattan, Kan., finished fourth, with Shanon Buckingham of Morristown, Tenn., advancing from the 10th starting spot to round out the top five.

“We benefited from guys not going to tech, it put us up there,” McCreadie said of his front-row starting spot. “We’ve got to go to work. We were tilling rubber. We’ll take a second. I’ve got to get better on them starts. I wasn’t expecting that. I wasn’t expecting him to go when he did. It kind of caught the whole field off guard. But more power to him. I would have done the same thing.”

Falling back to third, McCreadie retook second from Owens on lap 15. Despite his runner-up finish, McCreadie said his team still had to go to work before Saturday’s World 100 finale.

“We’re going to go back and we’ll think about it a little bit,”McCreadie said. “We’ll be alright. It was my call to make the one we did. We try to bounce between two or third setups and try to figure out which one is the best. So we sacrificed a little. Hopefully it will pay off later on tonight.”

Running second early, Owens was able to close the gap between himself and Thornton in lapped traffic. But he dropped back to finish third at the checkered flag.

“We ran good in the heat, ran pretty good in the feature there,” Owens said. “The track kind of locked down there toward the end but its been a great track considering the weather and the circumstances. I’ve got to thank my team and Ramierez Motorsports and all those guys for putting us in a good hot rod this weekend.”

Polesitter Jeep Van Wormer nearly got into the turn-four wall on the opening lap but still managed to edge ahead of second-starting Frank Heckenast Jr. to take an early lead. With the top-two cars distancing themselves from the field on the fifth lap, it was a tight battle for fourth between Curtis Robert and Joey Coulter. Maintaining his lead in the final laps, Van Wormer won the consolation, with Heckenast finishing runner-up. Gordy Gundaker ran third, with Coulter outdueling Roberts to take the fourth and final transfer spot.

Polesitter Kyle Bronson charged to the lead at the drop of the green flag, with Scott Bloomquist moving into a transfer spot on the second lap after starting at the tail of the field. It was a three-car battle for second on the four lap, with Greg Johnson maintaining the advantage. Bronson continued to lead at the halfway mark, with Bloomquist overtaking Johnson for second. Rolling around the bottom of the track, Bloomquist been reeling in Bronson on the ninth lap but the lapped car of Rob Anderzack slowed his momentum. Bronson won the consolation, with Bloomquist finishing second. Fifth-starting Jimmy Mars ran third, with Dennis Erb Jr. finishing fourth to transfer to the feature.

Shooting ahead out of turns one and two, third-starting Jimmy Owens edged ahead of Ricky Thornton Jr. to take an early lead. At the halfway mark, a three-car battle for the fourth-place spot ensued between Tyler Erb, Frank Heckenast Jr. and Colten Burdette. Stretching his lead to nearly a full straightaway late-race, Owens won the heat, with Thornton finishing second. Darrell Lanigan ran third, with Erb holding off Heckenast to finish fourth and transfer to the feature.

Polesitter Chase Junghans led the opening lap, with fourth-starting Scott James shooting to second in a single circuit. A yellow flag waved on lap one when Jerry Bowersock got into the frontstretch wall, slowing to a stop in turn one. Junghans maintained his lead on the restart, with Brian Shirley and Jeep Van Wormer battling for fourth on the fourth lap. Rolling around the bottom of the racetrack, James pulled alongside Junghans at the line on lap six but was unable to make the pass for the lead. Junghans won the heat, with James finishing runner-up. Kent Robinson ran third, with Shirley taking the fourth and final transfer spot.

Polesitter Brandon Overton edged ahead of fellow front-row starter Billy Moyer to lead the opening lap, with sixth-starting Tim McCreadie taking it three-wide with Scott Bloomquist and Shanon Buckingham for third on lap four. Overton stretched his lead at the halfway mark, with third-running Bloomquist closing the gap between himself and Moyer. Overton won the head, with Moyer finishing second. Bloomquist ran third, with McCreadie finishing fourth to transfer to the feature.

Moyer and Bloomquist were disqualified for failing to go through post-race tech, forfeiting their feature transfer spots.

Polesitter Devin Gilpin shot to an early lead, with Kyle Bronson sliding ahead of second-starting Mason Zeigler to take second on the opening lap. Gilpin maintained a comfortable lead at the halfway point, as Zeigler began reeling in second-running Bronson. Zeigler slid ahead of Bronson in turn two on the eighth lap, with Bronson getting into the turn-two wall to lose another position to Nick Hoffman. Unchallenged through the entire 10-lap distance, Gilpin won the heat, with Zeigler finishing second. Hoffman and Chris Ferguson grabbed the final two feature transfer spots.

A 78-car field is signed in for Saturday’s postponed preliminary program, which began virtually right on schedule with hot laps at 10:30 a.m. Eight heat races plus B-mains and two 25-lap, $10,000-to-win features are on the agenda. … The rain that washed out Friday night’s program continued through the overnight hours; at one point the temperature dipped low enough that snow actually fell over the speedway for a short period. Teams and campers awoke Saturday morning to chilly temps in the high 30s, but sun began breaking through shortly before the start of practice and skies are forecast to remain clear throughout the day with highs climbing into the low 50s. … Seven haulers were parked outside the track in the upper pit area on Friday, but Eldora officials moved all of them into the infield which will help hasten the alignment of the Saturday’s races. … The track surface was extremely quick during hot laps with Josh Richards of Shinnston, W.Va., topping the speed charts at 14.899 seconds, putting him just a tick off the track record. Kent Robinson of Bloomington, Ind., also broke into the 14-second bracket with a circuit of 14.998 seconds. … Officials plan to run off the afternoon preliminary action and then immediately begin clearing the grandstands and sweeping the pits while track crews work on track maintenance to prepare for the evening’s World 100 finale. Heat races are scheduled to begin at 7 p.m.

Friday night’s World 100 preliminary program at Eldora Speedway in Rossburg, Ohio, was postponed by rain that arrived during the drivers’ meeting, setting up a doubleheader on Saturday.

Officials will open the track’s gates on Saturday at 10 a.m. and begin hot laps at 10:30 a.m. for Friday’s program, which will include eight heats and four consolations to set the fields for the pair of 25-lap, $10,000-to-win preliminary features. The stands will be cleared following the completion of the afternoon action and then the evening card that features heats, consolations, scrambles and the 48th annual World 100 finale will be run as scheduled.

A total of 77 cars went through inspection on Friday afternoon for the restart of the World 100 weekend, which was stopped on its original Sept. 6-8 date by rain that set in following the completion of the first preliminary program on Thursday night.

Those who purchased a pay-per-view video package for Friday’s program will receive access to watch when it is made up starting Saturday morning.