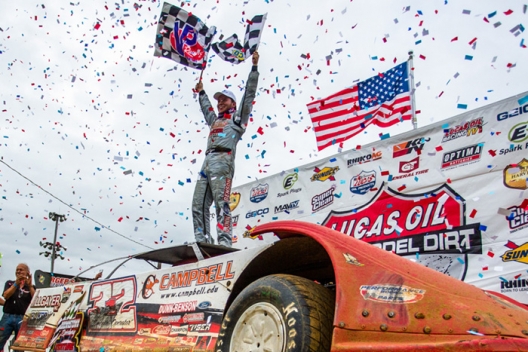 Charging from the 19th starting spot, Bobby Pierce of Oakwood, Ill., regained the lead from sixth-starting Jonathan Davenport of Blairsville, Ga., on lap 99, edging ahead of the former race winner at the checkered flag to earn a $20,000 payday in his third Lucas Oil Late Model Dirt Series victory of the season.

“Of all the places to win a big race at this year, I didn’t think it’d come here,” Pierce said in victory lane. “The focus it takes to run here … it’s so slick here. Even if (Davenport) won, I think I’d still be pretty pumped. That was so fun. He ran a heck of a race and so did (Tim McCreadie). We all raced each other clean.

“It’s a lot of feelings right now. It’s been a long year. Getting these wins, we’ve been so close so many times. To finally get it … this is our third win of the year but our first big one. We’ve been so close.”

Rolling around the inside groove, Pierce worked his way through the field, overtaking Davenport for the first time on lap 73. Falling back to second just four laps later, Pierce fought back challenges from third-running Tim McCreadie of Watertown, N.Y., to stay within striking distance of race leader. As the frontrunners worked their way through late-race lapped traffic, Pierce closed in on Davenport, pulling ahead on the final lap to score his first career Jackson 100 victory.

“I’ve got to give most of the credit for this race to my dad and (crewman) Danny (Myers) making a call,” Pierce said. “I didn’t think it’d work but it did. … I didn’t think we’d be able to stick with them. But the long runs, I was almost better. So it worked out.”

Davenport finished a narrow runner-up, with McCreadie notching a third-place finish after leading laps 18-59. Rallying from the 21st starting spot, Knoxville Nationals winner Jimmy Owens of Newport, Tenn., ran fourth, with Darrell Lanigan of Union, Ky., advancing from the 14th starting position to round out the top five.

“They always say things come back around,” Davenport said. “(Pierce) gave me $53,000 back earlier this year. He did a hell of a job. I didn’t give it to him. I knew I was in trouble on that last take-off because I went down the front straightaway and I just didn’t feel any grip in my rear tire. I think I let them cool off a little too much. But from where we started the weekend … we started seventh in our heat, so we came to the front. Hats off to my crew. They’ve been working hard.”

It was outside polesitter Mason Zeigler of Chalk Hill, Pa., charging to the front of the field at the drop of the green flag, relinquishing his lead to fourth-starting McCreadie on lap 18 as the pair worked their way through lapped traffic. McCreadie maintained his lead at the halfway mark but a strong of late-race cautions eventually slowed his momentum.

Using a lap-59 restart to his advantage, Davenport rolled around the outside in turns one and two, shooting ahead down the backstretch to assume the point on lap 60. Fighting back challenges from Pierce, Davenport lost the lead to the the Dunn-Benson Motorsports pilot briefly on laps 73-76, powering back to the front of the field on lap 77. But as the pair raced door-to-door in the final laps, it was Pierce nosing ahead at the checkers.

“What a Sunday race,” Davenport said. “McCreadie might have won it if he hadn’t tried to block (Pierce) on that one restart. We got the run around the outside. But I don’t know. Pierce was awful good. They’ve had a lot of bad luck this year, so it was definitely their time.”

McCreadie admitted that his move to the bottom groove opened the door for Davenport and Pierce to get around him. But after a couple of off weeks, he was pleased with a solid Sunday performance.

“But congrats to Bobby and Jonathan. We’re happy to be competitive. It’s hard. We’re doing it harder than anybody that travels in the pit area. At least we’re up here having fun.”

Notes: Pierce scored his third Lucas Oil Series victory of 2018, his first the tour stop at Macon (Ill.) Speedway on April 28. … Mason Zeigler led the first 17 laps before retiring his smoking car to the pits under a mid-race caution. … Tim McCreadie led laps 18-59; Jonathan Davenport led laps 60-72 and 77-98; Pierce led 73-76 and 99-100. … The race was slowed by eight cautions. … The first yellow flag waved on lap 21 when Dennis Erb Jr. slipped off the track in turn four. A second caution fell on the following circuit for debris on the racetrack. … Jason Jameson slid over the berm in turns one and two to draw a caution on lap 43. … A yellow flag flew on lap 52 when Devin Gilpin spun in turns three and four. … Josh Richards stopped in turn four to draw a lap-59 caution. … A yellow flag waved on lap 65 when Scott Bloomquist slowed off the pace. … Don O’Neal spun in turn two to draw a caution on lap 70. … The final yellow flag flew on lap 81 when Gregg Satterlee spun in turns three and four. … O’Neal was the winner of Friday’s $2,000-to-win Bowman 50 for Crate Late Models.

Greg Johnson of Bedford, Ind., has scratched from the remainder of the afternoon’s program after rolling his car in turns three and four in the fourth heat race. … Adam Bowman of Seymour, Ind., suffered front suspension problems in his heat race, shooting off the track and coming to a stop outside the turn three berm. … Zak Blackwood of Columbus, Ind., was running in a transfer spot in his heat race when he spun in turns three and four, spewing water after overheating. … Ricky Thornton Jr. of Chandler, Ariz., and Colton Burdette of Parkersburg, W.Va., are among drivers making their first-ever Jackson 100 start. Thornton is filling in for the injured Hudson O'Neal of Martinsville, Ind., who is pit reporting for DirtonDirt.com's live pay-per-view broadcast. ... Burdette was the winner of last Saturday's $5,000-to-win Gibby's King Championship at Ohio Valley Speedway in Lubeck, W.Va. … Among former Jackson 100 winners transferring to Sunday's feature through heat races are Tim McCreadie of Watertown, N.Y., Don O'Neal of Martinsville, Ind., Scott Bloomquist of Mooresburg, Tenn., and Jonathan Davenport of Blairsville, Ga.