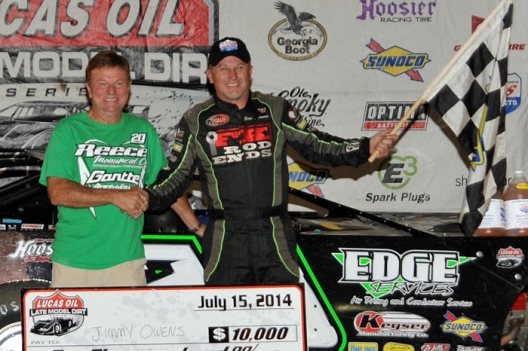 KANSAS CITY, Kan. (July 15) — The mid-summer hot streak of Jimmy Owens continues, even if he had his hands full with a tricky racetrack.

The three-time and reigning Lucas Oil Late Model Dirt Series champion from Newport, Tenn., grabbed his seventh series victory of the season, and fourth in the last six races, to extend his series points lead Tuesday in pocketing $10,000 at Lakeside Speedway’s Clash of the Titans.

“Cleaning this confetti off your car never gets old,” Owens said in victory lane after his series-leading 51st career victory.

Polesitter Scott Bloomquist of Mooresburg, Tenn., led the first 18 laps in trying to grab a victory in his first visit to the half-mile oval, but Owens swept around impressively exiting turn four on the 19th lap and never looked back in the caution-free 50-lap main event.

Owens lapped all but seven competitors in dominating the racing and taking the checkers more than a half-track margin ahead of Lakeside veteran and ninth-starting Terry Phillips of Springfield, Mo., who grabbed the second spot from Bloomquist with six laps remaining.

Bloomquist settled for third while Brandon Overton of Appling, Ga., another driver making his Lakeside debut, and Don O’Neal of Martinsville, Ind., rounded out the top five.

Owens immediately jumped into second from his third starting spot, and crossed the start-finish line in nearly a dead heat with Bloomquist on the sixth lap. Bloomquist edged back away from another dozen laps, but Owens blew by Bloomquist at the top of the frontstretch.

Owens car must’ve felt great, right? Not so much, the winner said.

“No, no, this track, them patchy spots and all that stuff, you feel like you’ve got a God-awful terrible car and you’re just fighting to hang on, because you can’t make two (consecutive good) laps,” Owens said. “But we was able to pull it off and come home with a win. This race car’s pretty awesome right now.”

Owens compared Lakeside’s surface to Knoxville (Iowa) Speedway, “because the brown spots have so much traction. So you’ll hook up, and next thing you know it’ll lift the front end up and the tires up, and the next thing you know you’re sliding and gotta back off before you hit the wall. It’ll definitely work up a sweat up there.

“We had an awesome car tonight. I just knew Scott was on my tail and I was running it for everything she had every lap.”

Phillips was turning some of the best lap times of the night in the second half of the race, but he was so far behind Owens he never got a glimpse of the leader. Did he think a caution would help?

“Yeah, until the race was over and I couldn’t even see Jimmy,” Phillips said with a laugh. “So it probably wouldn’t have mattered.”

Phillips, looking for his second career Lucas Oil victory to follow up his Topless 100 in Batesville, Ark., last season, was pleased with a solid run against the national traveling teams.

“We’re getting better in these cars,” said Phillips, who switched to Rocket Chassis in the off-season. “I love coming to Lakeside. We were just talking about that, even if it’s got some holes, that gives it character and makes it race even better, I think. It’s just a good 'ol racetrack, and I’m glad to come up here. The old hot road wasn’t bad … I guess I was meant to finish second tonight.”

Bloomquist, coming off back-to-back runner-up finishes on the weekend, was disgusted by suspension issues that made his car a handful to drive.

“We just had something happen under the car. Because it’s a sponsor, I’m not going to mention it,” Bloomquist said. “But, yeah, we fired off good, the car felt really good. I think anybody could see the car was just jumping around and bouncing around.

“It just turned into something real uneasy to drive. You know, at least we hung in there and got third, but it was definitely not what we were looking for … We’ll just work on it and get it better next time.”

The series continues its Midwest swing this weekend with the July 18-19 Silver Dollar Nationals at I-80 Speedway in Greenwood, Neb., for a $30,000-to-win event, the richest dirt race in Nebraska.

Notes: Eddie Carrier Jr. of Salt Rock, W.Va., started outside the front row but never contended up front. … Fourth-starting Jared Landers of Batesville, Ark., slipped in turn three on the second lap to fall back to sixth and ended up a lap down in ninth. … Jason Feger of Bloomington, Ill., started 11th and finished seventh. … Texan Rodney Sanders, who finished 10th in the Late Model feature, won the preceding United States Modified Touring Series 35-lapper at Lakeside over fellow double-duty driver Terry Phillips. … Will Vaught broke a driveshaft leading a consolation race. He received one of the fast-time provisional starting spots but retired before the halfway point of the feature, finishing 23rd.