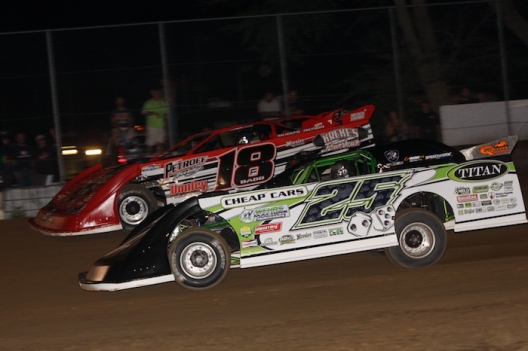 DANVILLE, Ill. (July 13) — Racers are renowned for complaining about a car that’s too tight, too loose or too slow or a track that’s too fast, too rough or too dry.

It doesn’t happen much, but Shannon Babb of Moweaqua, Ill., had one of those nights where everything seemed just right Sunday on the UMP DIRTcar Summernationals at Vermilion County Speedway.

Starting outside the front row in a car his crew never touched all night, Babb went virtually unchallenged for 40 laps, building leads of three seconds or more in cruising to his fourth series victory of the season and stretching his points lead in the chase for the $25,000 title.

The car was really comfortable on the car tonight; we never changed nothing on the thing all night long. It was good all night,” Babb said. “There’s probably one out of the whole year that that happens.”

Babb pocketed $5,000 and earned his 87th career Summernationals victory, second on the all-time list behind Billy Moyer of Batesville, Ark., who won the last two series races but wasn’t entered at Vermilion County.

Babb’s closest pursuer in the points, Ryan Unzicker of El Paso, Ill., recovered from a lap-four flat tire to finish a lap down in seventh. Unzicker was 14 points behind entering the race and will head into the final four races about 40 points in arrears.

Bobby Pierce of Oakwood, Ill., started seventh and took third from Daren Friedman of Forrest, Ill., on the eighth lap. He held the third spot through the 31st lap when a wire came loose on his MSD box, disabling the car’s ignition.

Feger wasn’t too far behind Babb when the race’s lone caution appeared for Unzicker’s right-rear flat, but Babb progressively pulled away and never let Feger get too close even amid traffic. Babb lapped Unzicker near the halfway point and had a three-second lead with 10 laps remaining in the 40-lapper.

The racing was preceded by hours and hours of work to get the track in shape after heavy overnight rains left the event in doubt. But tireless work on the track — including rewatering it before the night’s heat races — provided a surface that was racy but not rough.

The series takes two days off before the Ohio swing wraps up the series starting Wednesday at Atomic Speedway for the first-ever tour event at the 3/8-mile oval near Chillicothe, Ohio.

Polesitter and series points leader Shannon Babb cruised to a victory in the second 10-lap heat. Third-starting Daren Friedman was second followed by Brian Shirley and Brandon Sheppard. A lap-one caution appeared when Tanner English slipped over the turn-four banking and came to a stop; he had to restart on the tail. John Gardner Jr. pulled to the infield on the seventh lap but didn't draw a yellow.

On a fast track with little passing, polesitter Jason Feger built a straightaway lead by halfway and fought off a challenge from Ryan Unzicker on a late restart for a 10-lap victory. MIke Spatola was third followed by Bobby Pierce and Jar Morris. Torin Mettille spun in turn two to draw a lap-eight caution.

Jason Feger of Bloomington, Ill., grabbed his first fast qualifying time on the series Sunday at Vermilion County. He tripped the clock in 13.585 seconds at the quarter-mile oval and he’ll start on the pole of the first heat race. The second-heat polesitter will be series points leader Shannon Babb of Moweaqua, Ill. All cars will transfer to the main event from both heats.

Vermilion County hosts the last points event on the series before the tour heads to its four-race Ohio swing next week. There are 18 cars entered, the second-lowest total on the series to Terre Haute’s 15.

Shannon Babb of Moweaqua, Ill., continues to lead the points, but his margin is down to 14 points after engine problems forced him to retire early from Saturday’s event at 34 Raceway in West Burlington, Iowa. Ryan Unzicker cut the points lead in half with his sixth-place run in pursuit of the $25,000 championship.

With Brian Shirley of Chatham, Ill., lasting just seven laps at 34 Raceway, the title chase has filtered down to two drivers on the grueling tour.

The field has been split into two groups for time trials and heat races, and everyone will transfer to the 40-lap feature.

Overnight rains soaked the track, and officials posted a request earlier today on Facebook to draw anyone wanting to help pack the track. By early afternoon, it was announced all systems go, and the top layer of the track has been pushed to the infield. Pack trucks were still on the track at the 6:30 scheduled time for hot laps. ... Billy Moyer of Batesville, Ark., won four straight series starts through Saturday’s event at 34 Raceway, giving him a series-leading 88 career victories, but he’s not entered at Danville. … Shannon Babb needs two victories to tie Moyer’s mark. … Babb won last year’s visit to Vermilion County in a thrilling battle with Bobby Pierce. ... Torin Mettile damaged his car's front bumper in hot laps. ... Tanner English detected a broken rocker arm while awaiting his turn for hot laps; he was able to find a replacement and make it out for qualifying.