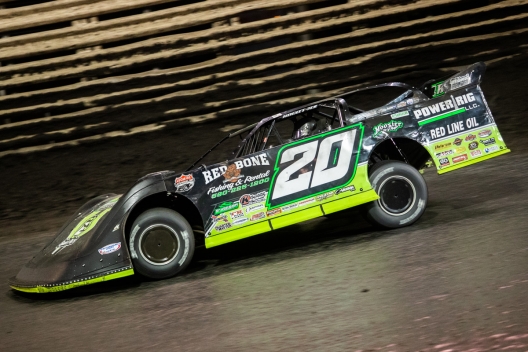 KNOXVILLE, Iowa (Sept. 15) — Jimmy Owens of Newport, Tenn., came close to scoring his first Lucas Oil Late Model Knoxville Nationals victory a few years ago, leading laps at the historic Knoxville Raceway only to come up short of a win in the crown jewel event.

But the stars aligned for Owens on Saturday night, with the three-time Lucas Oil Late Model Dirt Series champion finally making the trip to Knoxville’s victory lane. Overtaking Brandon Sheppard of New Berlin, Ill., Owens held off a charging Bobby Pierce of Oakwood, Ill., pulling away late-race to earn a $40,000 payday in the 15th annual event.

“Everybody has their ups and downs,” Owens said in victory lane. “We lost this race several years ago. Scott (Bloomquist) and I were talking about it in the lineup shoot there. They gave the five to go and I was like, “Man, don’t hit no cushion. Don’t hit no rocks. Maybe we won’t get to lapped traffic and we’ll be alright.’”

Gaining momentum from a lap 38-restart, Owens slid ahead of Sheppard in turns one and two, powering ahead out of turns three and four to assume the point on lap 41 of 100. Stretching his lead to almost a full straightaway mid-race, Owens entered lapped traffic on lap 75, opening the door for the charging Pierce.

The pair crossed the line door-to-door on the 80th circuit, with Pierce slipping over the berm in turn two one lap later to lose his momentum. With the race’s final caution falling on lap 88 when Pierce and Don O’Neal of Martinsville, Ind., made contact battling for second, Owens sailed over the field in the final laps to capture his first Knoxville Nationals victory.

“We had a good car,” Owens said. “The lapped guys were in front of us and I knew they were going to close in on us. I was expecting some sort of pass. I was hoping I didn’t get passed or nothing. It’s so hard to maneuver through that traffic because the track was really good tonight. When they’re three- and four-wide in front of you, it’s just hard to go anywhere.”

O’Neal finished runner-up, with Josh Richards of Shinnston, W.Va., rallying from the 21st starting spot to run third. After running as high as second, Scott Bloomquist of Mooresburg, Tenn., finished fourth, with Brian Shirley of Chatham, Ill., charging from the 28th starting position to round out the top five.

After running second early and slipping back to fourth, late-race restarts worked to O’Neal’s advantage. Battling Pierce for position with 20 laps remaining in the distance, the pair collided exiting turn four, resulting in Pierce spinning on the frontstretch. Never stopping, O’Neal was able to continue, holding off Richards to finish second at the checkered flag.

“We’d fall back a spot or two and then get a spot on the restart,” O’Neal said. “We’ve been struggling a little bit and sure would’ve liked to win this thing. But we’ll take second. We’ve had a little bad luck and have been off a few times. We’re getting things turned around a little bit and tonight sure helps the moral of the team.”

Struggling in Thursday and Friday’s preliminaries, Richards rebounded with his third-place finish. The Best Performance Motorsports driver, who has finished runner-up in the Knoxville Nationals several times, was in good spirits after the race.

“I had a blast out there,” Richards said. “We had some problems yesterday that put us behind. We think we could have gained some points last night and started further ahead. … I think we were a little bit better than Don (O’Neal) there at the end, I just couldn’t quite squeeze by. We just had a fun race there. I’m glad I didn’t run second for the fifth time. Third’s not too bad.”

After leading some of the year’s biggest events and fighting bad luck, Owens was unable to hide his excitement in victory lane.

“I hope (car owner) Leon (Ramirez) and them was watching, because man they’ve been cheering me on and cheering me on,” Owens said. “They’ve had as much heartbreak as we have. It’s awesome to get this win. I’ve just got to thank my crew and everybody for just busting their butts.”

Lap 88: Pierce and O'Neal make contact while battling for second, with Pierce spinning on the frontstretch. O'Neal was able to continue, with Pierce heading to the hot pit.

Lap 80: Owens and Pierce cross the line side-by-side, with Pierce getting into the cushion exiting turn two to slow his charge for the lead.

Lap 75: As the frontrunners work their way through lapped traffic, Pierce has closed the gap between himself and Owens.

Lap 69: Pierce and Bloomquist trade the second-place spot, as Sheppard and O'Neal battle for fourth.

Lap 60: Owens stretches his lead to almost a full straigtaway over second-running Bloomquist.

Lap 56: A yellow flag waves when Shane Clanton slowed on the backstretch.

Lap 55: Kyle Bronson, Tim McCreadie and Gregg Satterlee tangle on the backstretch to draw a caution. Owens continues to lead as Pierce, Sheppard and Bloomquist battled for third.

Lap 51: A yellow flag waves when Jimmy Mars slows off the pace. Owens was holding off a charging Pierce when the caution fell.

Lap 41: A red flag falls when Jared Landers gets sideways on the frontstretch, sustaining heavy damage to his car.

Lap 41: Gaining mometum on the restart, Owens slides ahead of Sheppard in turns one and two to take the lead.

Lap 38: Chris Simpson slows on the backstretch to draw a caution. Charging from the 22nd starting spot, Bobby Pierce is up to sixth.

Lap 22: Cars slow to a stop on the frontstretch for a fuel stop.

Lap 22: Just as Bloomquist was closing in on Sheppard, Mason Zeigler slows in turn four to draw a caution after making contact with Jimmy Mars.

Lap seven: A smoking Brian Birkhofer retires to the infield, as Sheppard pulls ahead of Pearson to take the lead.

Lap one: Outside poleitter Earl Pearson Jr. edges ahead of Brandon Sheppard out of turn four to lead the opening lap.

9:11 p.m.: Feature cars have made their way to the frontstretch and driver introductions are under way.

Edging ahead of fellow front-row starter Jeremiah Hurst out of turn four, outside polesitter Brian Shirley led the opening lap, with Hurst shooting back to the front of the field on the following circuit. As Jared Landers challenged Shirley for second on the fourth lap, it was Ricky Thornton Jr. on the move early, charging from 13th to run in fourth. Hurst and Shirley raced door-to-door for the lead, with Shirley retaking the position on lap six. Thornton continued his charge at the halfway mark, setting his sights on Shirley. A yellow flag wave on lap 12 when Brent Larson slowed off the pace down the backstretch. Austin Retting got into the wall in turns one and two to draw a caution on the ensuing restart. Shirley held his lead on the restart, as C-main winner Scott James challenged Darrell Lanigan for the final transfer spot. Thornton edged ahead of Shirley to lead lap 16, with a yellow flag waving for Matt Furman, who’s car came to a stop in the bottom of turn four. Shirley lost the second-place spot to Landers on the restart, with Lanigan rolling around the top side to battle fifth-running Dennis Erb Jr. Pulling away late-race, Thornton won the consolation, with Landers and Erb rounding out the podium.

Pulling ahead of polesitter Scott James down the backstretch, second-starting Gregg Satterlee took an early lead. James began closing back in on the race leader on the third circuit, charging ahead out of turn four to lead lap four. Satterlee kept pace with James at the halfway mark, with Justin Zeitner reeling in the frontrunners before slipping over the cushion in turns one and two on lap nine. A yellow flag waved on lap 10 when Zeitner slowed on the backstretch with a flat tire. Morgan Bagley used the restart to his advantage, edging ahead of James at the line to take the lead on lap 11. The pair raced side-by-side, with James regaining the lead on the following circuit. Bagley nosed back ahead to lead lap 13, with James rolling around the top side to win the C-main on the final lap.

The Knoxville Nationals concludes with one more truly gorgeous, end-of-summer day: partly sunny skies with a high temperature nearing 90. … Lucas Oil Series director Rick Schwallie said during Saturday’s drivers’ meeting that a fuel stop will be utilized during the 100-lapper for the second consecutive year. Officials will display a red flag on the first caution flag that flies between laps 20-40; if that stretch runs uninterrupted, the fuel stop will occur at lap 40. Two crew members will be permitted onto the homestretch to pour in 10 gallons of fuel and provide their driver a helmet change if necessary during the five-minute stoppage. … Two-time Nationals winner Scott Bloomquist of Mooresburg, Tenn., retired from Friday’s preliminary feature during a lap-one caution period while running eighth due to engine problems that resulted in a lost cylinder. He will start third in the 100-lapper, but his crew had to install a backup powerplant for Saturday’s action. … Chase Junghans of Manhattan, Kan., had his car sidelined by terminal engine trouble as he headed out for his heat on Friday, but his Thursday performance locked him into the 20th starting spot in the 100. Without a backup motor along — the second XR1 Rocket car in his trailer was without an engine because he had already made a deal to sell it to Brian Shirley of Chatham, Ill. — Junghans had to make arrangements for a friend, Dustin Johnson, back in Kansas to retrieve a car and engine from the team’s shop and haul it up to Knoxville today. … Frank Heckenast Jr. of Frankfort, Ill., starts eighth in the 100-lapper after his runner-up finish in Friday’s feature made him the lone driver to place among the top five in both preliminary A-mains. He’s making his sixth career Nationals finale start but first since 2015. … Josh Richards of Shinnston, W.Va., who owns four career runner-up finishes in the Nationals 100-lapper and last year was in contention until experiencing late-race heartbreak, starts 21st despite retiring early from Friday’s feature. Electrical problems caused his Best Performance Motorsports machine to stumble; his crew replaced the entire electrical system in hopes that the trouble will be corrected. … Chris Simpson of Oxford, Iowa, missed transferring through his Friday heat by just one spot, but he scratched from the B-main and fell back on his Thursday points to secure the 10th starting spot in the 100-lapper. He said his car was running hot in the heat so he decided to save his equipment and change the machine’s radiator for Saturday’s program. … Jesse Stovall of Billings, Mo., appeared primed for a top-10 finish in Friday’s feature until a broken rearend plate and driveshaft forced him out of the race. … Drivers who have scratched from Saturday’s competition include Zach McMillan of Gladewater, Texas, whose car was heavily damaged in a Friday B-main accident; Jonathan Brauns of Muscatine, Iowa; and Joel Callahan of Dubuque, Iowa.

A total of 24 cars are already locked into Saturday’s feature based on preliminary performances. The top four cars from the night’s C-main will transfer to the B-main, with the top six B-main finishers transferring to the 100-lapper. Lucas Oil Series provisionals will make up the final row of the feature lineup.