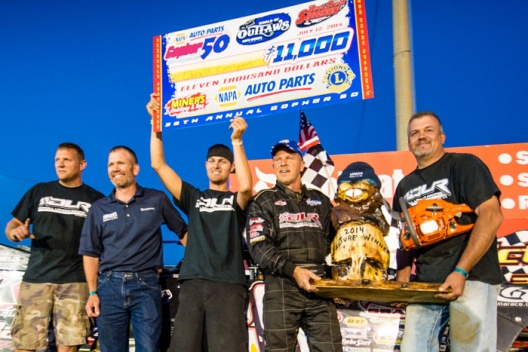 Lanigan, the two-time WoO champion and current series points leader, advanced from his fourth starting spot and drove his Gotta Race-sponsored Club 29 Race Car by polesitter Morgan Bagley of Tyler, Texas, on lap 23 of the 50-lap event on his way to winning Minnesota’s biggest Late Model race for the second straight year.

Lanigan crossed the finish line 1.319 seconds ahead of Bagley, who settled for the runner-up finish after leading laps 4-22. Fifth-starting Tim Fuller of Watertown, N.Y., was just behind Bagley in third, while second-starting Rick Eckert of York, Pa., slid back to fourth after leading the race’s first three laps. Eighth-starting Eric Wells of Hazard, Ky., rounded out the top five after running as high as third midway through the race.

Lanigan’s 61st career WoO victory came in the second leg of the series’s four-race Wild West Tour and helped to ease the disappointment of a missed opportunity in the Wild West Tour opener Thursday night at Hibbing (Minn.) Raceway when Lanigan fell to third after leading the first half of the race.

“We definitely let one get away the other night,” said Lanigan, who stretched his WoO LMS points lead to an even 200 points with the victory. “That was our own fault. But we’re having a great year, so I ain’t complaining.

“The car was great tonight; we could go anywhere we wanted to. Went a little harder than they did on tires, and I think it paid off in the end.”

Looking for his first career WoO LMS victory, Bagley topped an early battle with Eckert to put his P&W Sales-sponsored Rocket Chassis out front on lap four. He fought hard to turn back Lanigan’s challenge around the 20-lap mark but couldn’t hold him off after the two leaders raced side-by-side through traffic for three laps.

Bagley mounted a challenge to retake the lead just after the halfway point and even pulled alongside Lanigan on lap 27. But a lap-29 caution slowed Bagley’s momentum, and Lanigan pulled away after the restart.

“It was good to get out and lead some laps and be competitive,” said Bagley, who recorded his career best WoO LMS A-Main finish and his second consecutive top five on the series. “It was a good race. I just zigged when I should’ve zagged there. I knew it was gonna be hard to beat Darrell regardless. But at least I got to follow him and drive hard. Maybe we'll have something for him next time.

“We’ve been paying our dues and that’s part of it. We’re just gonna keep on digging and fine tuning. We’ve got a good team and hopefully (a victory) will come here pretty quick because everybody on this team deserves it.”

Fuller continued his recent resurgence in his Kennedy Motorsports Rocket Chassis with a solid performance that began with lowering Deer Creek’s Late Model track record in qualifying. After settling into fifth early in the main event, he later took third in a heated mid-race battle with Eckert and Wells, but he couldn't catch the leaders in the closing laps.

"It was a real good night," said Fuller, who plans to follow the remainder of the WoO LMS schedule after missing much of the first half of the season. “We just weren’t as good as Darrell and (Bagley). We've been running good, and you hang around the top five long enough and you're gonna grab some wins.”

The race was slowed by three caution flags. The first caution was thrown on lap seven for John Winge of Sioux Falls, S.D.; Chub Frank of Bear Lake, Pa., drew a lap-24 caution when he slowed on the track; and the final yellow flew on lap 29 for Boom Briggs of Bear Lake, Pa.

Notes: Lanigan has won eight of 19 WoO features this season and went over the $150,000 mark in earnings. … Former Gopher 50 winner Tim McCreadie of Watertown, N.Y., was running eighth when he retired on lap 29 due to overheating. ... Jimmy Mars of Menomonie, Wis., who won the Wild West Tour opener on Thursday night at Hibbing, finished a quiet eighth. … The race was postponed by rain from its original Saturday-night date. … The WoO tour visited Deer Creek for the 10th consecutive year. … The WoO Wild West Tour continues Tues., July 15, with a visit to Brown County Speedway in Aberdeen, S.D., for the third-mile oval’s first WoO LMS event since 2008. River Cities Speedway in Grand Forks, N.D., hosts the Wild West Tour finale on Fri., July 18.