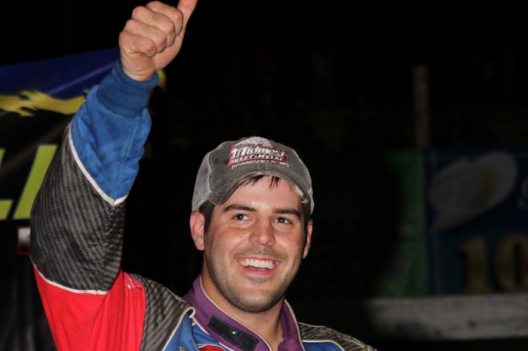 Coming off his third victory of the season at Kentucky Lake Motor Speedway in Calvert City, Ky., just a week earlier, the Batesville, Ark., native made an impressive debut at Richmond Raceway, notching a $10,000 victory in 27th annual Paul “Butterball” Wooldridge Memorial.

Moyer set an early tone for the evening in a dominating fashion, lowering the track record in time trials. Electing to forgo the polesitter challenge that offered the winner of the first heat race a $25,000 payoff to start from the tail of the 20-car field, Moyer led the 50-lap event flag-to-flag for his seventh victory overall of the season and fourth in Kentucky.

“It’s this race car,” Moyer said Saturday after his win. “It’s this Longhorn Race Car. My dad and Kevin (Rumley) and the whole (Bobby) Labonte crew … I wouldn’t be here without them. It’s as simple as that. I’ve never had a track record in my life … it’s the car. It’s awesome to drive. I work hard, but when you’ve got a car like this, it’s really, really nice.

“To set fast time, win a heat, lead every lap of the feature … it was awesome. There’s a lot of good cars here … Marlar, both the Neats, Chamberlain, Victor Lee, there’s guys that run really good around here.”

Fourth-starting Duane Chamberlain of Richmond, Ind., moved to the outside pole on the first restart after a turn-three spin sent second-starting Brad Neat of Dunnville, Ky., to the tail of the field. Chamberlain pressured Moyer in the green, but mid-race cautions never allowed him a chance to clear the race leader.

“We had a good car,” Chamberlain said after the race. “I went a little harder on tires than Billy did. The cautions just saved him, I feel like. Every time I’d get going, we’d have a caution. It’d take me a while to get going again. I ended up sealing my right-rear tire up. The cautions really hurt me. Congrats to him. He didn’t screw up, so I didn’t get by him.

“Everything was just clicking right on the car. The caution just ruined it for me. It was a good night. We’ll keep taking these seconds and thirds and getting more wins.”

Ben Adkins of West Portsmouth, Ohio, finished third, while Michael Chilton of Salvisa, Ky., bested Stephen Breeding of Isom, Ky., at the checkers for fourth. Breeding rounded out the top-five.

The race was slowed by five cautions. Neat drew a second yellow on lap 12 after spinning in turn one; Skylar Marlar of Winfield, Tenn, spun on the ensuing restart for a third caution. Dustin Neat of Dunnville, Ky., drew the fourth yellow on lap 22 when he slowed on the track. The final caution was thrown on lap 29 for Aaron Hatton of Mount Sterling, Ky., when he slowed on the backstretch.

Though he didn’t take an extra $15,000 back to Arkansas, Moyer still chalked the night up to a success at the oval promoted by Joey and Tiffany Tackett.

“The guy and lady that run this place do a heck of a job,” Moyer said. “It couldn’t have been much better. It was just an honor to win in front of that massive crowd.

“I told them I’d celebrate just as much for $10,000. I just wanted a trophy. That’s awesome. That’s what we came to do. Twenty-five would have been awesome, but it would have been hard.”

Notes: The winner's father also won $10,000 Saturday in the UMP DIRTcar Summernationals stop at 34 Raceway in West Burlington, Iowa. ... The event honors one of central Kentucky's most beloved drivers. … The Tacketts announced at the drivers' meeting that they will step down at the end of the season, though the track is expected to remain open under new promoters. ... The event boasted the biggest winner's purse to ever be paid at the raceway. ... The track's next Super Late Model event is scheduled for Aug. 23.