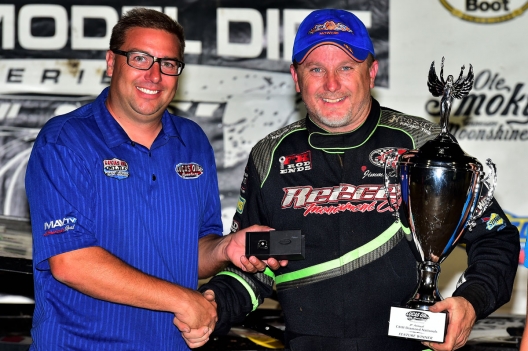 With his car owner Mike Reece looking on, Owens ran away from rival Scott Bloomquist of Mooresburg, Tenn., to capture the eighth annual CMH Diamond Nationals. It was the sixth Lucas Oil Late Model Dirt Series victory of the season and the 50th all time for Owens, who snapped a tie with Bloomquist atop the national tour’s career win list.

Starting third in the 50-lap feature co-sanctioned by the Lucas Oil Midwest LateModel Racing Association, Owens grabbed the lead from Earl Pearson Jr. of Jacksonville, Fla., on lap three but soon was under pressure from the fourth-starting Bloomquist. Bloomquist surged into the lead on lap 15, but Owens regained the top spot on lap 19 and never looked back.

In a race slowed by just a single caution flag — on lap four for a multi-car incident involving Jeremy Payne of Springfield, Mo., Jason Papich of Nipomo, Calif., and Jason Bodenhamer of Centerview, Mo. — Owens steered his Club 29 car away from Bloomquist to defeat the 50-year-old Dirt Late Model Hall of Famer by a commanding margin of 5.287 seconds.

Pearson settled for a third-place finish after starting from the pole position and Jesse Stovall of Billings, Mo., charged from the 16th starting spot to outduel O’Neal for fourth at the checkered flag.

“Man, I don’t know what to say,” said Owens, whose Lucas Oil Series-leading six triumphs this season have all come in the last 13 events. “The car was super good all night, and it’s great to win here in front of my car owner and this tremendous crowd.

“The track was probably the best I have ever seen it from start-to-finish. We could run anywhere on it. I don’t know what it is about this place, but for some reason we can get around here pretty good.”

Owens was happy to see the 50-lapper run uninterrupted from lap four to the finish.

“I got by Earl early on (for the lead) and then we had that one caution,” Owens said. “Then I got into some big-time traffic and Scott caught me. We had a heck of a race for a while, and everybody out there was giving everybody plenty of room to maneuver.

“Once we got back in front I was hoping the race would stay green and it did. That’s just a testament to the drivers that raced tonight and the track conditions.”

Bloomquist recorded a runner-up finish for the second consecutive night, but could not keep pace with Owens over the last half of the race.

“He Owens was really good tonight,” Bloomquist said of Owens. “I kind of made some adjustments on the car that didn’t turn out liked I had hoped. The car has been solid no doubt. We (just) needed to be a little freer with the car.

“But man, one spot again, that’s all we need. We have a few days off to regroup before we head to Lakeside so we will hope for better results then.”

Pearson, 42, found a fast line late in the distance but didn’t catch the caution flag he might have needed to improve on his ultimate third-place finish.

"I went to the top (groove) and got faster,” Pearson said, “but I had lost so much ground to (Owens and Bloomquist) I wasn'’ going to able to catch them without a caution flag.”

Notes: The race took just under 22 minutes to complete. … Owens now has won six of his last nine starts in Lucas Oil Series action at Wheatland. … Lucas Oil Products founder Forrest Lucas was on hand to watch the evening’s action. “Havng Forrest Lucas here tonight was a real honor,” said Pearson, who has carried Lucas Oil sponsorship for a decade. … The Lucas Oil Series made its second and final trip to Wheatland for 2014. ... The event was a part of the Lucas Oil tour’s Bad Boy Mowers TV Challenge points race … Justin Asplin of Birch Tree, Mo., was the overall fastest qualifier in the split time trials for 41 cars. He went on to finish second to Pearson in the first heat and placed 16th in the feature. … Four Lucas Oil Series regulars had to use a provisional start the feature. Eddie Carrier Jr. of Salt Rock, W.Va., and John Blankenship of Williamson, W.Va., employed points provisionals, while Papich and Jared Landers of Batesville, Ark., relied on emergency provisionals.