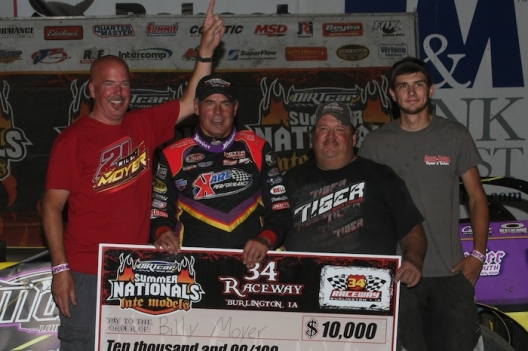 WEST BURLINGTON, Iowa (July 12) — The Summernationals King knocked off another one, this time topping a pair of fellow Iowa natives.

Turning up the heat on Chris Simpson past the halfway point, then keeping any hopes of a Brian Birkhofer charge in check, Moyer led the final 14 of 40 laps Saturday at 34 Raceway for a $10,000 victory and his series-leading 88th career victory.

"We just worked out butts off here on the pits trying to stay on top of the car, there, and not knowing much about this place, everything was pretty much a guess," said Moyer, who along with other drivers was hurried by officials worried about threatening weather. "When things are going your way … things are clicking along there. I don’t know, everything worked out. I don’t know if we had the best car or not. I had to work my butt off, I know that.”

The polesitting Moyer — who got a terrible start and dropped back to fifth on the first lap before recovering — notched his fourth series victory in his last five series starts and his sixth victory during this year’s Summernationals, which has just five races remaining.

The runner-up Birkhofer, of Muscatine, appeared ready to give Moyer a run in the final dozen laps, but it never materialized and he fell two seconds shy of a serious bid for his third Summernationals victory.

“We probably had a fourth- or fifth-place, just guys dropping out," Birkhofer said. "We weren’t too bad. We had a little bit of something for Moyer, and he picked 'er up there at the end. He had the best car."

The third-finishing Simpson, of Oxford, led the first 26 laps from outside the front row, building a comfortable lead at times, but he jumped the turn-three cushion on the 27th lap was was third by the time he recovered. He was a distant third at the checkers.

“Moyer got underneath me there and I said, 'I don’t want to lose.' So I just barrelled it in there," Simpson said. "I seen the cushion and I just jumped it (and) got over it. Luckily, I saved it, I didn’t think I was going to get it saved. All in all, that’s a good run. We just couldn’t rotate across the center (of the corner) as good as them, but I’m happy. We got $3,000, we’re going home with one piece."

Brandon Sheppard of New Berlin, Ill., and Tanner English of Benton, Ky., rounded out the top five while Ryan Unzicker tightened the $25,000 title chase with a sixth-place finish.

Series points leader Shannon Babb of Moweaqua, Ill., who led Unzicker by 28 points entering the event, was among series regulars who made early departures. Babb abruptly headed for the turn-two exit on the 12th lap when his engine shutdown. The motor refired in the pits and he tried to return to the action and salvage more points, but without a caution to allow him back on the track, he never made it.

Two cautions slowed the race, the first for a slowing Jay Johnson on the ninth lap and then shortly after the ensuing restart when an infield tire got knocked onto the racing surface in turn two.

Officials hustled the program along with threatening weather approaching from the northwest. The checkers fell at 8:25 p.m. and the skies opened up by 9 p.m. as fans and teams filed out of the speedway.

For the second straight night, series director Sam Driggers is hustling drivers to beat oncoming weather. The program has been zipping along and Late Models were moved up to second in the feature lineup. ... Billy Moyer won Farmer City's Friday feature amid sprinkling rain throughout 40 laps. ... At 34 Raceway, Moyer got the pole in the redraw of heat winners with Chris Simpson and Brian Shirley starting second and third. ... Provisional starting spots went to Steve Lance Jr., Mark Burgtorf, Ray Guss Jr. and Gary Christian.

Polesitter Jason Rauen built a half-straightaway lead by halfway and cruised to victory. Also transferring was Dustin Griffin, who went from fourth to second coming to the white flag. The third and final spot went to Denny Woodworth, who narrowly edged outside front-row starter Skip Frey. Frey held the second spot most of the way after the first start was scrapped when he slipped over the banking between turns one and two.

With the outside starting spot again the best position, Brian Shirley grabbed the lead and led polesitter Bobby Pierce all the way. Brandon Sheppard briefly held the second spot but settled for third while Jason Feger was a distant fourth, transferring with Spencer Diercks. Ray Guss Jr. took a single lap and retired and Mark Burgtorf headed pitside after three laps.

Polesitter and fast qualifier Billy Moyer needed six laps to find a way under Justin Reed, then cruised to a 10-lap victory. Reed ended up pulling off a lap later with a shredded right0rear tires, handing the second spot to Tanner English. English was followed by fellow main event transferrees Jay Johnson, Jason Riggs and Brian Harris in the caution-free heat.

Chris Simpson got the jump on polesitter Shannon Babb from outside the front row and led all the way. While Simpson edged away late, Babb had his hands full with Brian Birkhofer before securing the second spot. Birkhofer also transferred to the main event along with Ryan Unzicker and Todd Frank, who was a distant fifth. The first start was called back, drawing a first-lap yellow.

Billy Moyer of Batesville, Ark., set fast time for his third straight event Saturday at 34 Raceway, earning the pole position for the second heat. Moyer tripped the clock at 15.286 seconds at the 3/8-mile oval. Series points leader Shannon Babb of Moweaqua, Ill., and las year’s series winner at 34 Bobby Pierce of Oakwood, Ill., are the other heat polesitters set by qualifying.

The series makes it second and final stop in Iowa at 34 Raceway just across the Mississippi River from Illinois, which hosts have the series events.

Three-time champion Shannon Babb of Moweaqua, Ill., enters the race with a 28-point lead on Ryan Unzicker of El Paso, Ill., as contenders for the $25,000 title have filtered out to just a few drivers with six series races remaining.

Among the top contenders will be multiple-series winners Brian Birkhofer of Muscatine, Iowa, and Billy Moyer of Batesville, Ark., who has won three of his last four series starts.

Billy Moyer’s Friday night victory amid sprinkling rain at Farmer City Raceway gave him a series-leading 87 career victories, one more than Shannon Babb. … Babb appeared in danger of losing his 11-point lead at Farmer City when battery failure forced him out of a heat race, but he rallied from 19th to third in the main event while Ryan Unzicker finished seventh. … Chris Simpson of Oxford, Iowa, comes to 34 Raceway fresh off a Friday night victory in a rare UMP DIRTcar-sanctioned Late Model event at Lee County Speedway in Donnellson, Iowa.