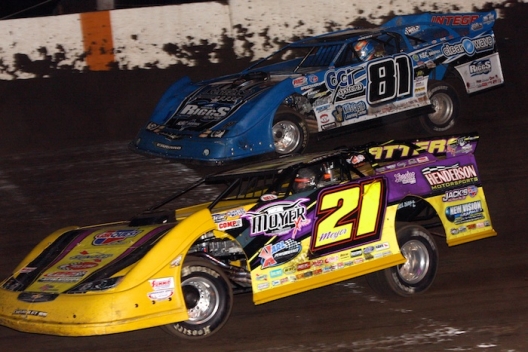 FARMER CITY, Ill. (July 11) — Taking the lead when polesitter Brian Shirley left the door open on the first lap, Billy Moyer of Batesville, Ark., burst through and raced to his fifth UMP DIRTcar Summernationals victory of the season and series-leading 87th of his career.

When Shirley drifted high in turn two, the third-starting Moyer pounced and beat him down the backstretch, then stayed ahead of a tight battle among the rest of the top five for a 40-lap triumph and $10,000 payday.

Moyer not only beat a 22-car field but persistent light rain that briefly delayed the start of the race, hampered his vision when he ran out of tearoffs and caused an extended lap-27 caution because of the moisture accumulating on the track during the slowdown laps. Track-packing equipment joined the field on the track during the yellow-flag period to help dry the surface for about 10 minutes.

With Moyer racing back to a big lead following the lengthy caution, he overcome a rash of lapped traffic late to leave fifth-starting Bobby Pierce of Oakwood, Ill., two seconds behind at the checkers. Series points leader Shannon Babb, who took a provisional starting spot after battery failure doomed his heat race run, rallied from 19th to finish third and stretch his lead in the $25,000 title chase.

Mike Spatola of Manhattan, Ill., who started outside the front row and slipped out of the top five, came back to finish fourth with Kevin Weaver of Gibson City, Ill., rounding out the top five.

“You just gotta have patience," Moyer said of facing the wet 40-lapper, "and I’m usually pretty good at that, just trying to hold yourself back and not make any stupid moves. Really, I couldn’t see. It was kinda, I guess, raining the whole time, spitting, I think, you know, because the vision wasn’t good the whole race really. It was just hard to see. The track got real slick on some spots. You just kind of had to chase a little bit of the moisture around.”

Pierce had a last-gasp hope when Moyer struggled with a few slower cars late, but it didn't come to fruition.

“To be honest, I wasn’t really sure (I could catch him), because I know Billy, he knows his way around lapped cars pretty good, and I knew it was a matter of time before he got around him," Pierce said.  “If I was a little bit closer to him, then maybe I could’ve got him, but he pulled me so good, he was so good on the starts, and he just knows this track so well, too.

"He’s raced here forever. He’s really got something going for him on the kind of tacky tracks like this. That motor of his was kicking pretty good."

Three contending drivers weren't among the top five at the finish, including two who had flat tires with 13 laps remaining.

Jason Feger of Bloomington, Ind., got rolling on the high side in the first 15 laps, but he slipped back to fifth on lap 17 and faded before retiring on the 27th lap.

Shirley, of Chatham, Ill., got caught in the pits while changing a flat right-rear tire during the lap-27 caution. Running third, he rolled around with a flat tire initially, hedging his bets that that rain could force the race's conclusion 13 laps shy of the scheduled 40 laps. He eventually ducked into the infield for the tire change, rejoined the race as it was going back to green and ended up eighth.

Seventh-starting Brandon Sheppard of New Berlin, Ill., was cutting into Moyer’s lead past the halfway point, but a flat right-rear tire during the lap-27 caution knocked him out of the second spot. He came back to finish sixth.

The feature was slowed two cautions, the first when the initial start was called back and the second when Torin Mettille ended up facing the wrong way on the frontstretch on lap 27.

The series continues Saturday with a $10,000-to-win event at 34 Raceway in West Burlington, Iowa.

Outside front-row starter Kent Robinson won the B-main to transfer to the feature along eighth-starting Daniel Flesser, who overtook polesitter Tanner English in the final laps. Rain sprinkled throughout the race with the street stock feature next and the Late Model feature to follow.

In the redraw among heat winners, Brian Shirley is on the pole for the main event with Mike Spatola alongside. Billy Moyer and Jason Feger start in the second row. ... Shannon Babb will start near the tail of the B-main after battery failure knocked him out of the lead in the third heat. ... If Babb has to take a provisional, it would be his first on the series. ... With weather threatening, Farmer City is in hurry-up mode. A few sprinkles fell during the heat race and skies are darkening to the northwest. ... Late Models are the only division with a consy with the Late Model main slated

Mike Spatola got the jump on polesitter Kevin Weaver and led all 10 laps. Weaver hung with Spatola bfut couldn't find a way past in settling for second while McKay Wenger and Scott Bull got the other two transfer spots. There were no cautions.

With polesitter and series points leader Shannon Babb shutting down because of battery issues on the fourth lap, Jason Feger inherited the lead and led the rest of the way. Babb's engine emitted a few loud pops on the previous lap. Brandon Sheppard was second while Bob Gardner, who gave Babb a hard run on the first lap, was third, one spot ahead of final transferree Torin Mettille.

With a few light rain sprinkles falling, polesitter Brian Shirley raced to victory, edging away from fellow front-row starter Daren Friedman. Ryan Unzicker was further back in third and Billy Drake got the final transfer spot.

Billy Moyer of Batesville, Ark., the only four-time race winner on the Summernationals, topped 33 qualifiers Friday at Farmer City to earn the pole for the first heat race. Moyer’s lap of 12.357 seconds on the quarter mile oval was best by nearly four-tenths of a second.

Other heat race polesitters: Brian Shirley of Chatham, Ill.; Shannon Babb of Moweaqua, Ill.; and Kevin Weaver of Gibson City, Ill. The top four finishers from each of four heats transfer to the main event.

After a two-year break from hosting a Summernationals event, the quarter-mile Farmer City Raceway is back on the tour and ready for its 23rd series event.

Three-time champion Shannon Babb of Moweaqua, Ill., who extended his points lead to 11 with his third series victory Thursday at Macon Speedway’s Herald & Review, will continue his battle for the $25,000 title with Ryan Unzicker of El Paso, Ill., and Brian Shirley of Chatham, Ill., in what’s shaping up to be a three-driver chase.

With 33 cars entered, time trials will be split into two groups followed by four heat races and two consolation races. Provisional starters round out the 22-car field.

It’s the first time since 2006 since Macon and Farmer City have hosted back-to-back series events. … The race continues some intrigue to the rivalry of 40-year-old Shannon Babb and 17-year-old Bobby Pierce after a Macon collision sent Pierce into the turn-four concrete. Babb had hinted that he had some payback for Pierce after a July 1 slide job on Babb at Belle-Clair Speedway in Belleville, Ill., but he didn’t call it that in Macon’s postrace interview. … Four-time series race winner and six-time Summernationals champion Billy Moyer chose Farmer City over Tri-City Speedway in Granite City, Ill., which is hosting a $10,000-to-win Lucas Oil Late Model Dirt Series event. Moyer dozens of victories between the two tracks. … Steve Lance Jr. of Cuba, Ill., is coming off his second straight eighth-place finish on the circuit, his best performances on the tour; he gained 11 positions Thursday at Macon.