Information provided by: Series and staff reports (last updated July 12, 10:00 am)
O'Neal fights off Owens, claims thriller at Tri-City
Battle at the Beach 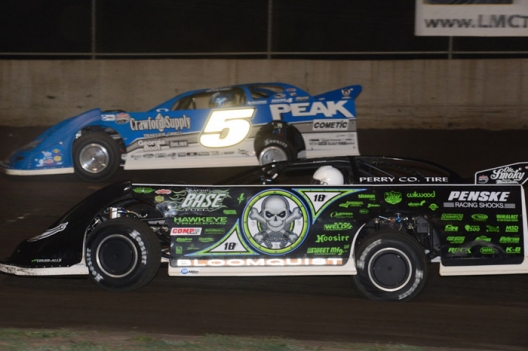 One day after his birthday, the Martinsville, Ind., celebrated with a thrilling victory at Tri-City Speedway, earning $10,000 in the Battle of the Beach.

The fourth-starting O’Neal overtook Clint Bowyer Racing teammate and outside front-row starter Steve Francis of Ashland, Ky., on the 26th of 50 laps, then held off a charge from his closest championship contender, the three-time and reigning series champion Jimmy Owens of Newport, Tenn., topping Scott Bloomquist of Mooresburg, Tenn., at the checkers.

O’Neal won the battle among the top three drivers in series points for his fifth series victory of the season while Bloomquist and Owens were followed across the line by 12th-starting Brian Birkhofer of Muscatine, Iowa, and Francis.

"What a win for this Clint Bowyer Race team tonight! I saw Jimmy pull alongside a few times and I thought I had better get going,” O’Neal said. “That top line was going away. The car handled really well whether we ran low, in the middle, or the top. It got pretty loose there at the end.

“I kept my pace pretty good, there were a few lapped cars that actually helped up keep the lead. The track was in excellent shape tonight, and I hope the fans got their money's worth.

Bloomquist, who started alongside O’Neal in the second row, overcame a few early setbacks to finish second. He fell back as far as fifth.

“We had a really good car; the track was just spectacular all night,” Bloomquist said. “I had a run there a few times, and I thought I was going to get both Don and Jimmy for the lead. Another second place finish for us tonight. It feels good knowing we have a car capable of winning every time out.”

Owens, who ended a four-race streak of first- or second-place finishes on the series, was going back-to-back victories after his 17th-to-first run at 201 Speedway in Sitka, Ky., seven days earlier.

“Wow, what a race,” Owens said. “At one point there was five of us racing for the lead. I tried a few times to slide up there in front of (O’Neal), but I was going to race him clean. Then I got into the wall and that ended any chance I had of passing him for the win.

“Then here comes Scott and he got underneath me for second. We had a good point's night and we'll head down to Wheatland tomorrow and try to get us another win there.”

The race was slowed by two cautions. A lap-29 yellow flew for Eddie Carrier Jr. of Salt Rock, W.Va. and John Blankenship of Williamson, W.Va. Earl Pearson Jr. of Jacksonville, Fla., drew a lap-30 caution when he suffered a flat right-front tire.