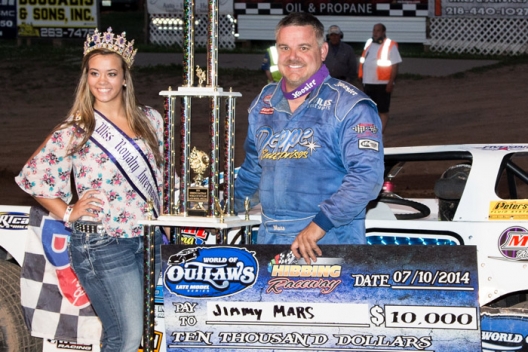 HIBBING, Minn. (July 10) — Jimmy Mars waited a long time for the opportunity to return to Hibbing Raceway for a major event. When the Menomonie, Wis., driver finally got that opportunity at Thursday night’s Wild West Tour opening round race, he didn't waste it.

Competing at Hibbing’s 3/8-mile clay oval for the first time in nearly two decades, Mars overtook Darrell Lanigan of Union, Ky., amid heavy traffic on lap 38 of the 50-lap main event and led the remaining distance to earn a $10,050 victory in Hibbing's first-ever World of Outlaws Late Model Series race.

“This is one of the tracks that when I was younger and racing more on a local level, we would come up here and run a lot of their shows,” said Mars, whose Deppe Enterprises-sponsored race team is based roughly four hours from the northeast Minnesota track. “It just seems like we've always had other stuff going on so we couldn't make it back here. But there's a real good fan base up here and we've got a lot of friends up here. To win this one is definitely special for us.”

Mars' self-designed MB Customs machine crossed the finish line 3.018 seconds ahead of Tim McCreadie of Watertown, N.Y., who moved by Lanigan for second on lap 39. Lanigan, the WoO LMS points leader who paced the race's first 37 circuits after moving from third to first on the opening lap, slid back to third at the finish just ahead of eighth-starting Morgan Bagley of Tyler, Texas. Sixth-starting Chub Frank of Bear Lake, Pa., settled for fifth after climbing as high as second.

After falling as far back as fourth from his pole starting spot early in the race, Mars’s hard-compound tire choice allowed him to begin his march back toward the front just before the race's midway point. He battled back and forth with McCreadie and Frank for the second spot between laps 15 and 30 before finally emerging ahead and setting his sights on Lanigan.

Mars began to pressure Lanigan at lap 35 and was in position to look under the leader when Lanigan attempted to move around a group of slower cars on lap 37. Mars took advantage and pulled ahead of Lanigan exiting turn four on lap 38, then used a strong run into turn three the following lap to slide under the group of cars that had held up Lanigan.

Mars cruised from there, successfully negotiating the slower traffic as he pulled away to the finish.

“I didn’t want to fall back, but I knew I just had to be patient with what I had for tires,” said Mars, who claimed his first WoO LMS triumph since March 31, 2012. “When a driver like Darrell gets out ahead like that you do get worried, but toward the end we got really good and the lapped traffic kind of worked out in our favor.

“Anytime you can race against these guys and beat them, I mean Darrell’s been on a tear. Eckert, McCreadie, Chub — I’m glad to see he’s running good here. I wish I could run more of these races because this is unbelievable.”

In an emotional victory lane celebration, Mars dedicated his victory to family friend Marnie Clement, who died May 14 after a battle with cancer.

“We had a tough month with Marnie passing away,” said Mars. “We weren’t racing there for a little bit so we could support her and take care of some her last wishes. That made it tough on us, but sometimes there’s a lot more to life than racing.”

Like Mars, McCreadie’s Sweeteners Plus Rocket Chassis hit its stride during the race’s middle portions. But he couldn’t seriously challenge Mars late in the race as he struggled to keep pace in traffic.

“But for Sweeteners and our whole team, we’ll take this and run with it. We haven’t been really competitive in the past four or five races, so this is a step in the right direction.”

The third-starting Lanigan used a nifty three-wide move to overtake both Mars and second-starting Rick Eckert of York, Pa., on the race’s opening lap and appeared to be headed for his eighth WoO LMS victory of the season as he stretched his lead through the race’s middle portions. But Lanigan’s Gotta Race-sponsored Club 29 Race Car didn’t move through traffic as well as his challengers as he faded in the closing laps.

“Just trying to make a move on the outside to get by some of that traffic and let Jimmy sneak by there,” said Lanigan, the two-time WoO LMS champion who entered Thursday's race fresh off a $30,000 Firecracker 100 victory June 28 at Lernerville Speedway in Sarver, Pa. “I went back to the top to try to get by him and I let McCreadie get by, too. I probably should’ve stayed in the bottom and followed my line. It’s my own fault.

“It absolutely kills me to lose one like that. But we’ll go to the next one and work twice as hard.”

Notes: The feature, which took the checkered flag shortly after 9 p.m. Central, was slowed by only a pair of consecutive cautions on laps 17 and 18. ... Mars recorded his second overall victory of 2014; his previous win came in the National Dirt Racing League-sanctioned Winter Extreme at Tucson (Ariz.) International Raceway on Jan. 18. ... Overall fast qualifier Jordan Yaggy of Rochester, Minn., made his first start since undergoing reconstructive knee surgery that kept him out of the car, but his night soured with a 21st-place finish in the feature. ... McCreadie, who was the fastest qualifier in the second time-trial group, drove Yaggy’s car in last month’s UMP DIRTcar Summernationals event at Cedar Lake Speedway in New Richmond, Wis., while the young driver was sidelined. … WoO regular Shane Clanton of Zebulon, Ga., had to use a provisional to start 23rd but was able to salvage a ninth-place finish. … A huge crowd turned out for the event. … WoO Sprint Car star Donny Schatz was on hand with his Dirt Late Model making his first-ever WoO Late Model start. He won a B-Main and moved forward from the 17th starting spot to finish eighth in the feature. … The WoO Wild West Tour continues on to Deer Creek Speedway in Spring Valley, on Saturday (July 12) before heading to Brown County Speedway in Aberdeen, S.D., Tuesday (July 15) and River Cities Speedway in Grand Forks, N.D., Friday (July 18).