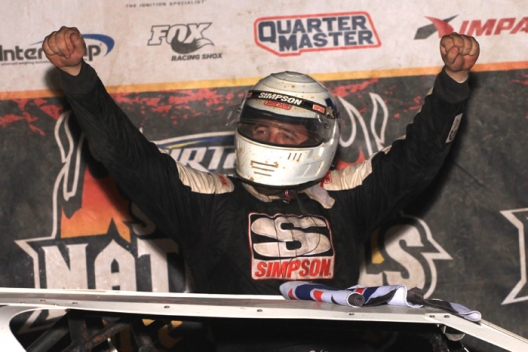 WAUSEON, Ohio (July 14) — Zack Dohm of Cross Lanes, W.Va., settled into second place at the start of Saturday night’s 20th annual Birthday Race at Oakshade Raceway and, with the 3/8-mile oval’s surface already taking rubber along the inside groove, thought there was a good chance he would stay there for the duration of the 60-lap feature.

“I knew it was gonna be tough to pass anybody,” Dohm analyzed.

But opportunity knocked for Dohm on lap 11 when race-long pacesetter Kent Robinson of Bloomington, Ind., slipped high rounding turns one and two and he seized the moment, surging threw the open door to take the lead and march on to a $10,000 victory that gave him a shocking sweep of the track’s doubleheader that concluded the 2018 DIRTcar Summer Nationals.

For a 29-year-old driver who had never even seen Oakshade before pulling in the pit gate, winning Friday’s $5,000 Prelude to the Birthday Race 40-lapper and Saturday’s headliner was an absolute thrill.

“It’s an awesome weekend,” Dohm said after completing his $15,000 Oakshade debut. “I figured we’d come up here and run up front, but I never dreamed we’d win ‘em both.”

Robinson, 31, spent the remainder of the distance chasing Dohm, even drawing right up to the leader’s back bumper midway through the race when Dohm’s slowed behind lapped traffic. But K-Rob was unable to catch the same break he presented Dohm earlier in the event and couldn’t stay with Dohm following the A-main’s lone restart on lap 46, leaving the defending Birthday Race champion to settle for runner-up money, 1.628 seconds in arrears of Dohm.

Frank Heckenast Jr. of Frankfort, Ill., finished third, hot on Robinson’s tail at the checkered flag. It was the 30-year-old’s sixth consecutive top-five finish to close the Summer Nationals and gave him both the $2,000 Champions’ Week points title and a career-best second-place finish in the Hell Tour’s overall points standings.

Shirley, 37, entered the weekend having already clinched the $25,000 Summer Nationals title for the second time in his career, but he was officially crowned as the champion after Saturday’s feature during a ceremony on Oakshade’s frontstretch.

“I just can’t put into words the effort that it took to go to all these races for a month,” said Shirley, whose previous Summer Nationals championship came in 2012. “I’m just happy to come out on top. It’s just a good deal all around."

While the fifth-starting Shirley moved up one spot at the initial green flag and raced in fourth place for the entire distance, Dohm, who started from the outside pole alongside Robinson, felt fortunate to retain second place when the feature began.

“I rolled in the first corner farther than (Robinson) and I was just hoping to maybe get my left sides in some rubber,” said Dohm, who drove an Audie Swartz-built car owned by his father Tim. “My car felt pretty stuck, but he got a nose on me.

“I told my brother (Nick) before the race to tell me to get down (entering turn three on the opening circuit) if there was like a car length of room between (third-starting) Heckenast and K-Rob. I knew if I was going to come out of there second on the first lap I I needed to get down if I had room. Well, I was coming down the back straightaway and he was telling me to get down, so I just turned in and got in line behind him.”

Overtaking Robinson, however, became a game of patience and luck.

“I could drive up on him, but when you get close to somebody your car’s not the same so you get all the way up on him and then it’s loose,” Dohm commented. “You could end up sliding out of the rubber, so you back up a little bit and then your car’s good again and you catch him.

“Well, I saw him push one time (in turns one and two). I guess he was just too tight because his front wheels were cut left going around one and two and he pushed up a little bit. I stayed low and I closed in on him down the straightaway but he stayed ahead, so after that I tried to stay close enough to capitalize on that the next time. I thought, Man, I gotta get close to him in case he does that again. That’s gonna be our only chance.

“Thank God it happened,” he added. “He pushed across the track and out of the rubber (on lap 11), and I hooked (the rubber) and was able to get him down the backstraightaway.”

Robinson acknowledged making a mistake that effectively cost him a shot at his second straight Birthday Race triumph.

“I guess you could say I got tight at the wrong spot on the racetrack,” Robinson sullenly said. “I was battling the car from the beginning. I knew I wasn’t that good — I just missed the setup. I knew that the rubber would come, but I didn’t know it was that hard from the beginning and I was just too tight (for the conditions). I got out there and thought I could set a decent pace, but once the right-rear tire fired it just got even worse.

“I just kind of slipped getting into one (on lap 11). I kind of recovered, but when I got back in the throttle it started to push. It was my decision to just try to drive out of it, and it didn’t come out of it. It actually made it worse, and I drove right out of the rubber. I mean, it’s no other way to say it. It was a mistake on my end, and also a mistake on setup that was ultimately my decision.

“We’ll learn from it. We’ll take from notes from it,” he added. “It’s always a bummer to get passed, but to get passed for the lead just sucks.”

Dohm did experience some anxious moments during the race’s second half when he found himself in position to lap Jon Henry of Ada, Ohio. He caught Henry on lap 27 and simply stayed behind him until Henry finally slid out of the inside lane on lap 44 and then slowed on lap 46 to bring out the feature’s only caution flag.

“Once we caught them lapped cars, Henry, (Jason) Feger and the 06 (Jake Rendel), the car was really good catching them and then it was awful (behind them),” Dohm said. “I actually missed the rubber like twice getting down in there — I missed it once in one and two and once in three and four. It wasn’t too bad in one and two, but in three and four it was pretty good … I had to be out of the gas for a good amount of time.

“I don’t know how close (Robinson) was, if he could’ve stuck it in there and booted me out of the way or not, but I try to race everybody with respect because I want to earn everybody else’s respect so when it comes down to it, to a situation like that, they’ll give me respect. Fortunately we held on, and then that caution got us out of dealing with lapped cars.”

Heckenast, meanwhile, was hot on Robinson’s heels from almost immediately after Robinson fell to second place. But, with Heckenast well aware of the Champions’ Week points scenario — he entered the night tied atop the standings with Billy Moyer of Batesville, Ark., who finished ninth — he didn’t force the issue and finished third.

“Robinson gave me four or five opportunities to pass him, but then we could’ve hit or hit the inside pole and finished 20th,” said Heckenast, who completed the entire Summer Nationals schedule for the first time in his career. “We just took our third and won the weekly points and passed Feger for second (in the overall standings), so that was cool.

“It’s been really good,” he continued, reflecting on his month-long Hell Tour odyssey. “I can’t thank everybody enough for making me stay (on the series) and pushing me along. I definitely realize that you got to run it one full time before you try to win it. I’ve always tried to bounce in-and-out thinking it wasn’t really as hard to run the whole thing, but man, now I know what I gotta do to do it again. And you need luck … you gotta have luck the whole first week, which we didn’t have.”

Frank Heckenast Jr. ran smoothly in the lead from start-to-finish, beating Brandon Thirlby by a commanding margin of 3.869 seconds.

Zack Dohm picked up right where he left off on Friday night, scoring a convincing wire-to-wire win by 1.804 seconds over Devin Shiels. A caution flag flew on lap four when Brian O’Brien spun in turn four.

Temperatures have climbed near 90 on Saturday, but overcast skies and a light breeze have helped keep the conditions a bit more bearable for the DIRTcar Summer Nationals finale. … General admission for the $10,000-to-win event is again a Summernationals-low $12. … Saturday’s 47-car field is the largest of the 2018 Hell Tour, exceeding Friday night’s 43 entries. … Drivers joining the action on Saturday include Travis Stemler of Ionia, Mich., who scored a $2,500 DIRTcar-sanctioned victory Friday at I-96 Speedway in Lake Odessa, Mich.; Brandon Thirlby of Traverse City, Mich., who retired early from I-96’s Friday feature; and Corey Conley of Wellsburg, W.Va. … Conley is parked alongside fellow Mountaineer State driver Zack Dohm of Cross Lanes, W.Va., who will look for a sweep of the weekend after winning Friday night’s $5,000 A-main in his first-ever start at Oakshade. … Series champion Brian Shirley of Chatham, Ill., who will be officially crowned in a post-race homestretch celebration, is one of four drivers who will finish the Hell Tour with perfect attendance, joining Jason Feger of Bloomington, Ill., Frank Heckenast Jr. of Frankfort, Ill., and Rusty Schlenk of McClure, Ohio. … Australian Paul Stubber has missed only one Summer Nationals event and is locked into an eighth-place finish in the points standings. He is sitting this evening’s action out, however, to let his crew chief, 25-year-old Aussie Kye Blight, drive his XR1 Rocket machine. “He’s just busted his ass for the whole month to help me race so I’m going to put him in it tonight,” said Stubber, who also added with a smile: “He’s been telling me what to do all month, so we’re gonna see if he practices what he preaches.” … Kent Robinson of Bloomington, Ind., who won last year’s Birthday Race, retired from Friday night’s feature when he decided he wasn’t making headway. He pulled off the track early without mechanical trouble in last year’s weekend opener as well and then came back to win the 60-lapper.

The UMP DIRTcar Summer Nationals points race comes to an end Saturday night with the running of the 20th annual Birthday Race at Oakshade Raceway, a series stalwart that has hosted the Hell Tour every year since 2000. Only once, in 2002, was the speedway’s event not the finale of the Summernationals.

Shirley enters the evening’s action having already clinched his second career Summer Nationals title. The $2,000 Champions Week title sponsored by VP Racing Fuels, however, will come down to the wire with Moyer and Frank Heckenast Jr. of Frankfort, Ill., tied with 275 points and Schlenk just behind with 270 points.

Saturday night’s program will feature two split time trials with drivers in the first group vying for positions. Hot laps are scheduled to begin at 6 p.m. and racing is set to get the green flag at 7:30 p.m.