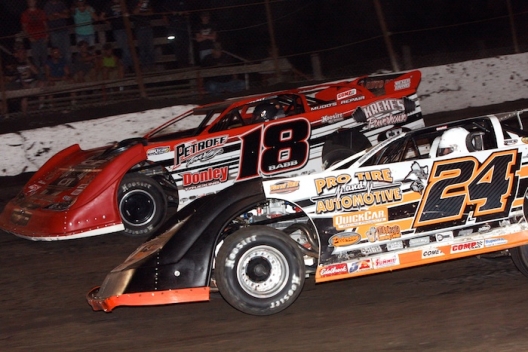 Series points leader Shannon Babb of nearby Moweaqua, Ill., regained the lead from title rival Ryan Unzicker of El Paso, Ill., on the 57th lap and led the rest of the way to become the first five-time winner of Macon Speedway’s Herald & Review 100.

“We’ve growed up here and raced here a lot, so it means a lot to win this thing,” said Babb, who survived a scrape with polesitter Bobby Pierce and pulled away over the final 30 laps. “You know, it’s tough running 100 laps here and staying out of trouble.”

The three-time series champion inched further ahead of Unzicker in the $25,000 title chase and notched his 86th career series victory, tying him atop the all-time list with Billy Moyer of Batesville, Ark., the previous night’s series winner from Terre Haute (Ind.) Action Track who watched Babb win from the infield.

Unzicker took the lead from Babb on the 34th lap when he squirted through a backstretch hole, but Babb — finding the high line midway through the race — went back around Unzicker and pulled away to win by more than a straightaway on the tight fifth-mile oval were trouble is just a fender away.

The seventh-starting Unzicker settled for second — his series-leading sixth runner-up finish without a victory — while Brian Shirley of Chatham, Ill., finished third. Dennis Erb Jr. of Carpentersville, Ill., who started 16th and broke into the top five before being the victim of a lap-36 caution, again rallied to finish fourth while former race winner Matt Taylor of Springfield, Ill., rounded out the top five. Kevin Weaver of Gibson City, Ill., the race's only other four-time winner, was sixth.

Pierce of Oakwood, Ill., wasn’t around at the finish. He faded to fifth early in the race, then got rolling on the high side and was trying to take second from Babb on the 51st lap when he pulled to the outside of Babb in turns three and four. Babb mashed the gas and his No. 18 shoved Pierce’s No. 32 into the turn-four wall, ending his night.

Pierce led the first three laps before the low-running Babb, who started third, took over and stretched to a half-straightaway lead erased by caution.

By then, Unzicker was up to second and ran side-by-side with Babb over the next several laps before traffic forced Unzicker to briefly abandon his lower groove and follow Babb. But amid traffic on lap 34, Unzicker took the point from Babb and led through the race’s middle stages.

“We switched (grooves) two or three times,” Babb said. “I was looking for the crumbs in the middle. I started on the bottom and got out there, and got to the top, started diamonding (the corners), and I seen Ryan come back.”

But after the caution for Pierce’s demise, Babb got rolling up top and swept around Unzicker on the 57th lap for a lead he’d never give up.

“I think that everybody’s tires polished up after that caution. I know mine did,” said Babb, who has captured Macon’s Summernationals stops four times in six years. “I just got up there and started bouncing off the wall, getting a little better run, and those were the best laps I could make and try to be consistent.”

Unzicker wasn’t sure how his tire combination was different from Babb’s, but he wondered if that helped determine the outcome as Babb pulled away after the fifth and final yellow on lap 71.

“He might’ve out-tired me there, and the last 25 it was going away. But the car was good enough put us up front and get a second.”

Besides the lap-51 caution for Pierce, four yellow flags slowed the feature, the first for a scrapped initial start and the second on lap 21 for debris when a nerf bar sat in the middle of the track in turns three and four.

The third appeared on lap 36 when Jim Moon stumbled off turn four and bottled up the fourth-and fifth-running Brandon Sheppard and Erb, leaving Erb briefly at a standstill in turn four and sending him to the rear of the lead-lap cars.

Sheppard slowed on the 71st lap, giving up the third spot and pulling to the infield with a broken rear end.

While Pierce’s car was towed away at the halfway point, he made sure Babb saw his departure, climbing from his car and gesturing to Babb that he didn’t appreciate the contact. It was 10 days earlier, following Pierce’s lone series victory at Belle-Clair Speedway in Belleville, Ill., that Babb suggested the 17-year-old had payback coming after a daring slide-job pass on Babb to take the lead.

Babb denied Belleville's incident had anything to do with Thursday’s contact.

“I’ll tell you the truth, I think he probably should’ve hit the brakes,” Babb said. Was it intentional? “No, I was just, I thought I was clear high on that deal.”

Billy Hough won a race-long, side-by-side duel with fellow front-row starter Chris Dick to win the consolation. Guy Taylor sneaked under Dick in the final laps to steal the final transfer spot. Two cautions slowed the action. A lap-seven yellow when Steve Kester (right front) and Kyle Hammer (left rear) got tangled on the frontstretch and had to be disconnected. Third-running Roger Brickler spun on the lap-seven restart.

Outside front-row starter Brian Shirley got the jump on polesitter Brandon Sheppard for a 10-lap victory Kyle Logue was further baack in third while Dennis Erb Jr. got the final transfer spot.

Polesitter Shannon Babb took the early lead and pulled away for a victory over series title contender and fellow front-row starter Ryan Unzicker. Matt Taylor and Jim Moon got the other two transfer spots as fourth-starting Rich Bell got shuffled out of contention early in the caution-free affair.

Making his Macon debut, Oklahoma invader Gary Christian went under high-running polesitter Kevin Weaver on the fifth lap and led the rest of the way. Steve Thorsten dropped Weaver to third on the eighth lap and Ryan Little got the fourth and final transfer spot. Tail-starting Kyle Hammer spun along between turns one and two on the first lap to draw a caution, then spun again but kept rolling on the next start.

Fast qualifier Bobby Pierce won from the pole, cruising to victory far ahead of runner-up McKay Wenger, who was making his Macon debut. Mark Voigt was third and Greg Kimmons got the final transfer spot in the caution-free 10-lapper.

Rebounding from a wreck the previous night, Bobby Pierce of Oakwood, Ill., was the only driver among 29 entries under the 11-second mark in qualifying Thursday for Macon Speedway’s Herald & Review 100.

Pierce tripped the clock at 10.949 seconds and will start on the pole of the first heat. Other heat race polesitters: Kevin Weaver of Gibson City, Ill., Shannon Babb of Moweaqua, Ill., and Brandon Sheppard of New Berlin, Ill.

Weaver and Babb are the race’s only four-time winners. The top four finishers from each heat transfer to the main event along with two drivers from a B-main and four provisional starters.

The fifth-mile oval hosts the only 100-lapper on the circuit as Babb tries to capture the race for the fourth time in six races. Babb and Kevin Weaver of Gibson City, Ill., are the race’s only four-time winners.

Because it's a small track, the series is breaking the 29-car field into four groups for time trials and heat races. The top four from each heat transfer to the main event while two cars from the B-main join the feature field. Four provisional starters round out the 22-car field.

Jason Riggs of Harrisburg, Ill., one of five drivers to enter all 20 races, is a no-show at Macon. He's expected to rejoin the tour Friday at Farmer City. ... With Shannon Babb finishing third, Ryan Unzicker lost the points lead with his ninth-place finish at Terre Haute. But there were extenuating circumstances as Unzicker drove conservatively after being released from a Florence, Ky., hospital earlier in the day. He suffered a concussion when something struck the chin of his helmet late in Tuesday’s feature at Florence Speedway. He expects to be ready to go at Macon. … Unzicker is still winless on the tour and could become the first driver to win the $25,000 tour championship without a victory in 25 years. … Brian Shirley of Chatham, Ill., comes to Macon with three top-five finishes in his last four starts to gain on Babb and Unzicker in the points chase. … Billy Moyer of Batesville, Ark., who has a series-leading four victories this season and 86 all-time after his victory at Terre Haute, skipped Macon with plans to aim for Friday night’s event at Farmer City (Ill.) Raceway; he's spectating at Macon. ... Kyle Logue of Oreana, Ill., piloting Ron Babb's No. 91, is undefeated at Macon in two starts, a 40- and a 50-lapper. The Babbster Chassis has a Jay Dickens engine. ... Parkland College of Champaign, Ill., brought high school students from its automotive summer camp to get a taste of racing, spending most of their time in the Bobby Pierce pit area.