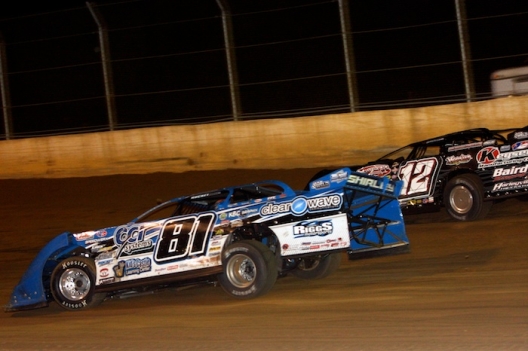 UNION, Ky. (July 8) — After Jason Jameson measured Brian Shirley for several laps, then made a backstretch pass to grab the lead on the 32nd of 40 laps Tuesday at Florence Speedway, it appeared the Lawrenceburg, Ind., driver’s first career UMP DIRTcar Summernationals victory was in the bag.

But when a caution flew to set up a two-lap shootout the checkers, it was anything but over between the front-row starters.

Winning a wild duel after a lap-38 restart, Jameson twice lost the lead and twice regained it from Shirley, finally pulling away off turn four heading for the checkers to win by .684 seconds. Twice Shirley dove under Jameson to take the lead into turn two, and twice Jameson crossed back under as the frontrunners headed down the backstretch.

After leading 31 laps, Shirley began fading as Jameson pulled away late, but he got new life from the late caution flag. He dove hard into turn one on the final green flag and made the last two laps exciting.

“That was just some hard racing here,” said Shirley, the Chatham, Ill., driver who holds the fourth spot in Summernationals points. “He respected me, I felt like I respected him on those slide jobs, and we both finished.

“He just had, maybe a little better car there. I’m not really sure. I felt like we were pretty good. It just ended up breaking the nose a little bit, and the right-front was digging in. As rough as this track is, third’s not all that bad.”

Shirley lost the second spot on the final lap when Eric Wells of Hazard, Ky., slipped underneath, while Kent Robinson of Bloomington, Ind., finished fourth and Justin Rattliff of Campbellsville, Ky., was fifth in a race where most Summernationals regulars struggled.

Series points leader Ryan Unzicker of El Paso, Ill., was helped by attrition — only seven drivers finished on the lead lap on a rugged racing surface — to finish eighth, while his closest pursuer in the points, Shannon Babb of Moweaqua, Ill., gained some ground in finishing sixth.

Unzicker was apparently struck in the helmet by something during the race and attended by medical personnel after driving to the pits. An ambulance took him to a nearby hospital, according to series director Sam Driggers, who didn’t know any more details.

Shirley took the lead at the outset, and it wasn’t long before it was a two-car chase that kept the attention of the fans as many competitors called it quits early on a track that tested equipment and endurance.

Shirley controlled the first half of the race without a serious challenge, but when frontrunners put Unzicker a lap down on lap 22, Jameson drew closer and began to size up the leader. The battle stayed tight over the next 10 laps. Shirley got briefly sideways in turn two on lap 29 and lost momentum, but Jameson couldn’t find a way past.

Finally, on lap 32, Jameson moved past down the backstretch to take over.

“Shirley, he was driving the wheels off that thing, and I was just chasing him the whole time,” said Jameson, who grabbed an unsanctioned victory Saturday at his hometown Lawrenceburg Speedway. “His car, seemed like the longer the race went, the tighter it got. He couldn’t turn in (to the corner); I could rotate the center better than he could, so I figured it was a matter of time when I could run him off (turn) two and get him in three and four, and that’s kind of what happened.

“I was pretty more maneuverable than he was. He kind of would go in there and shove the nose every time, so he’d have to run across the corner and hit the cushion coming off (the corner), so I knew it was a matter of time he’d kind of make a mistake and I’d be there.”

Shirley’s Riggs Motorsports machine wasn’t performing as well as the laps clicked off at the half-mile oval.

“At first we were rocking and rolling there, and then as the race went on, we kept getting tighter and tighter and tighter,” he said. “And I just couldn’t figure out what it was, but I knew the nose was just plowing going into the corner. Then we got (into the pits) and we saw the right-front was just bent straight down.

“What that does is the car goes in the corner, and the nose is pretty much like a shovel. That’s definitely not an excuse. Jameson was good. I’m not going to say that cost us the race. … ”

After a phone conversation with team owner Scott Riggs after the race, Shirley said settling for second in favor of the points chase never crossed his mind.

“We were all about the win,” he said. “The win’s what pays the bills. Second and third’s good, but all in all, Scott’s got us here to win races, not settle for second or third.”

Three yellows slowed the race, the first when the initial start was called back. Ethan Burgess spun in turn two to draw a lap-11 yellow and seventh-running Steve Casebolt’s new Club 29 Race Car stopped in turn two just before the white flag flew.

The 20th series race is scheduled for Wednesday at Terre Haute (Ind.) Action Track, the largest race on the 39-day tour.

Eighth-starting Austin Dillon slid up and under race-long leader Jason Riggs in turn four on the second-to-last lap and won the 12-lap consy. Riggs finished second to transfer to the main event along with third-place finisher James Rice.

In a race with three cars eliminated in a first-lap wreck, Eric Wells won after moving into the outside front-row starting spot. Wells led all the way with polesitter Steve Casebolt just behind in a two-car breakaway. Further back, Jesse Lay and Mike Marlar battled for third with Marlar wrestling it away on the last lap. Steve Kester finished fifth after Dennis Roberson gave the spot up on the last lap, his smoking car eventually rolling into the infield. A lap-seven yellow flew for Kester in turn three. On the first start, outside front-row starter Scott James spun in front of the field in turn four. While some drivers sneaked past, it caught the right-rear of Unzicker's car and smashed the driver's side door of Rod Conley's machine. All three were eliminated. Unzicker and Conley were able to pull off the track; the James machine was towed away.

Fast qualifier and polesitter Jason Jameson built a half-straightaway lead after four laps and cruised to victory in the second heat. With most drivers in the high groove, Justin Rattliff held the second spot all the way from outside the front row, keeping Shannon Babb in check. Behind him, Ethan Burgess and Brandon Sheppard mixed it up in a battle for fourth, finishing in that order while Jason Riggs was sixth, the first non-transferring driver in the caution-free prelim.

Outside front-row starter Brian Shirley immediately took command and grabbed to a 10-lap victory. Fourth-starting Kent Robinson hung with Shirley but never made a serious challenge in finishing second. Robby Hensley was further back in third and transferred to the main along with Jason Papich and Chad Smith, who finished a half-lap behind the leader. Polesitter Brad Neat had a tough heat race. He spun on the first attempted start. When it was called back, he slipped back to third and then got into the backstretch wall on the third lap, knocking him out of the race.

The other two heat race polesitters are Brad Neat of Dunnville, Ky., and Steve Casebolt of Richmond, Ind. The top five from each heat race transfer to the main event.

The 19th race of the Summernationals takes the series back to Kentucky for the second and final time at Florence Speedway, the undersized half-mile oval that’s seen somewhat of a reconfiguration since its last race two weeks ago.

Turns three and four appears about 15 feet wider with the removal of the infield ledge that virtually hung over the track gone the infield tire barriers, once buried, now completely visible.

In looking for his first title, Ryan Unzicker of El Paso, Ill., has a 19-point lead on three-time champion Shannon Babb of Moweaqua, Ill. … Unzicker is winless but has a series-high five runner-up finishes. … Co-promoter Josh King warned drivers the track is very soft where the infield tire barriers were previously placed in turns three and four. ... The entire track got some hard rain in a storm that blew through Monday night. ... Jesse Lay of Walton, Ky., leads Florence’s Super Late Model points over Steve Landrum and Jeff Alsip. … Among 2014 weekly winners expected: John Gill, Greg Johnson and Duane Chamberlain. ... Steve Casebolt of Richmond, Ind., was a late entrant in a recently completed Club 29 Race Car out of the nearby shop of Darrell Lanigan. The Club 29 is Lanigan's version of the Black Diamond Race Car produced by Ronnie Stuckey hin Shreveport, La. ... John Gill hit the wall hard between turns one and two in hot laps and is done for the night. ... Duane Chamberlain loaded after hot laps and scratched from qualifying.